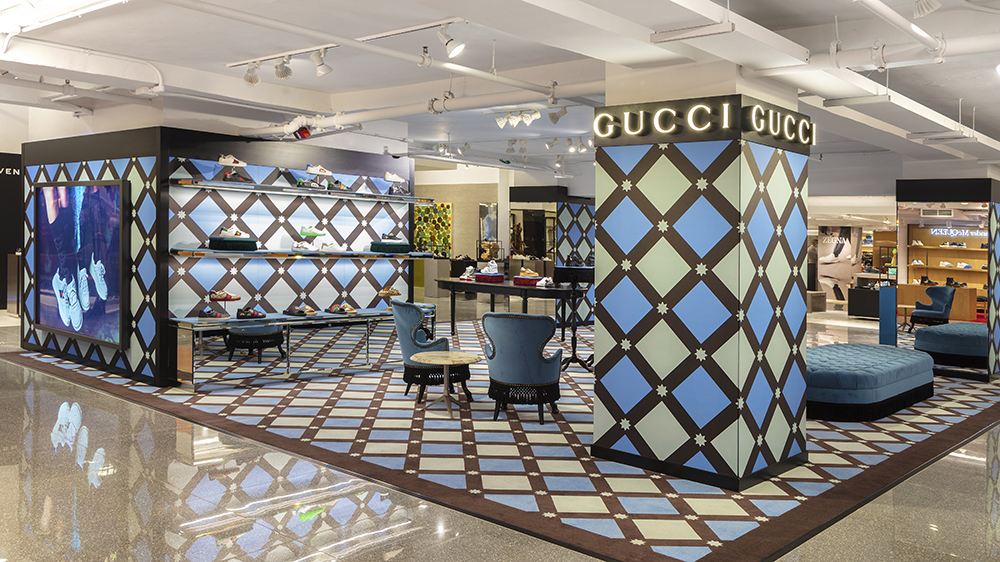 Bloomingdale’s is doubling down on the global sneaker craze—by giving you access to more.

Offering up to 70 percent more space and 10 new luxury boutiques, the company’s renovated men’s shoe floor at its flagship just re-opened for business. The massive sneaker warehouse is now situated a level below its previous location and includes footwear from Gucci, Balenciaga, and Alexander McQueen. As a tribute to NYC—the retailer’s hometown—the floor will also feature a curated hat gallery. The wood-paneled and neon-green-lit space includes exclusive caps from Fantasy Explosion and Smathers & Branson, the former inspired by souvenir hats of the ’80s and ’90s.

The curated hat gallery on the men’s shoe floor.  Bloomingdale's

The luxury boutique spaces immerse shoppers in a world of each brand’s own. From Gucci’s full-on checkered carpeting and matching wallpaper behind its shoe displays to Saint Laurent’s minimalistic layout with contrasting black-and-white marble finishes—the boutiques are masterfully tailored; they include Burberry, Zegna, Salvatore Ferragamo, Valentino, Saint Laurent, Givenchy and Tod’s. Elsewhere on the same floor, you’ll find company-curated set-ups that offer a variety of dressy and athletic styles from other top designers such as Versace, Bottega Veneta and Lanvin. Select boutiques are now open and others are scheduled for early next year, alongside several brand debuts from Off-White to Palm Angels.

A look at one of the casual shoe sections featuring sculpture and unique displays.  Bloomingdale's

Bloomingdales was founded in 1872 and currently operates 33 luxury department stores across the US. In 1886, its flagship store on 59th Street and Lexington Avenue was opened following the company’s decision to move uptown from the Lower East Side. By 1920, the department store took over the entire city block. And since then, the company has expanded its international presence with one location in Dubai, opened in February 2010.

“The Bloomingdale’s 59th Street flagship has always been a destination known for its expert fashion curation and we’re thrilled to welcome our shoppers to the all-new men’s shoe floor,” says Dan Leppo, Bloomingdale’s Executive Vice President and General Merchandise Manager for Men’s, Young World, Home Furnishings & Cosmetics in a statement. The retailer will be hosting activations on the men’s floor on Saturday, December 18—including a customization event with UGG, a Tod’s treat cart and more. Visit Bloomingdales.com for more information.