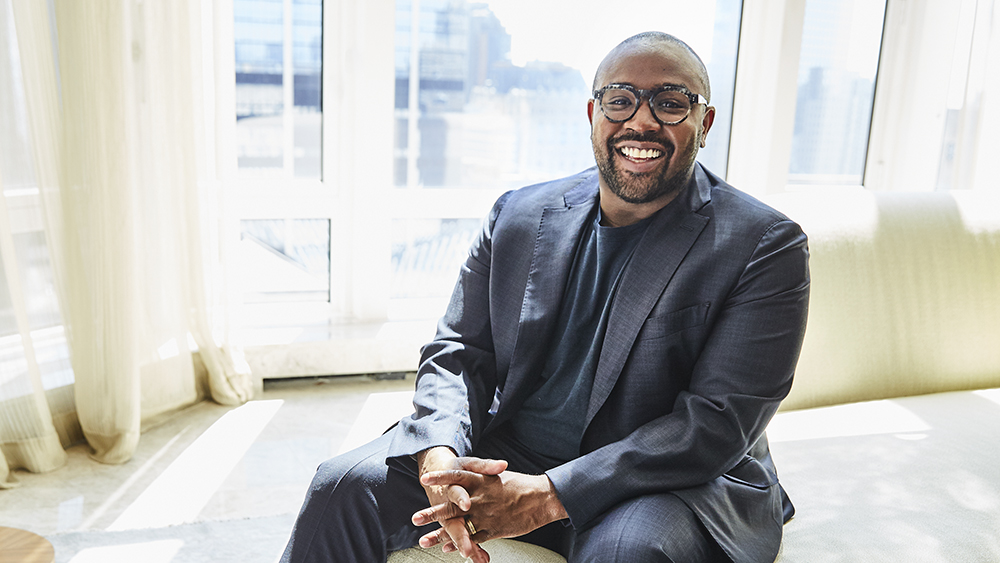 Brett Johnson’s sybaritic streak emerged early on in life. When the fashion designer was just seven years old, he cut his teeth customizing his impressive collection of Nike sneakers. These were no standard add-ons; he’d comb New York’s Garment District with his dad, sourcing top-notch leathers and liaising with cobblers to realize his vision. Since 2014, he has taken that practice to the big leagues, criss-crossing Italy to cherry-pick tanneries, mills and workshops to produce his eponymous collection. He now divides his time between New York and his Milan HQ.

Johnson has a reverence for the nuts and bolts of luxury—the process as much as the product. He put in time at a Ferrari dealership to get an inside look at the methods behind some of the world’s finest supercars, an education that continues to inform his designs. Having launched his brand at the tender age of 24, Johnson has increased his range to include everything from softly tailored suits to cashmere loungewear and, of course, some killer sneakers.

I just started cooking. During quarantine, I got the MasterClass app and watched all of Thomas Keller’s classes. I bought all of his books and have been cooking up a storm. My wife thinks I’m crazy—I hold myself to a very high standard and expect perfection—but the end results have been well-received by my family.

I have two: my lobster risotto and a sous vide cod over sofrito with roasted peppers.

A cup of coffee: Starbucks Blonde Roast if I’m in the States or espresso in Italy.

When I board a plane, I always have to touch the outside before I get on.

What do you still do that’s analog?

My watches. I’ve been a collector of Audemars Piguet. I recently sold all of them except my first one I ever bought. I just gave a watch company some concepts that I developed for them, and hopefully those come to fruition as I want to wear my own designs.

Two things: our cashmere hoodies and a sneaker we do in this cashmere suede. It’s a hand-finished suede that’s ultra-comfortable and really conforms to your foot.

At Da Vittorio, outside Bergamo, they do this cardamom mixed with… I don’t know what else, but it’s non-alcoholic, and I absolutely love it.

What do you crave at the end of the day?

An Opus X Lost City cigar. I don’t drink, so that’s my one vice.

Video games and my cigars.

Business of Fashion and actually—I’m not blowing smoke—I look at Robb Report quite often.

My therapist that I speak to once a week. There are a lot of stereotypes about therapy, but personally, I think it’s a really healthy outlet. A lot of people just bottle stuff up, so for me it’s imperative to talk about what’s transpiring in your life and how you feel.

I have been a Ferrari fan all my life, but I just bought the Mercedes-AMG GT 63 S because I’m trying to be a responsible dad. It’s my new pride and joy: With four doors, we can put the car seat in the back, I still have my sport seats and it’s 0 to 60 in three seconds.

I try to train at least five times a week—an hour on the elliptical and at least 100 to 120 push-ups. We’re getting there…

In a somewhat weird fashion. I have four pillows—one in front, one in back and two to sleep on.

I always wanted to be a pilot, and unfortunately, when I was playing sports, I got hit in the eye and damaged my retina and optical nerve. To be a pilot, you need 20/20 vision in both eyes. Instead, I’m trying to learn how to fly using a flight simulator.

My honeymoon, two years ago. We went to the Seychelles and stayed at the Maia resort. It was magical.

Hôtel de Paris in Monte Carlo. I love Monaco, and almost every time we’re over in Milan, we’ll shoot off there for the weekend.

Richard Branson, because he looks like he’s having the time of his life. He just seems happy doing what he loves and the money is simply a by-product of that.

Always double down on yourself. I was just telling a friend who’d asked for business advice: Always bet on yourself. Nobody’s going to do it better.

And the last piece of advice you were given?

Get your profits up and your costs low.

I try to respond to everybody, certainly within the day but hopefully within a few hours. My wife doesn’t like it too much at night…

My passport and my Bose headphones. The last time my wife told me to leave my passport in the safe, I left it there and missed my flight.

I do. That’s actually my wife’s favorite thing. We both make a point of writing each other love letters, on special occasions or just out of the blue. One of the first dates we had, she said, “I’m not that materialistic. Just write me a love letter.” I knew then she was the woman I wanted to marry.

Unsolved Mysteries—it’s good but it’s also frustrating for me. I like things solved.