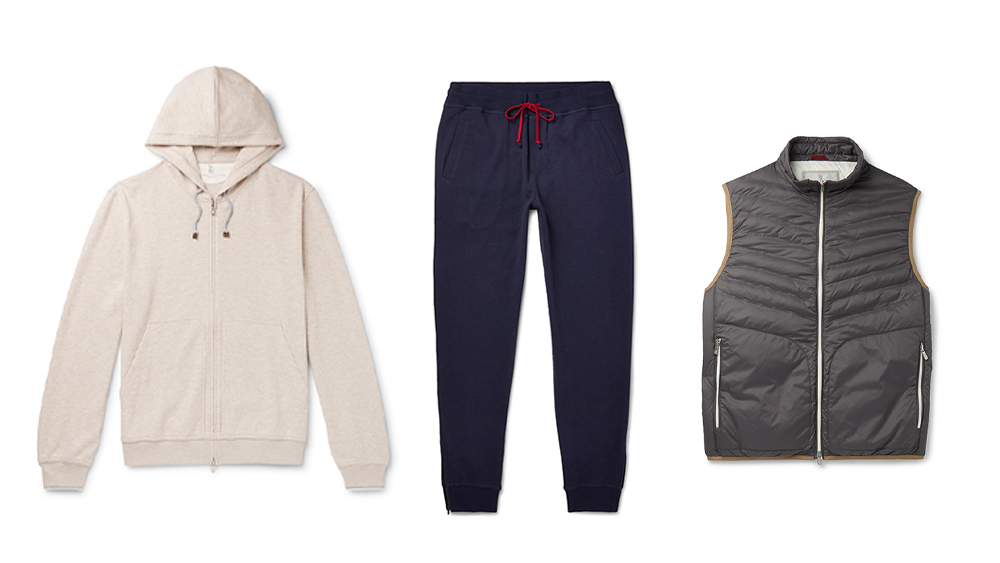 When one thinks of Brunello Cucinelli, a whirlwind of cashmere in shades of dove gray, perfectly slouchy suede jackets sans lining and tales of a utopian workplace usually spring to mind. A kind of easy, patrician style that’s miraculously just as good for lounging around the house as it is for tackling a business meeting. But sports? Not so much. Cucinelli is about to change that with a new collection launching on Mr. Porter.

Comprised of 27 pieces given that soft Cucinelli touch, Gymnasium is the designer’s uniquely luxurious spin on classic pieces of athletic attire. His signature blazers were given a crimson lining that gives a visual jolt to the otherwise neutral, conservative style. Mélange joggers and tees create the ideal weekend uniform that can be dressed up in an instant with the addition of a striped cashmere cardigan or coordinating sweater. A cap in Cucinelli’s favored muted palette makes for a nice finishing touch.

Gymnasium is a subtle but important departure for the Cucinelli label. It is built on a foundation of louche separates that can become a uniform of sorts for those who patronize it, but even a brand peddling in classics needs to hit the refresh button from time to time. Though it is hardly hurting when it comes to the financial end of things.

Last year, the company continued its strong growth trend, which has seen its sales and core profit consistently increase over the prior six years and its shares rise more than fivefold since April of 2012, according to Reuters. Last year also saw the company reach a record €533 million in total revenue, a figure which has encouraged Cucinelli to aim for €1 billion in revenue in the next 10 years.

Head over to Mr. Porter’s website to check out the brand’s sportier take on its elegant standards.