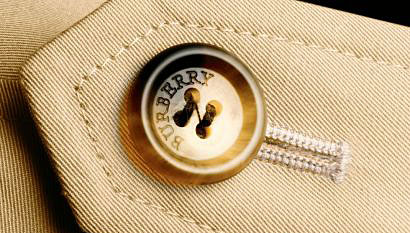 No man’s wardrobe is complete without essentials such as a navy blazer, khaki pants, a tailored suit, and the classic trench coat. Seasonally adaptable and appropriate for any number of occasions, the trench coat is a staple that remains distinctly modern. One can hardly conjure the idea of a trench without calling to mind Burberry, the London fashion house and creator of the original trench, which was originally designed for British officers to combat the rain and carry canteens.

More than 150 years after Thomas Burberry, a 21-year-old draper’s apprentice, opened a small outfitters shop in Basingstoke, Hampshire, England, his waterproof, breathable, and tear-proof design has undergone minimal changes and remains a leader in both style and function.

Burberry’s storied history gained notoriety in 1914 when he created lightweight tightly woven cotton gabardine raincoats for British military officers that protected them from the persistent drizzle. The metal “D” rings on the belt were added to attach a satchel holding grenades, maps, and flasks, and the small epaulettes secured binoculars and a gas mask. Burberry also ventured into more extreme conditions when he supplied the coats for polar explorers Roald Amundsen, the first man to reach the South Pole in 1911, and Sir Ernest Shackleton, who led a voyage across Antarctica in 1914. Shackelton even testified that the lightweight cotton gabardine material saved one of his fellow explorers, who had been left in the cold for days without shelter.

In 1920, Burberry unveiled its signature white-, black tightly woven cotton gabardine-, camel-, and red- checked lining, and nearly a century later it remains a stylish status symbol of a true original. But it wasn’t until actor Humphrey Bogart wore the Burberry trench in the 1942 film Casablanca that it was became a classic piece for every men’s wardrobe. It was nearly 20 years later when Audrey Hepburn made the trench coat a must-have for women when the style icon wore the Burberry trench in the 1961’s Breakfast at Tiffany’s.

The Burberry plaid, now one of the most recognizable fashion trademarks printed on everything from scarves to bags to shoes, has been turned inside out and featured as the exterior print on both men’s and women’s trench coats. Every coat from the house features the same lining, and is instantly recognizable from the inside out.

Today the trench coat remains the starting point and springboard for all Burberry men’s and women’s collections, changing seasonally to reflect subtle style details, but maintaining the classic shape and function of the original model. For autumn/winter 2009, Burberry’s creative director Christopher Bailey says that he looked to “modern nostalgia-referencing the evocative images of Bill Brandt’s England,” for the line, explaining that “the collection is calm, earnest, and poetic.”

Sleek, chic, and modern, the Burberry trench is undergoing a transformation making it a staple not only for rainy days, but also for elegant evenings and relaxed afternoons Silhouettes are oversized and tapered, and the trench is reimagined in lightweight “pack-away,” washed leather and double-breasted wool styles for both men and women. New women’s styles include a metallic double-breasted look and a tiered-hem trench. Runway looks paired these trenches with billowy skirts and ruched lace bandeau dresses, giving the soft, feminine looks a masculine edge.

Burberry’s position in high fashion is sealed with its timeless trench coat. A staple of every man and woman’s wardrobe, the trench has remained a legendary icon of the London house, while consistently reinventing itself as a fresh piece every generation yearns to own. (www.burberry.com)