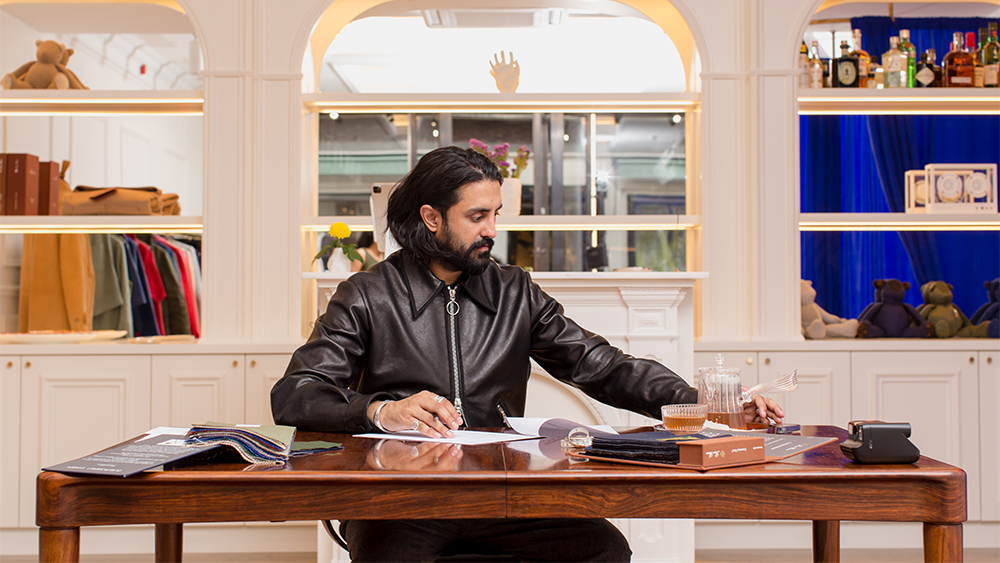 Since 2012, Rav Matharu’s brand Clothsurgeon has been making bespoke garments with a difference: More often than not, he’s cutting tracksuits not business suits. Unlike most practitioners of the tailoring arts, Clothsurgeon is distinguished by a sense of playfulness: one recent capsule collection reworked Burberry scarves into patchwork coats and vests, while another rendered track pants in Loro Piana cashmere while refashioning Nike sweatpants into a three-quarter length coat. Combining such fun, intelligent designs with the one-off luxury of traditional bespoke, the brand has won fans from Nas and Kendrick Lamar to Kevin Hart and collaborated with names from Absolut to Harrods. Now, this tailoring maverick has landed at the practice’s mecca: Savile Row.

Matharu’s arrival at the Row isn’t about upturning the cutting tables so much as reimagining what’s possible at the home of British bespoke. “We give a person the ability to come in and create…there’s no limitation,” Matharu tells Robb Report, discussing how Clothsurgeon upholds the basic tenets of custom suiting.

“We do more casual wear but we’re able to do tailored styles. We discuss fabric, design, measurement and fitting, whether it’s oversized or form fitted. I want people to come in and chat, I don’t want it to be intimidating. We have streetwear-focused followers but also a 65-year-old customer who wants bomber jackets. It’s all exclusive, but it’s for everyone.”

Matharu was born in the Northern English town of Leeds and was a gifted soccer player in his youth, going pro by 17. His soccer years imbued him with a love of cleats verging on obsession, and when he left professional sports a few years later, he chose to study art and design. Working both in retail and on design teams, Matharu transformed that love of sneakers into a dual appreciation of both classic menswear and the hype of marquee fashion brands. “At Clothsurgeon we understand both worlds, it’s high craft, looking at cloths and patterns, but then I’ve been obsessed with sportswear and designer brands, how they work—very different thought processes.”

The contrast between high fashion and tailoring is sometimes seen as antagonistic: One moves lightning fast, sometimes wastefully, the other’s love of tradition can make it seem stuck in the past. Matharu presents his work modestly, but he’s performing the work of a master translator, taking the wit and freshness of sportswear into the precise language of British tailoring, while offering a salve to the endless drops and clout-chasing that have come to define streetwear.

“The amount of collabs in the sneaker world means it’s about what’s next, about reselling products: You get excited about a release and then a week later there’s another,” Matharu says. The artificial scarcity of streetwear drops might simulate the one-of-a-kind nature of bespoke, but it’s a poor approximation. “If you can go into a store and buy a jacket from a production line for 10k, it’s not true luxury. It can be an expensive product that’s still fast fashion.”

It’s making, not branding, that sets Clothsurgeon apart. Like traditional bespoke, all of Clothsurgeon’s custom pieces are designed from the ground up and entirely produced at its atelier in east London. Clients have up to 25 measurements taken, from which Matharu creates a pattern—bespoke clients can even opt to have a basted fitting. For this service, a jacket starts at around $1,500 and takes four-to-six weeks to produce. And while bespoke is Clothsurgeon’s pride, the brand also offers a limited range of ready-to-wear, available on Mr Porter.

The brand’s Reconstructed line has transformed Supreme blankets into overcoats and bags into utility vests. It’s made strangely familiar yet unique Nike tees from the brand’s own sweatpants. In a collaboration with Coca-Cola, the soda titan sent branded nylon umbrellas from its archive in Atlanta to Clothsurgeon’s East London workshop to be remade into a collared bomber jacket, overcoat and sweatpants. This is recycling as high art.

As the tenth anniversary of the brand approaches, Matharu is in a reflective mood. “Now is the end of the beginning. Someone once told me it takes ten years to build a good, authentic brand.” He’s setting his sights on a more ambitious project at his new retail home. The store itself, with white walls and simple furnishing, looks as much like a gallery as a shop. His ambition is to make it a “window of opportunity” for emerging designers making their own garments, jewelry and even furniture. “We could be the platform for these young artists. It’s really important because I feel grateful for the space on Savile Row.” Above all, the aim remains to bring a bespoke sensibility to every corner of contemporary design. “We want our pieces to be almost like heirlooms. True luxury is having something made completely for you. Something you’ll really value and have forever.”