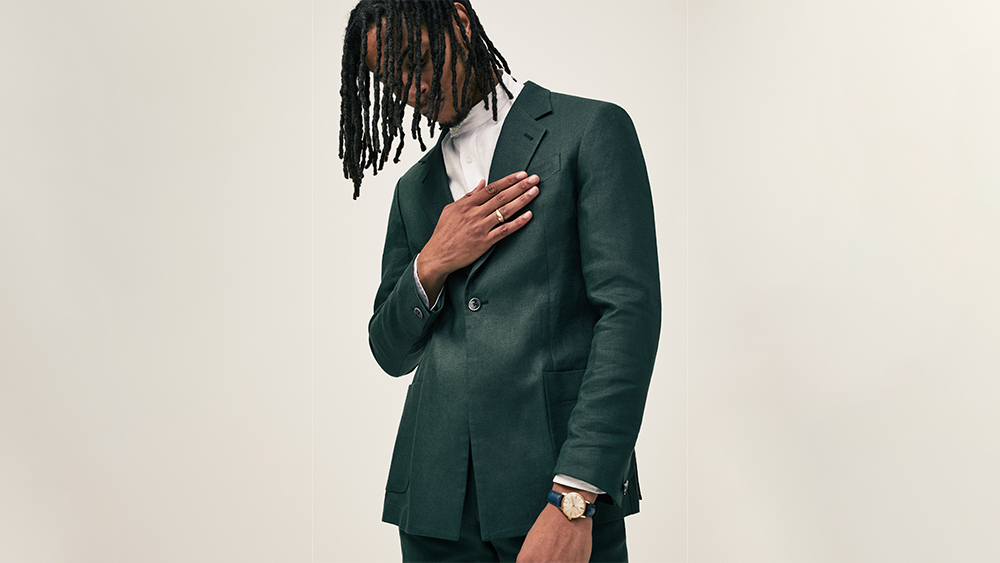 Recently launched British brand Coconut Residence celebrates the cosmopolitan energy of London, but not in the stereotypical suited-and-booted sense. Tailoring is on the menu, but this is London in all its contemporary diversity, drawing influences from Europe, Africa, South Asia and the Caribbean. That colorful, multicultural lens is largely a reflection of the brand’s founder, Veeraj Haria-Shah.

Haria-Shah grew up in Britain with a wide range of cultural connections. His grandfather was a farmer in Gujarat, India, who took his family and his fruit and vegetable business to Kenya, where he exported to Britain before eventually settling in London. Haria-Shah’s formal education was equally diverse: He studied at London College of Fashion, going on to stints at British retail behemoth Marks and Spencer, on Savile Row and with iconic British designer Paul Smith. But he also worked in the family business, following his grandfather’s footsteps around Africa and Latin America. “I was like the man from Del Monte,” Haria-Shah jokes, recalling stepping off the plane in one country after the next, decked out in the spoils of his London tailoring career.

When Haria-Shah decided to start his own line with Alexandra Taylor Richards, a fellow Paul Smith alum, the pair had a clear vision. “We wanted a brand that would represent young creative people in London,” he explains, stressing a commitment to both provenance and craft. Coconut Residence made its debut in October of last year. Alongside the Anglo tailoring and Scottish woolens that you’d expect from a British luxury operation, they look cues from across the globe.

Their first collection of shirts features a Nehru collar that references the first Prime Minister of India, while their colors nod to Indian cricket teams. A run of t-shirts designed in collaboration with reggae photographer Beth Lesser celebrate icons of Jamaican dancehall music. Coconut Residence’s bags, Haria-Shah tells us, play on the colors of mangoes he inspected for the family business.

The brand’s colorful market bags ($64) are made in Rajasthan of recycled nylon.  Coconut Residence

One might think that such a breadth of influences would get muddied, but the brand is tightly curated. The collection is arranged around a house suit and shirt, with a range of softer, casual items and accessories to complement. What initially stands out is Coconut Residence’ skillful use of color, from the bright lychee red of a Shetland sweater to the intense, mineral crispness of a green linen jacket. The silhouettes more subtly meld the best of East and West: the house shirt combines a flattering cut (high armhole, generous chest, austere Nehru collar) with first rate fabrics (the dense cotton flannel feels earthy but cashmere soft).

The house suit is sharp without being loud: a one-button jacket with broad, fish-mouth lapels and a straight, angular front, paired with lean, gently tapered flat-front trousers. The strong lines and intense colors make for a suit that’s flattering to wear and vibrant to see. You can sense the influence of Paul Smith here, but also the Savile Row legacies of Ozwald Boateng and Richard Anderson. There’s also a model offered for women, with the same rich materials and silhouettes cut to a different frame, as well as a whole range of genderless pieces.

The ‘Pondicherry’ linen shirt ($170) for him and her.  Coconut Residence

This is not a tribute to one place or tradition in particular, but to the complexity created by the movement of people and ideas. From Anglo-Indian shirts to streetwear-influenced sweatshirts (featuring a cheeky box logo with Sanskrit text), what comes through in every piece is the founders’ personal heritage.

Less than a year into launching his brand, Haria-Shah is looking towards a summer where—as we all hope—weddings and other gatherings will return in earnest, hinting that the brand’s signature suit might be available in more colors and cloths. But for now, he’s working on a luxurious piece of loungewear in a venerable Anglo-Indian cloth that became beloved from London to Louisville: seersucker pajamas.