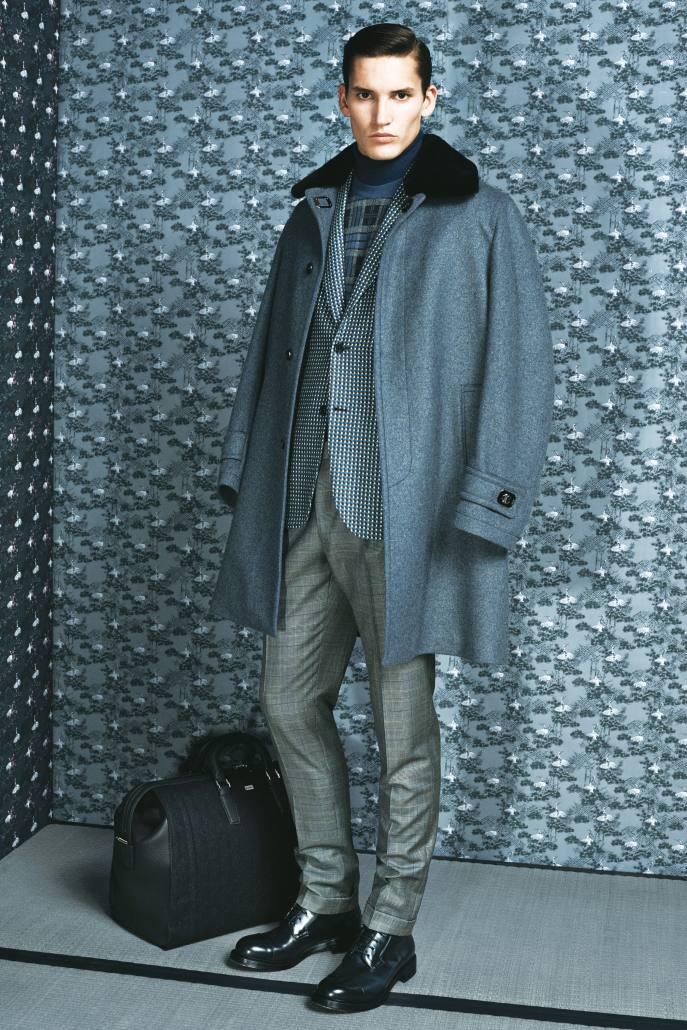 The  recent discovery of a five-decades-old journal in Brioni’s archives in Italy prompted a visit to Japan that in turn has influenced designs in the brand’s fall menswear collection. The collection includes suit jackets that are cut like kimonos—with belted waists and inset lapels—and silk suits and shirts printed with images of cranes, bamboo, plum blossoms, and cherry blossoms.

The collection shows how well Italian tailoring techniques and traditions blend with Japanese aesthetics in menswear designs. “You can see a mix of cultures in the pieces,” says Brioni creative director Brendan Mullane. “There is something Japanese about it, yet these are still sartorial suits. It is the coming together of two very traditional worlds.”

Mullane notes that men are increasingly seeking individuality and authenticity in their clothing, and he says this collection offers both. “Men want unique designs, and they are interested in how things are made, the legitimacy behind it,” he says.

Brioni’s founders, the master tailor Nazareno Fonticoli and his business partner Gaetano Savini, traveled to Japan in 1963 to present their menswear to the top clients of the Tokyo-based department store Mitsukoshi. Last year, while researching Brioni’s vast archives at the company’s headquarters in Rome, Mullane discovered a journal in which Fonticoli and Savini documented the trip to Japan, with comments about their findings and ink drawings of the people they encountered and the patterns they saw. “It was like a sign to pursue the Japanese story,” says Mullane, who organized a trip to Japan for his team shortly after finding the journal.

While in the country, Mullane and his colleagues visited a company that has been making kimonos for about 500 years. The visit resulted in a collaboration that yielded the kimono-style suit jackets (some of which are made from black cashmere and grosgrain satin) and the prints for Brioni’s silk shirts and other garments. The pieces are made—mostly by hand—in Brioni’s workshop in Penne, Italy. The kimono maker is also credited with the hand-painted artwork featured on a very limited series of bomber jackets. Brioni is offering fewer than 30 of the jackets, each priced at $39,075.

The more Mullane explored Japan and its history and culture, the more captivated he became, and the more determined he was to create a new aesthetic that connects the country’s rich traditions to men’s tailored clothing. “There is a total respect for nature and tradition in Japan,” he says, “and it can sit side by side with contemporary culture; it doesn’t contrast. And that is what I love about the Japanese aesthetic.”