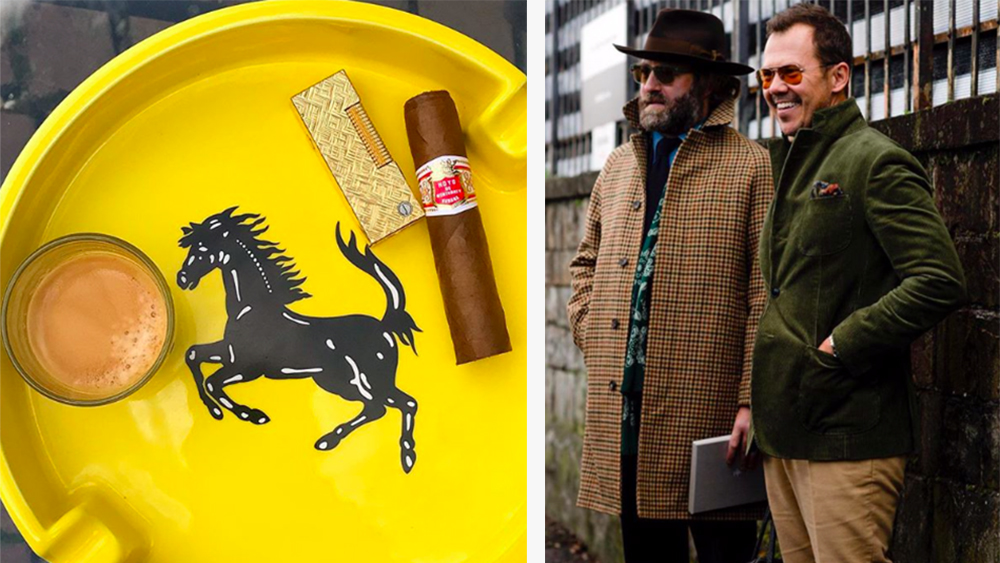 The best-dressed men appreciate clothes with character and a good story. And in the wee hours of the morning, many of them can be found doing the same thing: scouring eBay and Etsy. Sometimes it’s with a purpose, and sometimes not—that’s part of the fun. The boxes that mysteriously surface days or weeks later, depending on how far-flung the search terms went (often to Japan), arrive with a sweet sense of victory that new clothes rarely have. That safari jacket from the 1970s looks better than what you’ve seen lately because, in many ways, it is. These guys know that. They also know how to track these pieces down and make them look modern, which is the art of wearing anything vintage well.

Boxes with handwritten labels from Kansas to England show up at my house regularly, filled with what seems like the entire archive from Ralph Lauren’s Polo Country: plaid button-downs, cashmere sweaters, boat shoes—you name it. Exceptionally broken-in L.L. Bean totes are sometimes overshadowed by a summer-weight linen-canvas jacket or five. For my boyfriend, David Coggins, the author of Men & Style, these eBay wins represent a designer’s golden era at a brand or a season of madras that hasn’t surfaced in decades. In other words, they’re rare. The patina of pieces like this, that well-worn tote, for example, imparts a knowing ease to any outfit, from a bespoke suit to an Oxford shirt and chinos.

eBay and Etsy make it easy to find incredible brands and collections that no longer exist, and clothes of a quality that even today’s most expensive labels don’t adhere to. It may be surprising that the best vintage Gucci loafers are on Etsy, but thank me later. Scrolling and searching, you’ll find yourself tapping into your creativity—a feeling that’s often lost when shopping these days—and uncovering more unusual pieces than you will on, say, Mr Porter.

“I could be watching Jaws and looking at the jungle jacket that Robert Shaw wears and think, man, I NEED that. And that will spark a hunt,” says Abercrombie & Fitch SVP of men’s and women’s design Aaron Levine, whose encyclopedic knowledge of both vintage and contemporary styles has made him a creative figurehead in menswear. “I love hunting down beautifully-made things and giving them a home: Savile Row tailored clothing, old Hermès sterling silver bits and bobs, bench-made shoes people bought and never wore, old 80s Swatch watches, Carhartt bibs…the list goes on. It’s about the high and low mix for me; I find a lot of joy in putting it all together.”

This is clothing that has little to do with price or popularity. Once you’ve tossed on a Kamakura shirt and thought: “Those sandals I despised on my dad as a kid would look phenomenal with this,” then you’re well on your eBay way. That, and men’s growing interest to define their personal style, is why websites from The Armoury’s Drop 93 to Grailed have honed in on the re-sale market. But eBay, free from hyper-curation, allows for a more individual feeling of discovery.

When it comes to wearing your new finds, execution is critical. Styling the old with the new, naturally, makes all the difference. Photographer James Harvey-Kelly has managed to turn his into a daily uniform that’s both utilitarian and highly chic. “It’s a little niche, but the main thing I buy on eBay is early 90s Banana Republic reporter vests and early 80s Orvis fly fishing vests. They’re rare, and the pockets are ideal for travel,” he says. “The modern iterations look too technical and a bit Desert Storm.”

Whether he’s creating campaigns for brands like Drake’s and Ralph Lauren or merely having a drink, James cites his eBay scores as his most frequently worn item of clothing. “I love the rugged utility feeling of them against more refined pieces—in winter over a cashmere roll-neck with higher rise, clean denim and good slippers, and in the summer with Levi’s 501’s, a t-shirt, an old Oxford and a Stetson hat.” For a dash of amusement, he also collects defunct camera brand merchandise—think Pentax windbreakers and Mamiya bucket hats too irresistible to pass up.

Search terms speak volumes and according to Antonio Ciongoli’s browser history, he’s very into nature and Japan. The founder and designer of 18 East looks far and wide: “Lately I’ve been using eBay, Etsy and Depop to track down vintage outdoor gear from brands like Atmosphere Mountainworks and Camp 7,” he says, adding that frequent hikes have recently had him “focused on trail shoes: AGC models from the ‘90s like the Pyroclast and Rongbuk.” Antonio’s searches also go East: “I was addicted to Rakuten Global and ZenMarket [a proxy service that lets one shop online auction sites in Japan]. My favorite brand in the world is 45 RPM and, while their pieces are deservedly expensive at retail, a good amount is floating around secondhand.”

For some, like Sid Mashburn, eBay and Etsy also provide an opportunity to offload the scores. “I have a pretty good collection of old clothes at this point,” he says. “For me, the search is almost more fun than the find.” As the founder of one of the best men’s shops in the US, Sid’s tailored-yet-rugged-preppy aesthetic is as cultivated as his manners. Decades of hunting for old clothes has undoubtedly influenced his ability to create new ones with a worn-in, laid-back cool. “When I was growing up, most of my clothes came from thrifting, including the first tux that I bought in high school. Now, I’m mostly searching for records.”

With 25 million eBay sellers globally, the hunt can feel endless. Matt Hranek, the photographer and founder of WM Brown Magazine, is one of the foremost experts on tracking down stylish pieces with a past. He surfaces from Les Puces in Paris or a barn in upstate New York with a mint-condition Cartier lighter without flinching. His prized eBay wins are varied: “Campari ashtrays, vintage Dunhill lighters, cocktail shakers, Baccarat and piles of madras shirts and shorts,” he says. “I’m a generalist, but things I’m always on the lookout for include Barbour jackets, vintage Fila and cocktail gear.”

If you’ve yet to venture into the internet’s secondhand sartorial territory, start by thinking about pieces you’re attracted to. It may be trousers from a film, Hunter S. Thompson’s bucket hat, a vintage Hermès scarf—you can start broad and hone in. These pieces have to live somewhere, after all, and they’re better off with you. In the wise words of Levine: “Be true to yourself and your style and look at what you’re buying,” he advises. “Know your measurements and how you like pieces to fit. And be patient!” With some watch-list practice, many hits and a few misses, you’ll find that hunting for vintage online caters to a newfound sense of personal style—one that’s marked by a good patina, and the confidence that comes along with it. And, it’s open 24 hours a day.