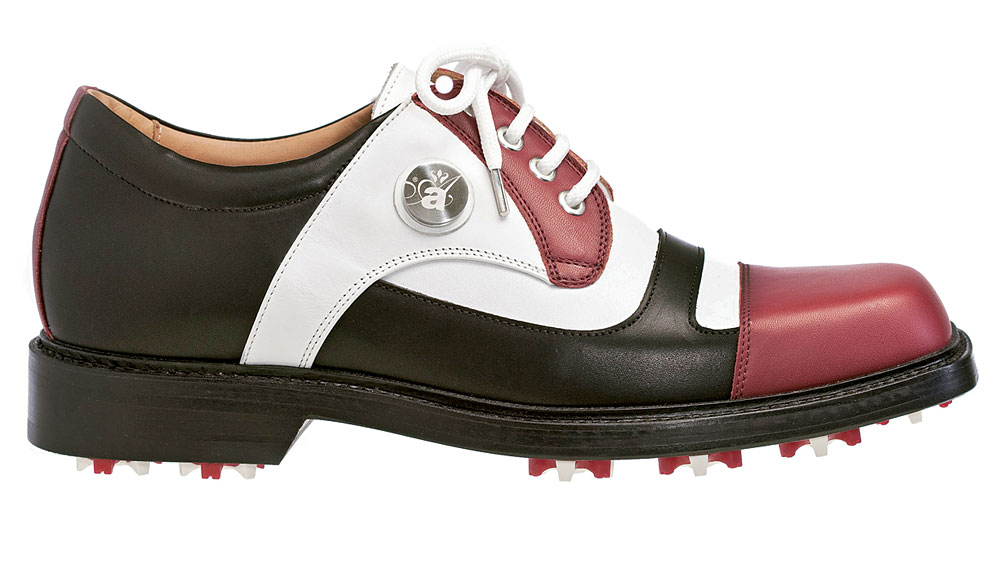 The path that led Alex Bartholomew to a career designing and producing high-end, handcrafted golf shoes was not preconceived, by any stretch. Born to British parents and raised in golf-rich South Africa—a country currently home to more than 350 professional golfers on both U.S. and European tours—Bartholomew no doubt benefited from regular exposure to the game; she even logged a modest number of rounds herself, before focusing on footwear for the links. Her specific focus developed after she crafted a pair of shoes while she was a student at the London College of Fashion. When many of her friends commented that her shoes were “golf-like,” Bartholomew decided to explore the fashion opportunities that existed within the game. She began investigating her potential competition while working for footwear heavyweights the likes of L.K. Bennett, Aspinal of London, and Burberry, and after four years, her portfolio was several golf samples strong. “All the time, I tinkered away in the background to find suppliers and to learn everything about the technical side of golf shoe production,” she says.

When Bartholomew was ready to go out on her own, she launched Royal Albartross (www.albartross.com) in the U.K. and established the company’s factory in Montegranaro, Italy. She named her company as a playful take on an albatross, golf’s term for a three-under-par score on an individual hole, but Bartholomew was serious in her selection of the company’s factory location, knowing it was at the heart of Italy’s shoemaking region. “There are only small pockets left in the world where people have these kinds of skills,” she says. While her craftsmen all possess generations of shoemaking skill in their lineage, Bartholomew has not limited her brand’s scope to the eastern shores of Italy. Royal Albartross sources the finest materials from around the world—Italian leathers, German steel, Japanese laces, and American cleats.

When golfers lace up a pair Bartholomew’s shoes, they’re wearing the culmination of more than 250 hand-performed steps that required, on average, 70 hours to complete. “It’s the extra care and time in the process that makes the difference,” she says. “When you open a box of our shoes, smell the beautiful leather, and see those hours of work, you know what I mean.”

Bartholomew still squeezes in a round of golf here and there, though admits that her skills on the course don’t compare to her skills as a designer. Still, she recognizes that to make footwear that golfers love, the shoes need to be more than a fashion statement; they need to be exceptionally functional. “If you understand the game, how the foot moves and flexes in performance during a swing or walking long distances, you have a clear idea of what is expected from a golf shoe,” Bartholomew explains. She also knows that most golf shoes more or less look the same, which is why she’s made it a point to break boundaries with color combinations and patterns. “Our shoes are designed with golfers in mind,” she says, “golfers who want something a little bit different.”

When Royal Albartross debuted in the U.S. in January, Bartholomew also introduced a new women’s line. At £355 (about $570) for any one of six men’s styles and close to £335 (about $540) for any of the six women’s designs, a pair of Royal Albartross golf shoes will cost you more than most, but then, these aren’t like most golf shoes. “You can’t get [shoes like] this from a thousands-of-pairs-a-day production line,” Bartholomew says. “The Albartross experience is pleasurable from purchase to play.”