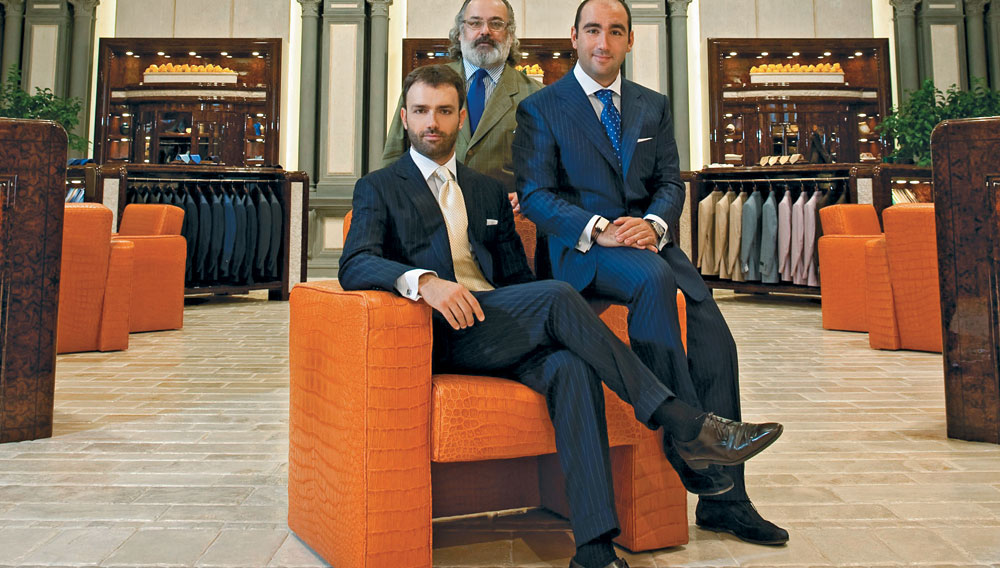 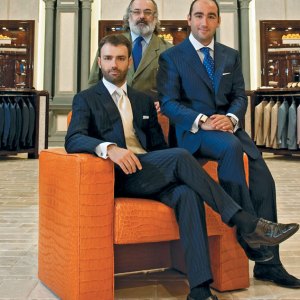 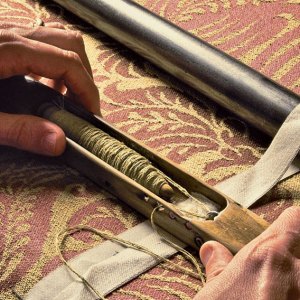 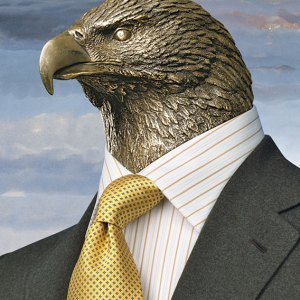 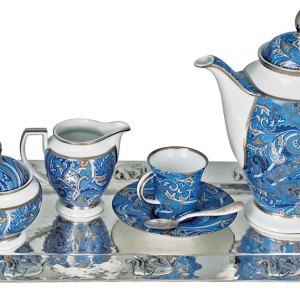 Passing through the massive wrought-iron gates of Antico Setificio Fiorentino—the ancient silk mill located in the Oltrarno district of Florence, Italy—is like stepping back centuries. Beyond the entrance, a tree-lined walkway leads to a wooden building in which a series of antique handlooms busily fashion exquisite silks and brocades using patterns that date to the Renaissance, when the Medicis were at the height of their power. Subtle, earthy scents of raw silk and old wood fill the air, while the looms rhythmically turn out fabrics that shimmer as if dappled with sunlight.

Founded centuries ago by several noble families, this Florentine treasure was long owned by the Pucci family, which preserved the city’s oldest silk-weaving facility by retaining a handful of craftspeople. In 2010, however, when the family finally put the mill up for sale, another owner and patron assumed the responsibility of protecting this fragment of Florentine heritage: luxury-goods designer Stefano Ricci. “It will never turn a profit,” says Ricci, who founded his business in the Tuscan capital 40 years ago. “But I want to keep Antico Setificio in my family forever. Antico Setificio is part of the culture of the city. We didn’t just produce great painters; we were also known for great textile art.”

Ricci’s passions for art, craftsmanship, and all things Florentine have catapulted his business, which began as a local tie factory, into an international luxury-goods house with boutiques in Paris, New York, Singapore, Shanghai, Moscow, and other cities. Paneled in walnut, paved with travertine, and furnished with crocodile-covered chairs and couches, his retail interiors are testaments to his belief that beauty and fine workmanship are better measures of success than a bulging bottom line. This philosophy continues to inform Ricci’s family business, even during this period of dynamic change. In addition to buying the historic silk mill, the company has moved its headquarters from the building where it was founded (as it happens, the home of Ricci’s mother) to modern glass offices in the hills outside of Florence. Moreover, sons Filippo, 28, and Niccolo, 34, are currently expanding the business from a luxury menswear firm into a full-spectrum lifestyle brand that will offer housewares and furnishings—though all of the company’s goods will continue to be made in Italy, mostly in Florence. Last year, the Stefano Ricci label was a $58 million business, according to Niccolo, who is co–chief executive officer with his mother, Claudia. (Filippo is creative director.)

“The strength of our family stems from how close we are with each other,” Niccolo says. Though their business interests cross continents, the Riccis still dine together most nights and vacation together annually in Africa. For 30 years, these safaris have furnished Stefano with time to hunt and relax—and with inspiration. On these excursions, he sits with a sketchpad and designs an entire season’s line—accessories made from exotic skins, and knitwear and silks in the rich palette of these natural surroundings. “We don’t have e-mail or phones,” says Niccolo, recalling last summer’s three weeks in Tanzania, “so it is time to share ideas, reflect, and relax without distractions.”

After returning from last year’s trip, the Riccis moved into their new headquarters outside of the city, where some 100 artisans make leather goods, shirts, ties, jeweled cuff links, and belt buckles, as well as the new flatware. Enormous piles of ultrathin crocodile skins await the careful attention of experts, who will cut them by hand to make shirts, jackets, accessories, and shoes. On an upper floor, Stefano’s expansive glass office overlooks the green hills on one side and, on the other, an indoor display of vintage cars that includes his prized 1933 Aston Martin Le Mans and nearly a dozen other examples. Here, Ricci oversees every phase in the design and production of his men’s fashion lines.

No detail escapes his attention. One day last fall, while preparing for his first major men’s fashion show in Moscow, Ricci personally styled every single outfit. As the models lined up for his approval, the designer reconsidered the silk print shirts, grabbing a bolt of black silk, cutting a piece of material, and pinning it to one shirt collar. Satisfied with the new look, he ordered all of the silk shirts to be returned to the tailors for black contrasting collars. The show itself, in typical Ricci fashion, spared no expense; it required a team of 62 people, including 32 models, six tailors, and the owners of Ricci’s favorite restaurant in Florence, Osteria delle Tre Panche, who prepared pasta with truffles for his guests. The Russians, for their part, were delighted to note that, with his bushy beard and spectacles, the 62-year-old Italian bears a strong resemblance to Karl Marx.

This passion for perfection is a family trait. After accommodating requests from clients for custom wares to outfit yachts and apartments, Filippo developed the home-decor business, which offers porcelain, silver, and crystal. Sharing his father’s penchant for sumptuous materials and Italian craftsmanship, he researched traditional techniques and sought out the most skilled Florentine artisans, whom he now employs to inlay china with gold and platinum and to engrave crystal stemware. The company’s archives serve as a font of ideas for his new designs. “I will transmit a tie pattern into the trim on a plate,” he says, referring to elegant new china decorated with gilt paisley edges. “It takes four hours to engrave a single crystal glass—and three hours to hand-finish the handle on a single piece of cutlery to create the matte finish.”

The acquisition of Antico Setificio enhances both divisions of the family business: The Riccis now use the exceptional brocades the mill weaves as trim for home furnishings and for some of the brand’s knitwear and clothing. Yet the venerable establishment’s storied past and association with the famous guilds of Florence are assets the family treasures every bit as much as its textiles.

Founded by several Florentine noble families who decided to combine their proprietary patterns and looms into a single workshop, Antico Setificio has operated in its current location since 1786, when its proprietors acquired the building where its ancient looms—including a warping machine based on a design by Leonardo da Vinci—still manufacture some of the same fabrics represented in Renaissance paintings and frescoes. The majestic taffeta depicted in Domenico Ghirlandaio’s fresco on the walls of the church of Santa Maria Novella (1485–1490), for instance, is fine ermisino—a textile now made at Antico Setificio—and the gowns adorning figures in several Botticellis hanging in the Uffizi Gallery are made of vibrant red, gold, and azure silks from the same looms.

The production process has changed little since that time. Today, the fabrics begin as raw spun Brazilian silk that is hand-dyed without chemicals and then wound onto spools by the workshop’s 11 skilled artisans, who have each completed or begun an apprenticeship of at least five years. No more than 10,000 meters of material can be produced annually and prices are dear—in some cases, nearly $1,100 per meter. One particularly complex style of brocade requires 48,000 different threads to be assembled on a single loom. Because of their scarcity, these fabrics are used today by a select few interior designers and restorers in palatial homes and palaces, such as the Kremlin in Moscow and the Amalienborg Palace in Copenhagen. Yet Ricci believes that their true value derives from a humble source. “Without the human touch,” he says, “everything will be flat. The artisans bring emotion to the product, and the definition of a true luxury product is something that gives emotion.” 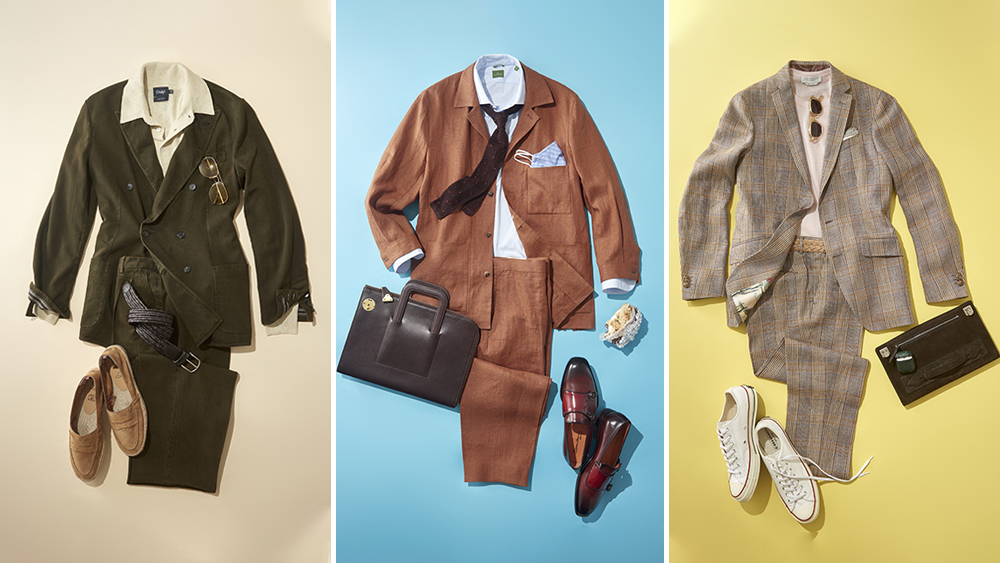