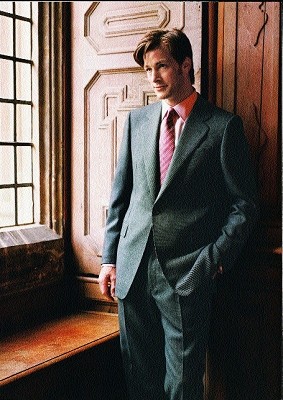 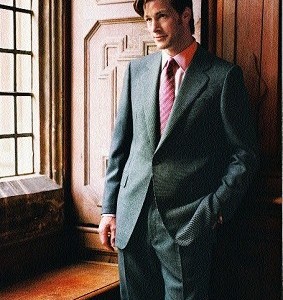 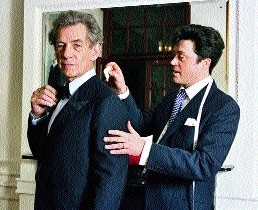 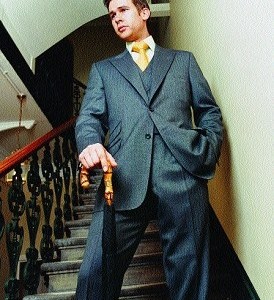 When venerable London bespoke suitmaker H. Huntsman & Sons Ltd. announced earlier this year that it would make cutting-edge tailored clothing for fall bearing the signature of designer Alexander McQueen, it was just the latest indication that Savile Row may be shedding its staid image. Now, the British bad-boy designer, who paraded a little purple riding hood with live wolves in tow down the runway at the presentation of his fall women’s collection, is working with a company known for sharp-shouldered pin-striped suits, the kind worn by Fleet Street bankers for decades. “This is an important move and a direction I have wanted to pursue for a long time,” says McQueen, who spent his formative years as an apprentice to several Savile Row tailors, including royal suitmaker Anderson & Sheppard. “It gives me the opportunity to design true tailored menswear—beautifully cut suits in fine fabrics, made to fit the individual.”

His debut collection of suits, sport coats, and overcoats, priced between $4,200 and $7,000 and soon to be sold through the designer’s ateliers in London and New York, feature McQueen’s signature arctic white silk-satin linings and require five months from fitting to completion. “Basically, McQueen will take the orders, and we will make the clothing in our workshops here in Savile Row,” explains Huntsman sales director Peter Smith. “And when he opens his shops in the States, we will see and fit his bespoke customers there.”

McQueen’s name on a Savile Row label is just one of many signs of the transformation that is taking place at London’s most celebrated sartorial destination. For starters, the pristine 17th-century row houses for which the 400-yard-long street is named now share space with several modern buildings, one of which is occupied by Sir Terence Conran’s tailor-themed restaurant, Sartoria. Furthermore, though the construction scaffolding that blocked the area between Maddox and Vigo streets for years has finally been removed, similar barriers will go up again as early as the spring, when Anderson & Sheppard, a fixture at 30 Savile Row for 96 years, will have its building renovated.

“One could say that Savile Row is taking on a new complexion,” says Brian Lishak, a managing director at Huntsman for more than 45 years before leaving in July 2001. He has formed a new bespoke house with tailor Richard Anderson under the latter’s signature. “There are many more modern stores now housed in lovely old buildings [including a massive Jil Sander shop that opened in March at the corner of Vigo and Savile Row in what used to be the Royal Bank of Scotland]. So it combines the flavor of classic buildings that have always represented the Row with modern interiors that are warm and welcoming compared to the old establishments, which were always kind of clublike.”

The partnership between McQueen and Huntsman reflects the mixing of old and new that is also taking place behind the freshly painted doors of Savile Row. For both parties, the partnership could not have come at a more opportune time. Huntsman’s business has struggled for years, and this season the company learned that its ready-to-wear label, which was introduced in 1983, is being dropped by Barneys New York, the only American store to carry the brand. Smith downplays the move by Barneys, saying Huntsman wanted greater distribution control of its ready-made line, which is made on Savile Row and priced in the $5,000 range, or about a third of the price of the company’s bespoke suits. For McQueen, aligning his name with one of the few remaining bespoke tailors on Savile Row allows him to enter the menswear market and take advantage of the fact that long and lean British-inspired suits are once again emerging as a major trend for fall 2002.

Other established Row tailors haven’t had Huntsman’s good fortune in aligning themselves with a marketable partner. Case in point: Chester Barrie recently lost its license to produce suits for the Ralph Lauren Purple Label collection and went into receivership this summer after its parent com-pany, Luxury Lifestyles, defaulted on its loans. Another Savile Row suitmaker, Kilgour French Stanbury, like many of its peers, has had to compensate for a sales slump related to terrorism, recession, and changing values, by introducing what the company calls “Shanghai bespoke” suits, lower-priced suits that are measured in London but made in China.

The changes taking place on Savile Row may just be an extension of the evolution that began there in the 1960s, when hot young tailors such as Tommy Nutter, who designed for the Beatles, and Michael Fish, who outfitted the Rolling Stones, introduced their outrageous take on traditional bespoke suitmaking. The more recent rumblings began 10 years ago when another set of newcomers—fashion stylists Ozwald Boateng, Richard James, William Hunt, and most recently, Spencer Hart—leased storefronts once occupied by artisan tailors who died or simply could no longer compete with designer labels marketed as bespoke alternatives. “When I started working here, there were probably 40 or 50 bespoke tailors on Savile Row,” says Lishak. “Over the years, most of those have disappeared, and what we’ve got now is perhaps a dozen or so strong tailoring houses.”

For his part, Richard Anderson, who spent 20 years at Huntsman, the last seven as its head cutter and production director, is making a point of being faithful to his custom roots with his new venture: the first true bespoke tailor house to open on Savile Row in 25 years. “Really, that’s the only way I’ve been taught,” he says. “So my garment is similar to what I was making at Huntsman, but with more shape and flair.” Anderson’s silhouette is based on a traditional riding, or hacking, jacket with a high armhole, one-button front, natural shoulders, and fairly high vents in back to accent the waist, but he uses minimal padding to update the style.

While Anderson, who many believe represents the next generation of bespoke suitmakers, has been welcomed by the old guard, most newcomers to the Row have been roundly criticized for discarding time-honored tradition and focusing on modern cuts, lighter fabrics, and an often bold approach to color. “A lot of the younger companies, Ozwald Boateng and Richard James for instance, are trying to capture the bespoke history [of Savile Row], but they are not trained as tailors,” says Martin Nichols, a bespoke tailor who trained with both Huntsman and Jeremy Hackett on Savile Row and now works as a custom tailor in New York. “Instead, they are putting a design spin on it and trying to fake it a bit. They are using the suits as a picture frame, with the picture being the colorful shirt and tie. It seems the new blood is more Austin Powers than Savile Row.”

While Boateng and James might object to such statements, they are the first to admit that they are cut from a different cloth. Boateng’s sharply tailored suits, for instance, come in lively fabrics such as purple velvet and are often lined in brilliant neon colors. James, whose colorful clothing and accessories sell at Neiman Marcus, once described his tailoring as “a caricature of the traditional British look.”

Most of the established players recognize that these designers are bringing a new, younger customer to Savile Row; however, they also see them as a threat to the street’s reputation for bespoke tailoring. “The difference between them and Tommy Nutter in the ’60s is that Tommy Nutter was a tailor and a cutter,” explains Simon Cundey, managing director at Henry Poole & Co., a family business that in 1806 became the first tailor shop on Savile Row. “He knew how to do bespoke work, and these new ones missed out on that stage. They are more about fashion and have no idea how to make a true bespoke fitted suit.”

That notion has created what many managing directors of the established bespoke houses—David Williams at Anderson & Sheppard, Terry Haste at Huntsman, Hugh Holland at Kilgour French Stanbury—consider confusion and a blight on the traditions of bespoke. “Certainly they’ve helped the business and brought new shoppers to the street, but they have also brought with them a lot of rubbish product,” explains Ray Stowers, who has managed the bespoke department for Gieves & Hawkes at 1 Savile Row for 18 years. “A lot of people now are doing made-to-measure, which is basically a very American product, and calling it bespoke because it comes with extra pockets or flashy linings. You try on a ready-made suit, and you can alter the details. Because they’re selling them to footballers and pop stars, they’re charging top price. I wouldn’t say people are being conned, but I don’t think they know the difference any more.”

Cundey, whose company makes 40 percent of its bespoke clothing for American businessmen, adds that many of the suits being sold as bespoke by newer firms on Savile Row are actually inferior fashion products produced in factories outside of London or even out of the country. “Like women’s couture, a true bespoke garment is constructed literally by hand from scratch using the customer’s exact measurements, and is made entirely on the premises, starting with a baste fitting where the customer has the right to choose every single detail,” he says.

Of course, some of the blame for all this confusion has to fall on the bespoke tailors themselves, once a dusty, snobbish set inclined toward repeating the same classic British slim-silhouetted suits, year after year, and selling them out of formal and often forbidding shops. Likewise, many of these tailors have persisted over the years in trading on royal warrants, often allowing the citations from long-departed customers to serve as their calling cards. Notations penned by a range of celebrities from Charles Dickens to the Duke of Windsor and Napoléon to Nehru still hang on walls and fill cavernous basement archives of established shops. In keeping with this resistance to change, Row tailors have never formed a collective to market themselves and their suits as luxury products, allowing promotion-savvy designer brands to steal their thunder and their dollars.

“A Savile Row suit is by its very nature a luxury product, but it has never been marketed that way,” says Nichols. “That’s kind of remiss of Savile Row tailors. When you think about it, there are actually only a few places in the world where a craft is linked to a location: Wall Street and finance, Jermyn Street and shirtmaking. As far as tailoring goes, I don’t think there is any other street in the world where you can make that connection.”

Nevertheless, most of the established players on Savile Row have taken only baby steps in response to changing times. Gieves & Hawkes, a 216-year-old suitmaker, has hired the street’s first woman tailor, an anomaly in a business dominated by elderly men. The suitmaker has also become much more responsive to customers’ special requests. “In the past, if someone said they wanted a bright pink suit, we might have said no,” Stowers explains. “Now, if you say you want it to have three arms, we’ll make it with three arms, but we’ll still make it bespoke.”

As Stowers suggests, the threat posed by the younger generation of designers to the old guard could ultimately benefit all Savile Row clients. “I’m personally all for new blood as long as they reinforce and maintain the skills,” says Nichols. “In this way I see them as a great asset. Long term, it’s a tough one to call, but the onus is actually on old Savile Row to make sure their suits are up to spec and remain the desirable items they truly are.”

Who’s Who on Savile Row