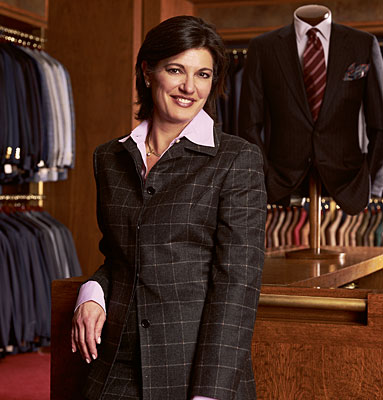 Over the course of her 16 years as a menswear buyer and personal shopper at Stanley Korshak in Dallas, Suzanne Warner has made some rather peculiar discoveries while cleaning out her clients’ closets, including pieces of sexy lingerie that her bachelor clients always swear were left behind by old college friends who had borrowed their places. But she will never forget the day when she came across a stack of rhinoceros hides and was asked to incorporate them into a wardrobe.

“The client had gone on an African safari and came back with many wonderful skins,” explains Warner, who arranged to have a local cobbler convert the armorlike hides into two pairs of cowboy boots. “After that it became a running joke,” she muses, explaining how the boots exhausted only a small quantity of the hunter’s haul. “Once you have your mount and your boots, what do you do with the rest?” If you’re Warner, you have them made into a set of travel bags and a gun case.

Transforming a man’s trophies into fashion accessories is not included in her job description, but for Warner and other private shoppers, providing idiosyncratic services beyond cleaning out and replenishing closets has become the rule. While women long have recognized the benefits of hiring personal shoppers, men have been slower on the uptake, in part because it can be daunting to relinquish control of one’s sartorial image to a stranger. Others are simply not aware that such services are available just for the asking.

For years, Saks Fifth Avenue has offered personal shopping services in 46 of its 63 stores through its Fifth Avenue Club. Although the complimentary service always has been available to men, few are aware of the club because of a lack of publicity and visibility; in each store, the club is located in a corner adjacent to the women’s designer clothing department—not an area frequented by male shoppers. “We don’t advertise the club,” says Nicole Profis, the club’s corporate manager of marketing and merchandising. “It’s kind of a best-kept secret.”

To better acquaint men with the personal-shopper concept, Saks recently launched a second club in the sixth-floor men’s department of its New York flagship. The club’s series of elegantly appointed rooms are equipped with private phones and flat-screen televisions that show the latest runway presentations. The club also offers restaurant service. The staff will coordinate your outfits and all the accoutrements, including footwear, hosiery, fragrances, and even jewelry. For those who prefer custom-made clothing, the club shopper will arrange a consultation with Saks’ bespoke tailor, Domenico “Mimmo” Spano. The club also offers same-day alterations and local delivery for off-the-rack purchases, and extended shopping hours.

The Fifth Avenue Club represents the corporate approach to personal shopping. Likewise, independent personal shoppers seek to provide comfort and convenience while catering to the whims of those who want or need assistance with looking their best. Clients sometimes confuse personal shoppers with private wardrobers, fashion consultants who, in the tradition of 19th-century tailors, produce custom wardrobes each season. However, personal shoppers do not design and make clothing, though some can arrange for those tasks to be carried out. Instead, they are employed by individual stores or work independently with various designer specialty shops.

Charges for personal shopping services vary widely; at some stores, it is complimentary, while independent shoppers may charge a 10 percent commission on purchases or a daily rate of $1,500 or more. However, Erin Ross, who owns Los Angeles–based Ease Luxury Shopping Service, has arranged for her commissions to be paid by the stores she patronizes, including Giorgio Armani, Yves Saint Laurent, Dolce & Gabbana, and John Varvatos.

In addition to selecting and securing the season’s essential items, most shoppers will catalog clients’ purchases and provide “look books” or computer databases detailing fully coordinated ensembles so that wardrobe selections can be made with the turn of a page or the touch of a button. They also stand ready to assist with packing for business trips and impromptu vacations, to rush emergency wardrobes to airports in the event of lost luggage, to overnight forgotten cuff links to business travelers who wear only French-cuffed shirts, or to shop for gifts for family, friends, and business associates. Moreover, their PDAs can be indispensable in a fashion emergency, such as when a tailor is needed to mend a tear in a tuxedo hours before a wedding.

Given the personal nature of their work, some shoppers compare their role to that of a psychologist or even a marriage counselor. “One time, a husband came in with his wife, who was so pushy,” recalls Suzanne De Lisi, a personal shopper at Paul Stuart in New York. “I advised him to take her out for a drink and come back later.” De Lisi says that some women can become possessive when another woman steps in to dress their husbands, but once they overcome those feelings, “a lot of wives are actually happy that I’m taking the job out of their hands.”

Warner notes that cleaning out a man’s closet can be a particularly challenging task that calls for tact, finesse, and a sense of humor. Occasionally a client will ask if he can have a favorite discontinued shirt or jacket remade, she says. “That’s when I try to explain that ‘discontinued’ means out of style. And we don’t want to go there.” She may soften the blow by showing him how to update something worth keeping, such as pairing a 3-year-old Kiton cashmere sport coat with a new pair of flat-front slacks instead of his usual pleated pants, or with a new shirt and tie. “My strategy is to push them slightly outside their comfort zone,” she says, “but always make the experience of buying new clothes enjoyable.”

Gauging a client’s personality and emotions is merely a sideline to a personal shopper’s primary responsibility of perusing, editing, and enhancing his wardrobe. The means for meeting that responsibility vary from one personal shopper to the next. “So many [clients] don’t have the time,” explains Ross of Ease Luxury Shopping Service, “and it’s overwhelming when they do go to the stores. Often there are just too many choices, and it becomes intimidating.” Ross alleviates the stress by bringing the store to the client, transporting racks of merchandise—suits, shoes, hosiery, and even undergarments—to a man’s home or office so he can make selections in his spare time and in private. She is often accompanied by a tailor who will make the necessary alterations to any garments that the client selects.

Like Ross, Micki Turner, a personal shopper in the San Francisco Bay Area, recognizes that her clients have little time for shopping. She therefore visits Wilkes Bashford, Courtoue, Neiman Marcus, and other stores, chooses items for her client, and arranges a meeting at one store for a fitting. “For most men it’s about time, and I find they want to go to only one store—definitely not more than two,” says Turner, who often works with large, difficult-to-fit men.

Of course some men enjoy selecting their own clothes, but they appreciate a little guidance in navigating large stores, such as Barneys New York or Bergdorf Goodman. The stores’ in-house private shoppers or VIP associates offer such assistance, and they also can provide services that extend beyond the sales floor. “A lot of my time is spent going through my database of clients and keeping up on what they’ve purchased in previous years, what they still need, how much weight they’ve lost or gained, if they spend half their time on water or in the air, and what hobbies or interests they have,” says Paul Stuart’s De Lisi, who photographs and codes each client’s purchases and enters them into a book or database, a copy of which she gives to the client. “That way, when their wardrobes need a boost, I have all the information to help them.”

Being familiar with the client’s preferences and lifestyle is essential to building his wardrobe, says David Watson, the manager of Saks’ Manhattan men’s club. “During the initial appointment, we get to know who the customer is, what they do for a living, and what occasions they need clothing for,” he explains. “We get to know if they are more conservative or avant-garde, what colors they like to wear, and which designers or manufacturers fit them best.” The staff also maintains a record of occasions for which gifts may need to be purchased, such as birthdays and anniversaries, and they can have merchandise brought to your home or office, where you can decide whether you want to purchase it. Above all, says Watson, the club is designed to provide a secluded place for working one-on-one with a fashion professional with no time limits, spending pressures, or hourly service charges. “What happens in here stays in here,” he adds, noting that privacy and discretion are among the club’s most alluring features. “Our customers don’t want anyone to know what they are buying or how much they spent.”

The Saks club also offers opportunities to acquire exclusive items from lesser-known luxury brands, such as Loro Piana, that are not offered in the store’s everyday merchandise mix. “We may not make the commitment to buy a collection for the chain, but we’ll bring a designer in for a couple of trunk shows to see how our clients respond,” explains Profis. “It’s a great opportunity for our club customers, because they get to see something new rather than the same Dolce & Gabbana and Prada they see everywhere.”

Gaining access to difficult-to-obtain pieces and collections and anticipating a client’s needs as well as his wants are hallmarks of a skilled personal shopper. Because she is also a buyer, says Stanley Korshak’s Warner, she frequently shops the European designer collections with particular customers in mind. “We just added Valentino for fall, and there was an incredible jacket that I knew would be perfect for one of my clients,” she explains. “I called him when it came in, and he showed up in his town car with his children and nanny and bought the coat as well as a bunch of other Valentino pieces.” Except for the occasional frill, such as a pair of rhinoceros-skin cowboy boots, says Warner, “Most men don’t know what they really need in their wardrobes until someone like me shows it to them.