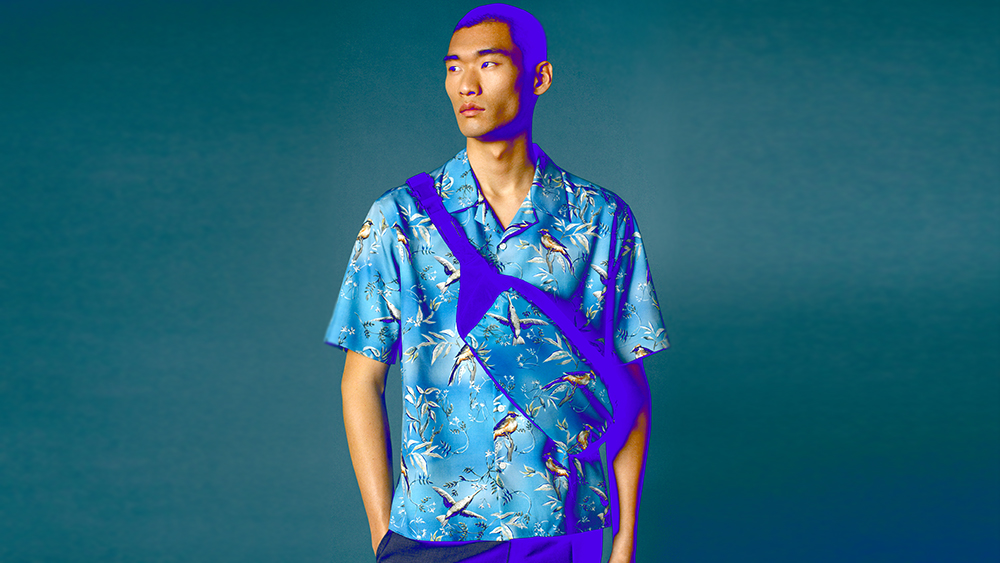 Around three years ago, Olie Arnold, the style director at the online menswear emporium Mr. Porter, noticed a selection of camp collar shirts in the collections of buzzy brands like Gucci and Saint Laurent. By the next season, Miuccia Prada sealed the trend deal in her fall 2016 collection, which included a collaboration with the artist Christoph Chenin. The product? Shirts printed with strange and fantastical images of Hercules, Cleopatra and James Dean. They were an unmitigated hit for the Italian brand, subsequently spotted on everyone from Virgil Abloh to Jeff Goldblum.

“That really put the camp collar shirt back on the map,” Arnold said. “The trend has flourished since.”

But you probably don’t need to be told that. Right now, all it takes is scroll through Instagram, a walk through your local watering hole on a warm weekend afternoon, or a glance at what celebrities are wearing on the red carpet to confirm that camp collar shirts—especially ones printed with festive, floral designs—have become as ubiquitous as Allbirds on the streets of Silicon Valley. For some, they’ve succeeded despite their kitschy connotations—think Magnum PI or Miami Vice—but to a younger generation with shorter memories, and therefore no such hangups, they have a winking retro appeal.

“More than likely, they were rediscovering them in vintage stores and just having some fun by sporting them for the weekend,” Fisher added. “I think the reason why it grew into a trend happened to coincide with the splashy excess we’ve seen ever since Gucci was reinvented with the arrival of Alessandro Michele.”

In a way, the shirts embody the menswear scene today. Guys, once sidelined for years into wearing staid suits or boring basics are now stepping into their own, thanks in part to the bold looks pioneered by the marriage of the streetwear and luxury worlds. While womenswear is still a much bigger business, last year a report from Reuters noted that menswear is set to outpace that market, in part thanks to changing style norms and the maturation of the millennial into a bona fide luxury-hungry consumer.

“Right now, men are in the midst of a major peacocking moment,” Fisher said.” The more noticeable, and whimsical, the better, when it comes to style.  Men are not secondary supporting characters in personal style anymore. They’re all given permission to express themselves and wear what is fun.”

It doesn’t hurt that brands have been quick to catch on. There’s a $1,250 version from Valentino on Mr. Porter right now, while Maison Margiela is offering one in a romantic, abstract print for $1,780. There are also versions from Givenchy, Louis Vuitton, and Saint Laurent—but because the fashion market has been flooded with them, you can have your pick at virtually any price point.

Miles Teller wore a camp collar shirt from John Elliott at Cannes in May; Last year, Nick Young wore a version from Prada at the Espy’s.  Shutterstock

Celebrities ranging from Harry Styles and Justin Bieber to athletes like Nick Young and James Harden have all given it a whirl. Miles Teller made headlines by wearing a version with a distinct Rat Pack vibe at Cannes. Cult menswear figure Shia LaBeouf recently wore a brown Hawaiian-style shirt.

And while social media has sped up many trends’ timelines—compressing their shelf life from a few years to a few months—the festive camp collar shirt has an impressive staying power.

“I think both men and designers appreciate the camp collar’s versatility,” says Alexander. “It can be worn to the office, on a date or under a suit. And in the summer months, when you’re trying to keep cool, it’s the perfect lightweight piece that can effortlessly make your outfit pop.”

Fisher hints that there may be some strange optimism attached to the shirt. “I think it’s a necessary contrast to an otherwise uncertain world,” he says. “The economy is booming, which probably explains some of the excess and maximalism. But people are also finding ways to cope with a lot of darkness by wearing super vibrant pops of color and pattern.”

Still, like all good things, the Hawaiian shirt craze looks poised to come to an end. “I think we’re in for at least one more summer full of whimsy,” Fisher says. “We’re forecasting a bit of a calming of the senses for next year, or a fresh new approach to more minimal and zen styles that aren’t stark whatsoever. Things will still be colorful, but the styling will be more subdued and less outlandish. It’s just the necessary contrast to a moment.”

Which means: indulge while you can.

The products featured in this story are independently selected by Robb Report’s editorial staff. However, we may earn a small commission if you buy something on this page.