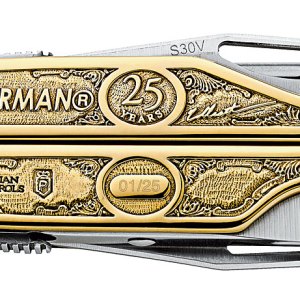 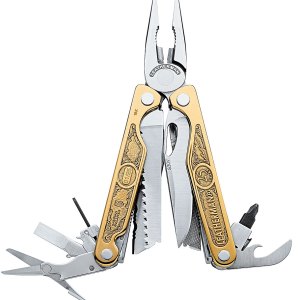 Accessories made with gold and diamonds need not sacrifice function for form. The finer examples of these items can perform such tasks as telling time, fastening the cuffs of your shirt, or—in the case of the $40,000 Leatherman Charge Del Rey (www?.leatherman.com)—gutting a trout.

The Leatherman Tool Group’s stainless-steel pocketknife—an 18-function device with an 18-karat-gold-plated handle, a diamond-coated file, and tools for, among other uses, tightening screws and opening bottles—commemorates the 25th anniversary of the Oregon company’s founding. (The firm’s initial product, released in 1983, was the $40 Pocket Survival Tool.) Leatherman commissioned only 25 examples of the Charge Del Rey (one for each anniversary) from Argentinean silversmith Adrian Pallarols, whose previous works include polo trophies, a pen for King Juan Carlos of Spain, and a goblet for Pope Benedict XVI.

Among the engravings on the Charge Del Rey’s handle are Pallarols’ name and crest and company founder Tim Leatherman’s signature. The tool is part of the firm’s Pallarols-designed Argentum Collection, a line of seven models including a $12,000 version. The line also offers a model that, at $240, is perhaps better suited for cleaning fish.