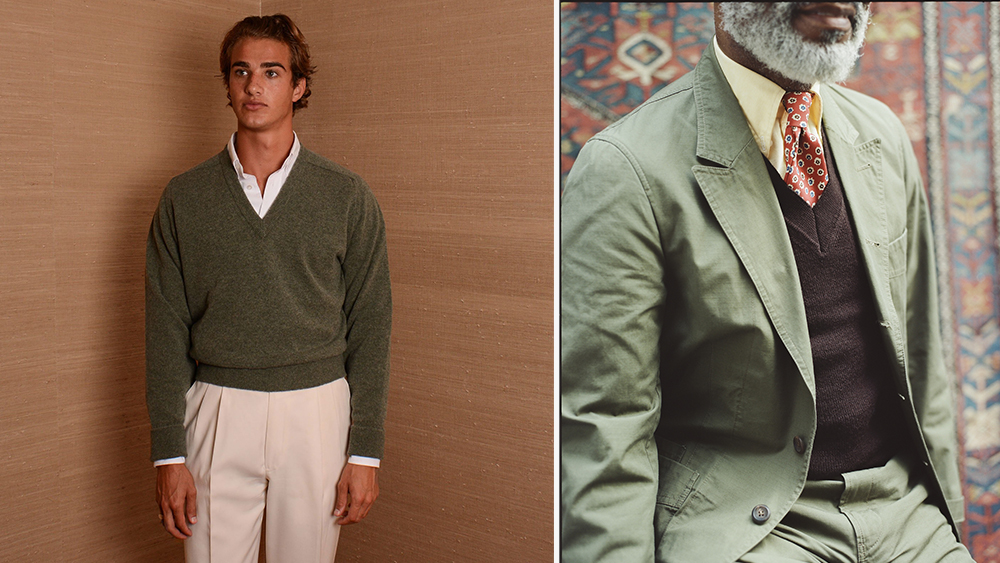 V-neck sweaters have a bad rap. They generally bring to mind stuffy old men who wear too much purple and possess as much style as they do teeth. It may not be the most inspiring garment but, when done right, a V-neck can be an incredibly elegant and louche piece of knitwear to sport.

If this season’s offering is anything to go by, the V-neck is very much back on the menswear menu. Why the change in attitude? Simon Chilvers, men’s content director at Matches Fashion, has a few thoughts.

“Surely, the enduring point about this particular style is its very usefulness and ability to work in loads of different contexts?” Versatility is always a bonus, and an especially big one this fall. Chilvers notes that a V-neck “looks great against bare skin. It works with a tie or an Oxford collar. It’s great under a denim jacket or a blazer. It goes with a polo neck layered beneath and works as a partner to a polo shirt or T-shirt, and so on. Basically, it works hard as a garment.”

While V-neck’s resurgence has been clear in the last few years, the standouts this season are those with a deep and thick neckline. It’s certainly a touch retro, and even a bit more stylistically bold. “The prevailing trend in recent years has been to have a much shallower V, which for my money isn’t dissimilar enough from a crew neck,” Drake’s Michael Hill tells us. “A deeper V-neck, however, creates a more dynamic visual impression and shows a little more of the shirt underneath.”

This deeper V is a design element that’s also seen in the Swedish up-and-comer Rubato’s collection of knitwear that nods at midcentury style. Co-founder Oliver Dannefalk explains that “Back then, there was not as much washing being done to the garments in production. Therefore, a lot of the wool’s natural oil was left and worked as protection. We didn’t want to produce a vintage-inspired knit per se, however, we wanted to use the benefits from such a product and transform it to a wearable piece in a modern context.” They’ve done just that by shortening the body to accommodate high-rise trousers—a thoughtful touch that ought to excite classic menswear enthusiasts.

If you’re new to the V-neck, wearing one is very straightforward. “The rule of thumb is that chunkier versions are more casual, and finer gauge ones are usually better in formal situations,” states Chilvers. “However, right now the rules around fashion are pretty redundant. Though if we’re going with the current zeitgeist, then yes, of course, a V-neck will work on Zoom.”

With that said, here are eight of the best V-necks to consider right now.