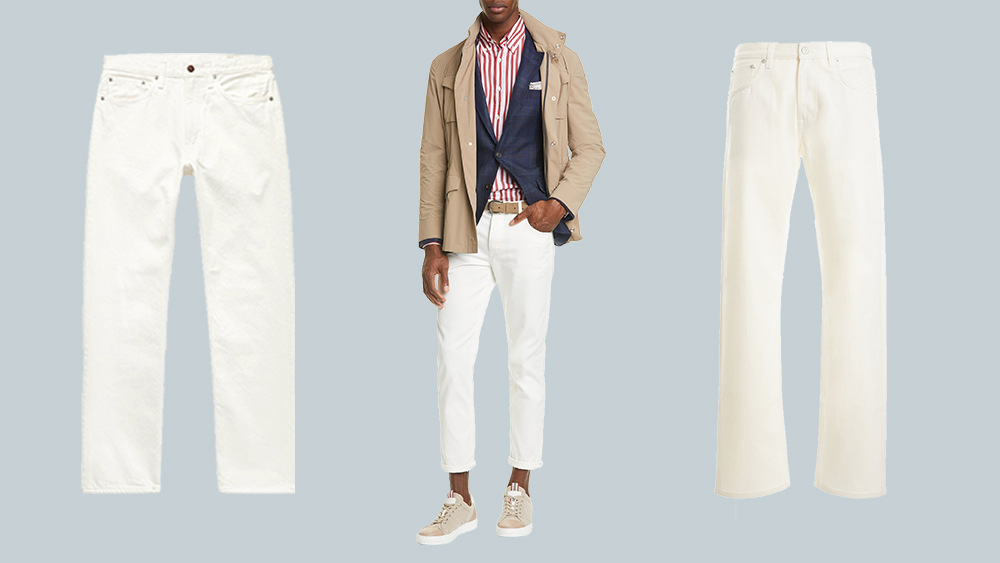 Achieving the correct shade of white is more of an art than a science. A new Porsche 911 flying by in blinding white might be a far cry from elegance, but a vintage eggshell Porsche 356 defines elegance. This nuance is the beauty of white, a color that improves so few things that you always remember when it does. Denim is certainly one of those things.

Finding white denim that works for you can be daunting, but the main rule (like so much great menswear) is make your own rules. “They should be at least two or three days dirty,” says Ramdane Touhami, founder of Paris/Japan-based apothecary empire Buly 1803, “worn with a few paint stains, an off-white cashmere sweater and Birkenstocks.” While some let nature take its course, others look to cult favorites––or Japan—for that lived-in patina. Gauthier Bosarello of l’Etiquette Magazine and Le Vif boutique is loyal to his first pair from Anatomica, also scouring eBay for 1980s Levi’s 505’s. “I love white denim as a uniform on men with impeccable taste, who appreciate aesthetics,” he says, noting Peter Saville––the graphic designer who gifted the world with New Order and Joy Division covers––among his favorites.

Success is easily identified and usually comes in a stylish form of can’t-touch-me nonchalance. It’s a rebellious air of ignorance, or indifference, to the fact that one’s clothes are susceptible to disaster at every turn: every meal, every outdoor seat, every subway ride brings the threat of stains. The white ensemble Gary Cooper wore while fishing and sailing was only made better by the giant fish he caught while wearing it. He knew that the secret to wearing white well is not being too precious about it.

Not convinced? I was a white denim skeptic until Brunello Cucinelli and Tonne Goodman, unknowingly, converted me with the relaxed character they brought to theirs: always a little loose, just gracing the ankle bone and paired with neutral tones like grey or beige. Jamie Ferguson, the charming style photographer, took to wearing them after seeing how fellow photographer Robert Spangle treated his like any other well-loved jeans––stains be damned! The point of white denim is to live a full life in them––a little less polished, a little more unruly.