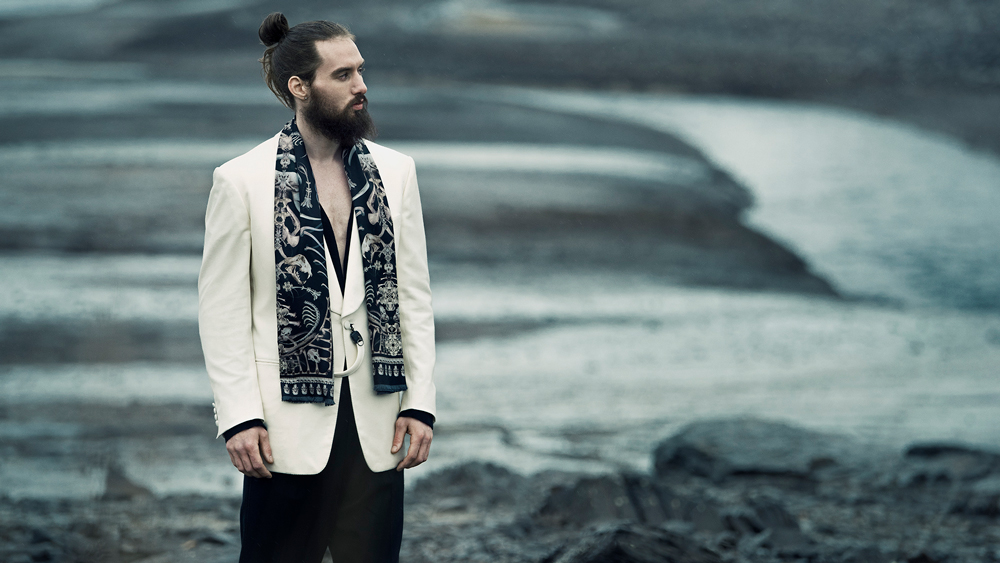 When British designer Alexander McQueen passed away in 2010, the fashion world suffered one of its greatest losses in modern memory. But at least some of his pace-setting DNA continues. His nephew, Gary James McQueen, who worked as a textile designer under his prolific uncle, has recently been working with Savile Row stalwart Anderson & Sheppard to design a collection of elegant silk evening scarves (starting from $350), which bring a neo-romantic splash to buttoned-up formal affairs.

The scarf is a particularly good medium for a textile designer. “It’s a frame in which you can make wearable art,” says Gary, 37. “The scarves are a way to bring a touch of occasion and a bit of social theater.” Inspired by Japanese prints, the scarves feature patterns that belie their initial prettiness with motifs of skulls and insects. There’s a hint of Gary’s earlier work as a graphic designer in his designs as well as a huge nod to the spirit of his uncle, for whom he worked for 5 years.

“Lee [as Alexander’s friends and family refer to him] pushed the boundaries,” says Gary. “I wanted to bring that same sense of storytelling to the collection.” Gary’s collaboration with Anderson & Sheppard is also a nice full-circle moment, as Alexander McQueen started as a pattern cutter at the tailor. That said, Gary considers himself more of an artist than a fashion designer: “I like images and stories, soul and emotion.” Next up, he wants to try his hand at designing kimonos—but first, he shares his favorite ways to wear his art-level scarves.

The Loop (aka the Parisian or European Knot)

For a chic city look, fold a long scarf lengthwise, and then wrap it around your neck and pull the loose ends through the loop created by folding the scarf in half. Keep the knot closer to your neck, and tuck the ends into your coat for a put-together way to keep warm on blustery days.

This style is as simple as wrapping one end of the scarf all the way around your neck, leaving two dangling ends. The result is casual and cozy, but for an extra dose of attitude, allow one end to hang lower for a louche look.

This urban look renders the scarf as a slim extra layer, leaving it draped around your neck with both ends loose. Think of it as a nice way to add a pop of color to a buttoned-up business suit or classic black smoking jacket. To keep everything looking chic and not sloppy, be sure to button your jacket over the loose ends.

For the ultimate raffish style, place the scarf around your neck, and throw just one end over your shoulder in asymmetric elegance. This tie can be a bit hard to maintain, but it’s a nice way to add a touch of Bohemian nonchalance to tailored outfits.

This dandy-inspired knot is ideal for showing off a lushly patterned silk scarf. Start with the scarf draped around your neck, and then cross the ends over each other in a simple knot. Pull the knot closer to your neck if you plan to button up your jacket, or leave it loose for more casual looks.

As it suggests, this knot offers serious protection, making it a go-to style for long-haul travelers and desert explorers. Start with the scarf draped around your shoulders with one end dangling long and the other close to the base of your neck. Wrap the longer end around your neck as many times as your scarf allows, tucking any excess underneath.