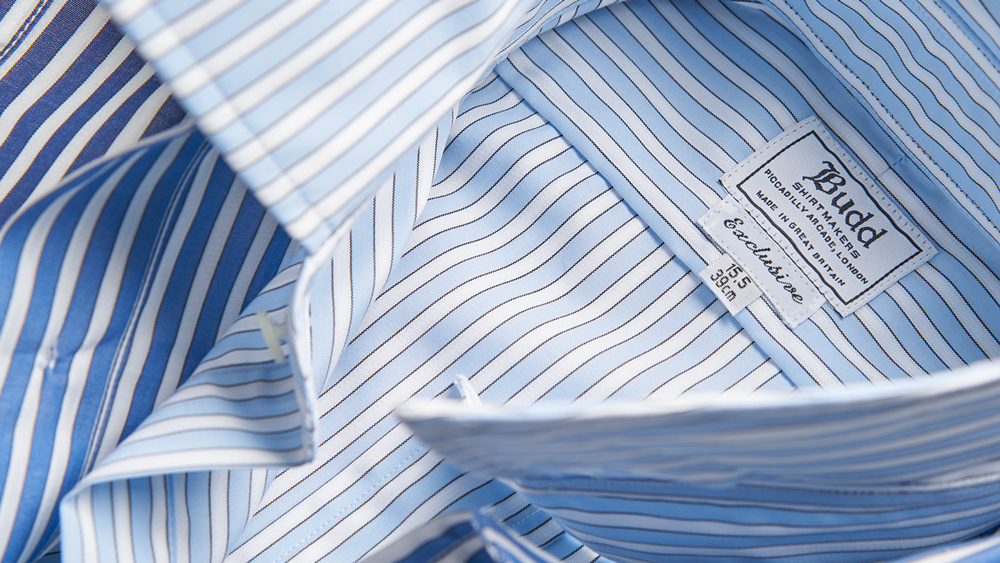 For something as seemingly straightforward as a button-down shirt, the amount of details it’s possible to get hung up on is staggering. There’s the fit, the fabric, the cuffs, and—perhaps most complicated of all—the collars. To the untrained eye, the differences between various styles are subtle, often only distinguishable by millimeters of fabric. But when you’re unwittingly wearing a tab collar without a tie, these distinctions speak volumes.

To help decode the difference between a spread and a cutaway, and what styles you really need to have on the ready, we turned to Budd Shirtmakers—a London-based tailor that does exactly what its name suggests: make exquisite shirts, in nearly every style you might imagine. Here, with the help of senior cutter Darren Tiernan and bespoke cutter James Macauslan, we break down the basics.

It doesn’t get much more classic than a forward point—which is sometimes also referred to as just a “point collar.” It’s distinguished by points (the tips of the collar) that narrowly frame a tie, fully visible even when you’re wearing a blazer or sport coat. “Budd’s main collar is a [forward point],” explains Tiernan. “It’s timeless, flattering to almost everyone, and works well both with and without a tie.”

Slightly more modern, both spread and semi-spread collars have points that angle out towards your collarbones, and should tuck just under the lapels of your jacket (the semi-spread is incrementally narrower). “The points are slightly more open than a conservative forward collar,” says Tiernan, “allowing for a fuller tie knot.” That more expressive knot and neat tuck make for the perfect subtle fashion statement, appropriate for even the most conservative of offices.

Where the spread is demure, the cutaway is bold. Distinguished by its stiff, short shape, its points angle even further outwards than the spread collar, letting your tie take center stage. The style, which is also sometimes referred to as a Windsor collar, originated in the 1930s as a way to accommodate the wide Windsor tie knots which were coming into style at that time.

Though many of these styles are British or Italian in origin, the button-down is all American. Developed by Brooks Brothers in the early 21st century (the brand, which is celebrating its 200th anniversary this year, also was the first to make shirts with the collars attached), the points of this collar—which angle closer to those of the forward collar described above—are fastened down to the shirt with buttons, allowing for it to look sharp without feeling overly stiff. “Button-downs are perennial favorites as they sit nicely under a jacket or sweater without a tie,” says Tiernan. He and Macalusan also suggest wearing the style slightly open, for a sexy dose of nonchalance.

Think of the tab collar, with its long, straight points, as the forward’s dressier cousin. It was one of the very first kinds of collars ever developed, attached to the rest of the shirt with a hidden fabric-covered button. Today, wear it—or the pin collar, which swaps that button for a sleek metal bar—to your next wedding, or with your favorite power suit for that all-important presentation. Be sure to heed Tiernan and Macalusan’s advice and always pair this style with a tie. “The two flaps look untidy and the intent of the shirt is missed entirely [without one].”

Like the cutaway collar, the penny round (or club) is not for sartorial wallflowers. The style, which features points that are softly rounded off, was developed to distinguish the uniforms worn by boys who attended Eaton from other top schools—and when worn incorrectly can lean overly dandyish. Reserve it for occasions when you want to make a statement, but don’t need to be overly formal—think a cocktail party or more casual wedding—and always be sure to wear a tie.

Though arguably not as versatile as the styles above, the neckband or grandad collar—which really is a shirt without a collar at all—makes for an easy smart-casual option. “The neckband shirt is a great alternative to [traditional styles],” Tiernan says. That said, he advises paying close attention to the fabric from which your shirt is cut: stick with light linens on vacation, and go for a sturdier twill at the office.

Have a style question? Send it over to feedback@robbreport.com and we may just answer it in a future RobbReport.com story.