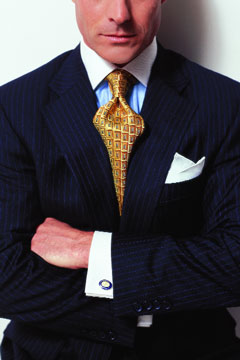 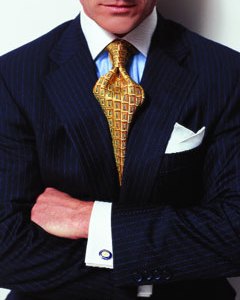 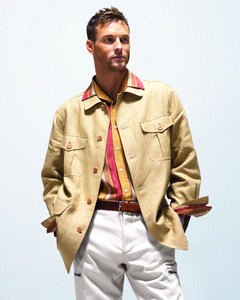 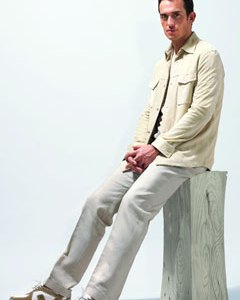 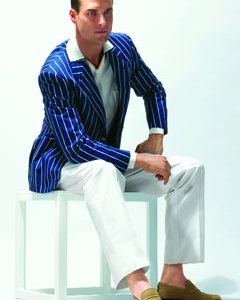 You don’t need a compass to recognize that the concept of mobility is the prevailing undercurrent for spring fashion. From suits and sportswear in natural, wrinkle-resistant cloths to retro-inspired resort wear to updated nautical and adventure gear, menswear is exploring new territories.

For instance, suitmakers Ermenegildo Zegna, Belvest, and Cantarelli clearly did not have the office in mind when they developed swimwear, double-breasted twill yachting jackets, and regatta-striped blazers, respectively. Ferragamo says that its cotton gabardine coats and hammered cotton/linen shirts are designated “for out-of-town travel, motor racing, and sailing.” Designer Nino Cerruti adopted Jack Kerouac’s On the Road as the inspiration for his featherweight, textured flax blazers and double-faced cotton shirts colored in a Southwestern palette. Meanwhile, Canali’s pastel suits and jackets finesse the formality of business apparel with a flourish of vacation ease.

Perhaps Missoni best set the tone for the season’s escapist theme when it presented its collection against a backdrop of projected images that alternated between a busy airport terminal and serene white beaches. The collection, however, did not travel simply from the boardroom to the boardwalk. With its twisted cotton cardigans and zigzag-patterned drawstring pants reminiscent of the 1950s, the company, like so many others, transported menswear back in time.

With so much attention given to deconstructing men’s tailored clothing to lighten the load and enhance the comfort factor, suitmakers have had a tendency to overlook the seductive power of structured suits—but not anymore.

This spring, men’s tailored clothing exudes the sort of confidence a man can feel only when he is dressed for success. This means Prince of Wales plaid or pinstriped suits, sometimes double-breasted, with strong roped shoulders and nipped waists, worn with straight-leg trousers. Or there are the new sculpted single-button jackets proposed by Giorgio Armani, Valentino, and Dolce & Gabbana, who pair them with fluid, generously cut slacks. Such combinations recall the suave look worn by the fedora-topped protagonists of black-and-white gangster movies. However, suitmakers have modernized these classics by adapting them in bright colors and contemporary, travel-friendly wrinkle-resistant fabrics, such as wool/silk, wool/linen, wool/mohair, summer-weight cashmere, and superfine micron wools, some finished to look like cotton. Even many sport coats, although unconstructed, are cut closer to the body. Shown in inventive blends of cashmere/cotton or cashmere/silk/linen, these jackets are soft without looking slouchy, for just the right touch of urban chic.

It’s all about “structured tailoring combined with fluidity,” says Tom Ford, whose collection of double-breasted suits with sinuous wool/silk trousers for Yves Saint Laurent (mined from the Parisian master’s archives) captures the very essence of what tailored clothing should be.

When designers as diverse as Ralph Lauren, Jean Paul Gaultier, Luciano Barbera, and Hedi Slimane for Christian Dior add multiple cargo pockets to elegant trousers and belts to fitted jackets, you know menswear is in a rugged mood. The utility pant and bush jacket are back. Although seemingly conceived with big game hunters in mind, these clothes have nothing to do with blending into the scenery. For the most part, these are highly functional pieces designed for the international jet-setter who needs plenty of pockets to carry all of his gadgets. In fact, the popular lightweight multi-pocketed jackets are more evocative of The Great Gatsby than Out of Africa. Their origin is traced back to informal Norfolk jackets worn by English country gentlemen, specifically the Duke of Norfolk, in the early 18th century. Yet the contemporary interpretation is influenced by the belted, high-waisted American jazz suit of the 1920s (when the military-inspired pockets were added) more than the hybrid safari styles of the 1960s. Additionally, by rendering them in slimmer shapes—and sometimes pairing them with long-sleeved piqué knits or patterned waistcoats—suitmakers have given these updated bush jackets a dash of polished panache.

When confronted with an uncertain world, menswear designers get back to comforting basics by infusing their collections with earthy colors and natural fabrics, the fashion equivalent of a soothing cup of herbal tea.

As designers bring menswear down to earth, they have not lost sight of the high-flying nature of modern lifestyles. Many of these yarns and fabrics have built-in stretch features for added comfort or have been treated to make them impervious to wrinkles.

One of the sea changes in fashion this season is a preoccupation with the color blue. From ocean, sky, baby, and navy to cobalt, periwinkle, and powder, blue reasserts itself as menswear’s endlessly versatile—and most wearable—color. It also helps reinforce another prevailing warm-weather trend: nautical looks.

You don’t have to know how to navigate a ship to ease into one of the season’s most sartorial pieces: the yachtsman’s blazer. Naturally it comes in the original double-breasted navy variety first worn by the crew of the HMS Blazer in the 1860s, as well as in an updated version of a club jacket with crest-emblazoned chest pocket, adopted some years later. Still, the revival of the vertically striped blazer, a sport look that set the standards in the 1940s, is making the biggest wave. The jacket made famous by English schoolboys has been reissued in everything from pinstripes and wide awning stripes to colorful variations of regimentals and regattas.

The sailing set is also the inspiration for a plethora of fisherman sweaters, nautical-striped jersey piqué knits—some with boat necks—and the all-important storm coats and vests built for extreme weather conditions. Also look for a cache of beachwear and accessories produced by the most unlikely of sources: luxury suitmakers Ermenegildo Zegna, Ferragamo, and Luigi Borrelli.

Designers in search of all things nostalgic have once again combed the Mediterranean shores of the French Riviera and nearby ports of call. For example, Dolce & Gabbana pairs sexy and sophisticated suits with suave dark shirts accented with contrasting Capri collars spilling over the lapels the way Cary Grant’s did when he romanced Grace Kelly around Monte Carlo in the 1955 film To Catch a Thief.

Similarly, Brioni took the road to steamy Morocco with virtually weightless pieces in Mediterranean hues, including peach cashmere jackets, vivid regatta-striped cotton drill blazers, and sherbet-colored golf pants. The company even brought its travel jacket—an 18-pocket variation on the California leisure look of the 1940s—out of retirement. “We are considering a man who may order 50 suits per season,” explains Umberto Angeloni, the company’s managing director. “He needs ingenuity. He isn’t interested in another navy blazer. He can afford to indulge in a baby pink or lemon cashmere blazer.”

Among the most notable of the resurrected styles are the multi-pocketed, biswing (double-pleated), belted-back blazers identified with 1930s Hollywood directors and wide-legged white linen or seersucker dress slacks that move with a silky swagger. Other retro-glamorous offerings include colorful madras Bermuda shorts and popover shirts, antique floral-print cabana tops, and cashmere V-necked and cardigan sweaters in malt shop shades of chocolate, orange, banana, and pistachio green. Naturally, pocket squares are de rigueur, while a Panama hat and white bucks or two-tone spectators complete the debonair look from head to toe.