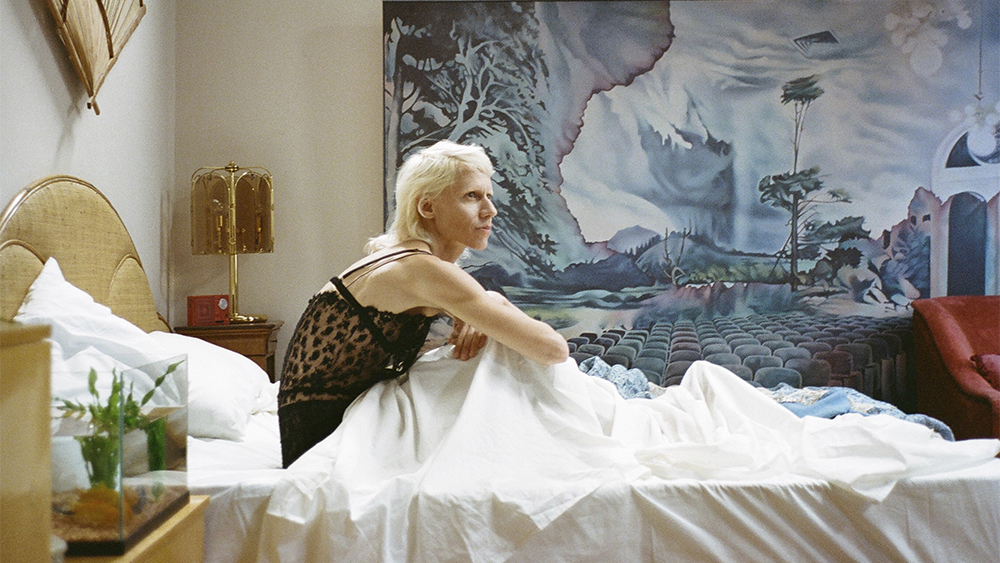 With her frosty white hair, Roman profile, lean, muscular body and unnerving gaze, the Italian actress Silvia Calderoni is an arresting, jolie laide muse. All of which makes her an ideal protagonist for Ouverture of Something That Never Ended, the atmospheric, rambling film that Gucci presented in lieu of a traditional runway show this season.

Co-directed by cult filmmaker Gus Van Sant and the brand’s creative director Alessandro Michele, the movie is, in part, a response to the ongoing restrictions put in place by the Covid-19, a way for Gucci to put its spring-summer collection (and creative prowess) on display without staging the traditional splashy catwalk spectacle. It’s also part of a bigger shift as the luxury brand breaks away from the traditional fashion calendar. In May, Michele announced that, moving forward, Gucci would forgo its five(!) runway shows per year (one for men and women each season, plus a roving “cruise” collection shown in various far-flung locales) and streamline its annual presentations to two seasonless, genderless collections.

Alessandro Michele and Gus Van Sant behind the scenes during filming.  Paige Powell

Unveiled in seven episodes over a week, the film was the tentpole of an online cinematic festival aptly titled GucciFest, which also included an assortment of short films by various global creatives.

Ouverture is ostensibly about a day in the life of Calderoni’s androgynous and glamorous character (also named Silvia) as she perambulates around town. We follow her while running errands—to the local cafe, the post office, the theater, a vintage shop—and interacting with various friends and strangers, all of whom are wearing Gucci, of course. A vast slideshow of all the looks is available on Gucci’s website.

There’s a sense of dreamlike malaise over the film—a Van Sant specialty—decorated with the muted hues of Necco wafers and sets that are mid-century with a millennial filter. Michele’s collections for Gucci have always been expansive (if eccentric) in style and because of that, his designs easily clothe everyone from Calderoni and her familiars—which include cameos from famous names like Florence Welch, Billie Eilish, and Harry Styles—to the rest of the fabulously attired extras.

While the film is long, surreal and filled with erudite musings, it has the benefit of doing something that even the best runway shows oftentimes cannot: it builds out a fully-fleshed world and brings Michele’s designs into the everyday. It’s not quite reality, but adjacent to it. Much like Ralph Lauren’s famous ads and J. Crew’s beloved catalogs, the film not only shows the clothing in motion but in situ. A film, no matter how vaguely plotted, helps place them in a story, in a context, so even the most casual viewer can experience the collection’s particular nuances and characteristics in vibrant detail. Instead of being shown on models blitzing down a runway, the clothes are worn by people biding their time in line at the post office or languidly sipping an espresso.

As to what they’re actually wearing, there’s the familiar pile-up of clothes and accessories. Anyone who’s seen a Gucci show knows that Michele is not one for restraint. It’s a decadent hodgepodge: graphic T-shirts and tracksuits, natty suiting that ranges from trimly tailored to voluminous and flowing, throwback sportswear, oversized eyewear, statement outerwear, gender-bending blouses, denim with plenty of ’70s swagger. There are classic menswear checks alongside florals, silks, sequins and lace. There are logos galore, but also more understated fare like roomy chinos and knit polos. There are the brand’s infamous loafers, retro-style sneakers, bourgeoise bags, sporty backpacks. And on and on and on. It’s a lot of stuff, but as seen on Calderoni and crew, it’s all covetable—not just the clothes, but the life they’re living. Who among the isolating masses wouldn’t watch such vibrant, interactive street scenes wistfully? (And no masks, to boot!).

From a cinematic point-of-view, the movie’s all mood, no plot. If there is any sort of storyline, it’s disjointed and incoherent, stabbing blindly at broad ideas of inclusivity. Themes and ideas bubble up, then promptly slip away. The dialogue is ruminative at best and nonsensical at worst—in either case, the words are hardly illuminating. Watching it can be at turns frustrating or soothing. One minute it feels belabored, yet moments later it’s calming eye candy. It’s a big mixed-up stew, but it’s definitely evocative and mysterious.

Details from the spring collection, including a cameo by Harry Styles.  Gus Van Sant

Is it successful? Well, that depends on what it’s supposed to achieve. It certainly succeeds in selling the Gucci dream—and that’s the baseline goal, one would imagine. But watching it over the course of a week, it also proved to have certain artistic merits too. Despite being confounding, in many ways, the films’ oddities reminded me of the purgatory of a year we’ve had. We’ve been living in a world where nothing seems to add up, where time has felt both stretched-out and condensed. Could Gucci, Van Sant and Michele be trying to reflect the destabilizing realities that have engulfed the globe over the past eight months? Doubtful. This is, after all is said and done, a long commercial.

And yet, by making a film that documents the mundanity of everyday life while swapping logic for fantasy, they’ve perfectly captured the weird moment in which we are living. And most importantly, they’ve conveyed why fashion, of all things, is a popular distraction for trying times.

View a few of our favorite episodes, below.