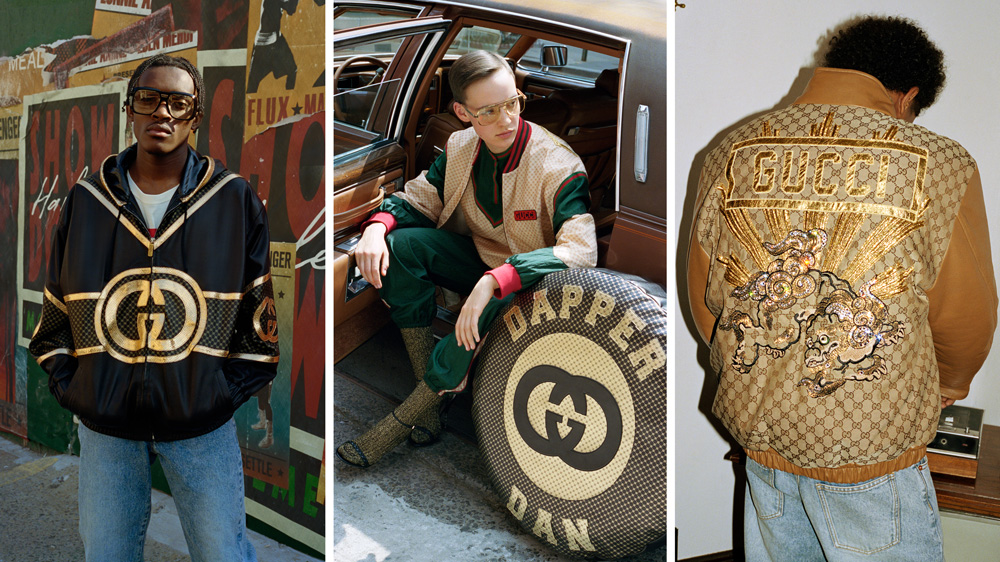 Gucci has always had a penchant for the flamboyant—think over-the-top branding, bold clashing colors, and seriously sexy silhouettes. This singular aesthetic has a way of inspiring imitators who sometimes co-opt the visual cache of the GG logo for their own fashionable purposes. And perhaps no one has done this better than Dapper Dan, the swaggering tailor who outfitted everyone from LL Cool J and Salt-N-Pepa to Floyd Mayweather Jr. out of his Harlem-based shop in the 1980s and ’90s. The musically minded, energetic style he popularized laid the foundations of hip-hop’s visual identity, filled with metallic leathers meant to flash under stage lights, slouchy tracksuits in vibrant colors, and all-over logos—often ripped straight from the biggest designer names of the day, Gucci included.

Now, the Italian house has teamed up with the Harlem icon, launching the playfully meta Gucci x Dapper Dan collection last week. Simultaneously, the debut has relaunched Dapper Dan’s atelier (now open to a select few for VIP appointments), which had closed in 1992.

Inspired by Dapper Dan’s “knockups”—so called because the one-of-a-kind pieces borrowed from the real thing so extravagantly that they became so much more than simple replicas—the sweeping collection dials up the outré factor of his best-known silhouettes. This time around, oversized unisex nylon tracksuits (pants from $1,300; jackets from $1,890) in emerald green, vintage-looking off-white, and fire-engine red feature the real Gucci logo and are emblazoned with louche gold-printed python and Gucci Garden patches that nod to the style codes of both designers.

An embrace of the long-standing synergy between street wear and high fashion (which, with brands like Balenciaga and Prada forgoing more buttoned-up aesthetics for sporty, dressed-down looks, is only becoming more and more visible), it is obvious that this collection is not for the sartorially faint of heart. The tamest pieces include a black-and-tan V-neck wool sweater ($1,300) inspired by a custom car interior done by Dapper Dan, low-top sneakers with flashy gold stripes ($1,150), and T-shirts and sweatshirts ($650 and $1,500, respectively) printed with a vibrant yellow Gucci logo inspired by the script on the window of his original Harlem store.

Other pieces are just downright fun. Oversized glasses are studded with Swarovski crystals, bomber jackets are loaded with embellishments and logos, and heavy gold chains are made purposefully gaudy. It’s doubtful that most of us will be able to get away with wearing any these pieces in our day-to-day (though the collection’s roomy backpacks could be a cool upgrade to your workday tote), but that’s what makes it so covetable. It represents the full force of what Gucci under Alessandro Michele does best: a winking, slightly subversive, and definitely unadulterated expression of the joy of fashion, in all of its contradictions and excesses.