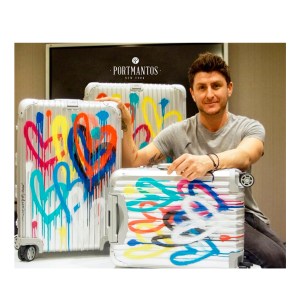 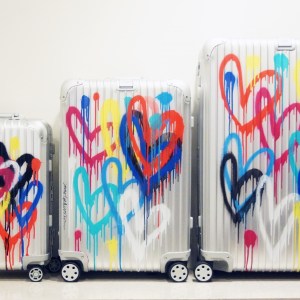 NEW YORK (Dec. 9, 2015) – PORTMANTOS, the premier online boutique for luggage and all things travel, is thrilled to announce its collaboration with acclaimed artist and photographer, JGoldcrown. Goldcrown has hand painted a limited-edition set of Rimowa luggage which will be auctioned on the online auction platform, Charitybuzz, with proceeds benefiting Boys & Girls Clubs of America.

Known for his #LoveWall of #BleedingHearts, Goldcrown’s murals can be found throughout New York City; from Soho, to the Lower East Side, to Williamsburg. The colorful layers of “bleeding” hearts are a distinctive symbol of Goldcrown’s distinguished design. Employing this signature technique, Goldcrown has adorned the silver aluminum surface of a 3-piece set of Rimowa luggage.

Said Goldcrown, “I am thrilled to have had the opportunity to collaborate with Portmantos on such a unique project. Painting my bleeding hearts in a non-traditional way, while also furthering the mission of Boys & Girls Clubs of America in the process, is both a humbling and rewarding experience.”

In addition, the winning bidder will spend the day with JGoldcrown at his studio in Brooklyn, custom designing a fourth piece of Rimowa luggage to complete the set.  The auction is open for online bidding today through Dec. 21 at 3 p.m. EST by visiting http://www.charitybuzz.com/JGoldcrown. The starting bid begins at $1,500.

PORTMANTOS is the premier online boutique for luggage and all things travel. Committed to exceptional quality and superlative service, PORTMANTOS offers a truly personal shopping experience. In addition to their meticulously hand-selected products, customers have access to exclusive benefits including concierge services, a personal travel advisory, VIP programming, white-glove delivery and more. PORTMANTOS believes that the shopping experience is not just about the destination, but also the journey. www.Portmantos.com

Born in West London, James Goldcrown is a self-taught artist/photographer now based in New York. JGoldcrown left school when he was 17 and started working in a South London darkroom, leading him into a career as a fashion photographer. In 2004, after 7 years in the industry, JGoldcrown took a break and went to Africa to make the documentary “To Die No More” which highlighted the AIDS/HIV epidemic. TDNM won 2 awards and raised over £10,000 which was donated to the people featured in the film.

In 2007 JGoldcrown moved to New York and re-entered the fashion world. He began incorporating mixed media into his photography influenced by his previous days as a street artist in the early 90’s. In 2014 JGoldcrown started a workshop called The Shed Project which allowed people to interact in his studio space. In 2015 he had his first show at Miami Basel where his work sold out in 2 hours. JGoldcrown has murals around New York, his work has sold all over the world, and counts Island Records, Universal, & MTV among his clients.

Charitybuzz raises funds for non-profits around the globe through online auctions with the world’s most recognizable celebrities and brands. Featuring access to acclaimed actors and musicians, business and political leaders, sports stars, luxury travel, couture fashion, rare memorabilia and more. Charitybuzz brings its online community of bidders exclusive opportunities to live their dreams and make a difference. Since launching, Charitybuzz has raised more than $150 million for charity. To learn more, visit www.Charitybuzz.com.