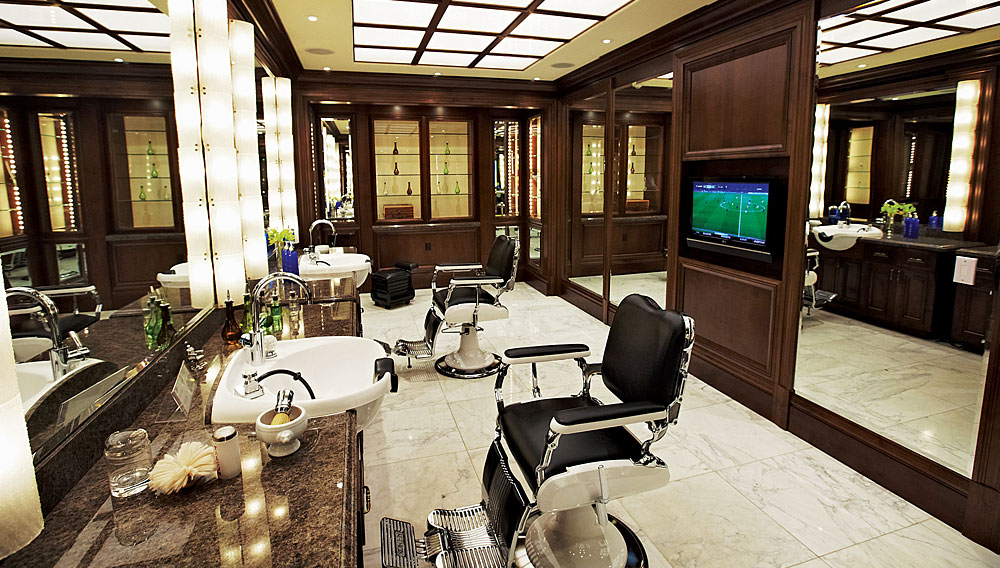 Before he begins working over my shoulders, neck, and scalp with a pair of handheld vibrating gadgets that look like small steam irons, William Gornik—owner of the two Gornik & Drucker barbershops in Beverly Hills—tells me the Scientific Rest Facial will be no ordinary grooming experience. That claim quickly proves to be true: No haircut and shave has ever relieved my mind of stress and my body of tension the way this massage does.

When he senses that I am sufficiently relaxed, Gornik applies a succession of steaming towels to my face and neck, to soothe my skin and open my pores. Next he slathers a handful of mineral-rich Egyptian clay on my face. In addition to softening my skin, the clay is supposed to remove impurities. Whatever it does, it causes a refreshing, tingling sensation that I will continue to feel for hours after it is removed.

“We didn’t invent this procedure; it actually goes back to the 1920s,” says Gornik, a tall, bespectacled gentleman with white hair. He explains how the treatment first became popular with Wall Street stockbrokers during that era: “They would be out until all hours of the night and not get a lot of rest. So they would come into a barbershop in the morning [on their way to work] and get one of these facials.”

Gornik claims that receiving the 45-minute facial is the equivalent of having an extra two-and-a-half hours of sleep. When I question the scientific validity of the Scientific treatment, Gornik points to my reflection in the mirror and says, “The results are visible right there on your face.” Then he adds that the facial does not cause the puffiness that my face would display if it were pressed against a pillow for 10-plus hours.

Gornik dispenses his wisdom and his services Tuesdays through Saturdays in the modern, walnut-paneled, two-chair barbershop that he opened late last year at Montage Beverly Hills. He works only at the hotel, but the original shop, a six-seat establishment at the intersection of Linden Drive and Wilshire Boulevard in Beverly Hills, remains open. The late Harry Drucker founded the business there in 1936. Rumor has it that Drucker, who died in 1998, enjoyed betting on horses and solicited many of his more famous clients at the track, including Bugsy Siegel. His other regulars included Clark Gable, Tyrone Power, and Ronald Reagan, whose hair Drucker cut every two weeks, even while Reagan was in the White House. Beginning in 1970, Gornik had his own barber’s chair a few blocks away from Drucker’s establishment in Beverly Hills, at the now-defunct Rothschild’s—which, interestingly, was located where Montage now sits. The rivals became partners in 1989, and they changed the name of Drucker’s shop to reflect the partnership.

In addition to haircuts and straight-razor shaves, the Gornik & Drucker barbershop at Montage offers manicures (including a quick cuticle cleanup known as “Handshake Maintenance”), pedicures, shoeshines, and specialty services such as blended-oil scalp treatments and the Scientific Rest Facial. Gornik says the facial, which he learned from Drucker, is especially beneficial for long-distance travelers, because it leaves you feeling refreshed and alert, “even if you’ve just spent a sleepless night on an airplane.”