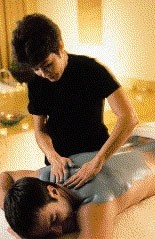 If you haven’t been to a spa lately, you’re in for a surprise. Push open the door and you will enter the men’s grill of the new century—an elegant, relaxed place to recharge after a great morning on the back nine or a rough week in the capital markets. Spas have undergone a phenomenal growth spurt recently: A 2000 PricewaterhouseCoopers study found that the spa industry had increased 127 percent over the preceding three years. And men have fueled much of that expansion, now accounting for 30 percent of spa visits.

Men are switching their massage appointments from the gym to the spa for good reason. The increasing prevalence of Eastern-oriented treatments and aesthetics has created an environment far less feminine than the mauve walls and manicure tables of 10 years ago. While the classic Swedish massage remains a fundamental thing of beauty, many spas also have therapists trained in Shiatsu and deep-tissue massage, as well as state-of-the-art water treatments and centuries-old facial and scrub techniques.

“Most spas have always had treatments for men,” says Mary Bemis, editor-in-chief of American Spa. “But the smart ones are targeting men more effectively.” That means offering sports massages instead of aromatherapy, electronic gadgetry in place of Vogue. “Many men want large-screen TVs in the relaxation area,” says Bemis with a laugh. “I would bolt out the door of a spa if I saw a television, but men unwind in an entirely different way.”

As increasing numbers of luxury hotels add spas to their amenities, a spa treatment has become as convenient for the business traveler as room service. Two recently opened urban oases, Spa Mystique at the Century Plaza Hotel in Los Angeles and Spa at Mandarin Oriental in Miami’s new Mandarin Oriental Hotel, exemplify the new masculine appeal of the spa experience.

At Spa Mystique, a 35,000-square-foot jewel that opened last May, guests enter a serene, Zen-sleek environment of bubbling water, pale wood floors, and Asian antiques. A top-notch fitness center shares space with a meditation garden, a feng shui–inspired salon, and a spa cuisine café. “About a third of our guests are men, and we’re designing more treatments specifically for them,” explains spa director Pamela Gold. “We have sport-specific massages, polish-free pedicures, and a new facial developed for a man’s skin.” Gold says that massages are the most popular offerings at Spa Mystique, “but men are starting to sneak in to get facials. Once they get a taste of a treatment, they want more.”

At Spa at Mandarin Oriental, the philosophy—in keeping with the playful opulence of the hotel—is a mix of ancient and modern, blending European, Ayurvedic, Chinese, Balinese, and Thai therapies into one blissful whole. The spa offers a fitness center, infinity-edge swimming pool, yoga and Pilates classes, and steam and sauna rooms, as well as six private suites. Amid bamboo and rice paper, with the sparkling Biscayne Bay for a backdrop, you can be rewarded for your open-mindedness with an expert Shiatsu massage or the unexpected pleasure of an ayurvedic body treatment. The hour-and-a-quarter experience includes a ritual footbath, scalp massage, mini facial, and pressure-point marma massage. After all that, it would be difficult for almost anyone to resist the spa conversion.