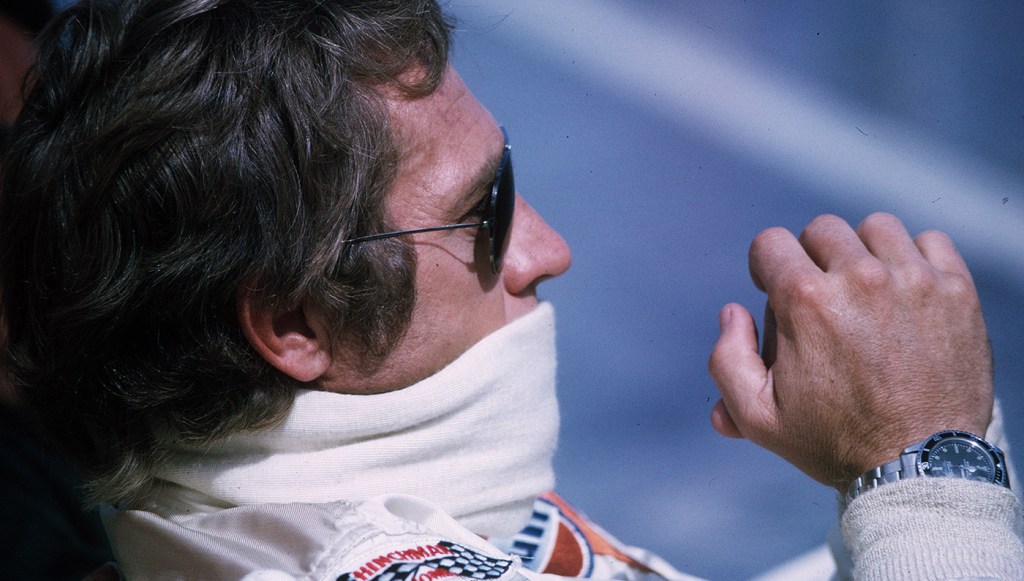 On-screen legend, the late Steve McQueen, set the standard for antihero movie stars of the late 20th century. A motorsports enthusiast of epic proportions both on- and off-screen—amassing a personal fleet of 210 motorcycles, 55 cars, and five airplanes—the American actor proved a major force in fashion, too, and was the first man to land on the cover of Harper’s Bazaar. The following is a nod to McQueen’s effortless style, rebel attitude, and undeniable edge, and presents the six essential pieces you need to emulate the King of Cool.

Steve McQueen famously wore a Tag Heuer Monaco chronograph during his role in the 1971 film Le Mans. But off-screen, his daily choice was the Rolex Submariner. McQueen sported his personal black-dialed, stainless-steel Reference 5512 diver’s watch while racing throughout the 1970s, including in the 12 Hours of Sebring in 1970, and he even wore it in his final film, The Hunter, in 1980. Though production of that exact model ceased in 1978—and McQueen’s own watch­ (worn on his right wrist despite his being left-handed) was sold for $234,000 at a 2009 Antiquorum auction—Rolex continues to release new Submariners today. The most recent model, the Oyster Perpetual Submariner, is waterproof to a depth of 1,000 feet (670 feet deeper than McQueen’s version) and is priced from $7,500. (rolex.com)

McQueen donned Persol sunglasses, in various styles, both in his personal life and on the silver screen. The most famous pair, however, was the foldable, tortoise-framed Persol 714 sunglasses, which he had customized with blue-tinted lenses and wore in Bullitt, The Getaway, and The Thomas Crown Affair.

To pay tribute to the man who made the brand a legacy, the nearly century-old Italian eyewear brand relaunched the iconic style with the Steve McQueen Special Edition. Part of the 714 series, the sunglasses stay true to the original design but feature modern updates, such as a reengineered, folding closure system and polarized crystal lenses. Priced at $415, the handmade shades come with a special leather pouch that holds the collapsed eyewear compactly to fit in a jacket pocket. Available at Sunglass Hut. (persol.com)

In The Thomas Crown Affair (about a self-made billionaire who heists a bank),  McQueen paired his Persol 714s strikingly with a tailored, single-breasted, three-piece suit. Forever immortalized as one of his most memorable looks, the elegant broad-shouldered formal wear was custom made by the celebrated British tailor Douglas Hayward.

Recreate this sophisticated ensemble, or find a silhouette and pattern that best serves your form, with either a made-to-measure or a bespoke suit from Savile Row tailor Dege & Skinner. The 151-year-old company offers three-piece single-breasted or double-breasted suits (from about $6,970) in a wide variety of fine cloths. Allow approximately three months, from the time you are first measured to the delivery of the suit, to achieve the perfect bespoke fit. (dege-skinner.co.uk)

A main staple in Steve McQueen’s wardrobe were his casual knit cardigans. He fancied them with collars (shawl and other styles), in subtle neutrals and classic navy. With effortless style, McQueen would layer his often-unfastened sweaters over denim shirts, dress shirts, and plain tees, and would cuff their sleeves.

Today, the Neapolitan menswear label Isaia offers a contemporary take on the classic style with its cable-patterned cotton cardigan, priced at $600. (isaia.it)

With a need for speed and a passion for motorsports, McQueen often found himself behind the wheel—even doing many of his own stunts—so it is no wonder the driving glove became a classic part of his repertoire. Inspired by and named after the legend himself, the $108 Steve driving gloves by Sweden-based glove maker Hestra are handcrafted in Ethiopian hair-sheep leather and tanned in Naples. For a custom pair, opt for the company’s appointment-only bespoke service, with the gloves priced from about $540. (hestragloves.com)

Fans and moviegoers often spotted McQueen wearing a Saint Christopher gold-chain pendant, whether tucked behind a sweater or displayed openly. (The pendant was a gift from his first wife, actress Neile Adams, as McQueen had become quite religious toward the end of his life.) Recreate the stylish personal piece with David Yurman’s box-chain necklace ($6,300) and a tag with meteorite inlay ($3,000), both in 18-karat gold, for a contemporary take on the men’s medallion necklace. (davidyurman.com)