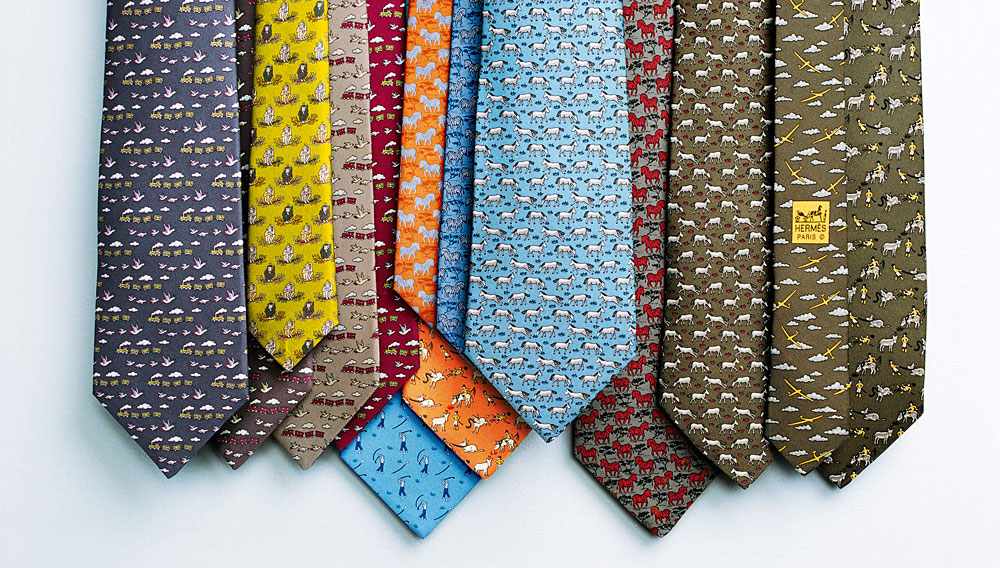 Since 1949, when Henri d’Origny designed the first Hermès necktie, the French luxury brand has produced five-fold silk twill ties made in a kaleidoscope of color combinations that it retires at the end of each year. These neckties, designed exclusively for Hermès and printed in the company’s silk atelier in Lyons, France, all feature serial numbers to help collectors locate out-of-print patterns from previous years, providing they haven’t previously sold out. Currently, the company has logged more than 1,600 distinct necktie patterns in its archives. With the exception of a few limited-edition designs introduced throughout the years, what all Hermès ties have in common are the brand’s small, neat repeat patterns in a proprietary range of colors, as many as 16 hues on a single necktie. Hermès manually mixes its own colors (more than 75,000 variations to date) rather than manipulate shades on a computer to avoid duplicating the colors of other tie makers. Other identifying features of a genuine Hermès tie are a hand-tied fil de montage, or slipknot stitch, down the back of the spine to prove it was handmade and a Cartouche, or driverless horse and carriage, label, which was adopted by third-generation heir Emile-Maurice Hermès from a 19th-century lithograph by French artist Alfred de Dreux.

The first Hermès tie was introduced at the company’s store in Cannes, France, after a neighboring casino refused to allow patrons inside without a necktie. Since then the family-owned company has employed only three neckwear designers: Henri d’Origny, who originated the classic house style featuring horse, hunt, and marine motifs; Philippe Mouquet, known for his whimsical animal prints; and, most recently, Natsuno Hidaka, who specializes in abstracts and geometrics.