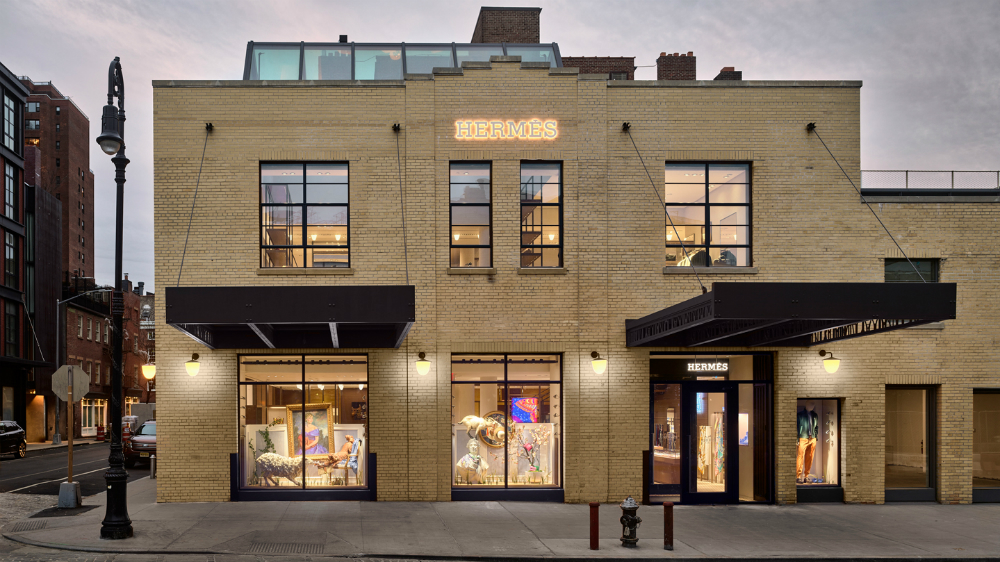 Not even a light rain could dampen the excitement outside of a low, pale brick building in New York City’s Meatpacking District on Friday morning. A group of around 30 people, many of them carrying bags from the French luxury brand Hermès (and a few with umbrellas) had queued up to be the first members of the public inside the company’s newest store, a two-story affair in this corner of downtown Manhattan.

Many expected the store would open at 11 am. At 11:05, with the doors still firmly shut, a chauffeured black GMC Denali pulled up, and its driver asked a reporter when the shop was expected to open. A young man wearing gym gear, pink Nike Epic Flyknit React running shoes and a camouflage backpack from Saint Laurent rounded the corner of Greenwich and Gansevoort streets and announced to a friend on the phone that a line had formed. Just as a group of young women got out of a Cadillac and stepped into the line, a man in a green Patagonia puffer jacket walked by and asked if there was a sale going on that he hadn’t heard about. A woman at the head of the line said plainly, “It never goes on sale.”

The scene was all the more noteworthy because, while Hermès takes all comers, those who can pay the premium to shop at its boutiques rarely have to get in line to do so. On this drizzly Friday morning, the wait was worth it. Just past the vestibule at this new store lay a mini-wonderland of the brand’s wares, with all 15 of the house’s métiers represented despite a relatively modest 5,330 square-foot layout. After apologizing for the delay, an Hermès spokeswoman offered a tour of the space.

All 15 of the house’s métiers are represented in Hermès new Meatpacking District store.  Frank Oudeman ©OTTO

So, what does it look like when a former photo studio (where vaunted talents like Annie Leibovitz and Steven Meisel once worked) is transformed into a store?

Broadly speaking, it’s brighter, more intimate and more colorful than the imposing brand of grandeur shoppers can encounter at many a luxury boutique. The walls reflect the limestone brick outside with long stretches silver-grey cherry wood paneling. The same tile mosaic that’s underfoot at the brand’s original store on the Rue du Faubourg Saint-Honoré in Paris is used here, too. But instead of separating the various departments with full-height walls, RDAI architect and designer Denis Montel—who oversaw the renovation—left things a little more open. It’s what allows for a near-seamless transition from the scarf displays near the entrance of the store to an area where the house’s coveted leather goods are on offer. If you’ve been in another Hermès boutique recently, you’ll know how rare it is to see a wallet or handbag outside of a vitrine. At this store, a selection is laid on tables for you to reach out and touch. Afterward, you can even have a coffee in the back of the store.

At the back of the first floor, there’s a table where guests can enjoy a cup of coffee.  Frank Oudeman ©OTTO

Upstairs, visitors will find home goods, as well as men’s and women’s ready-to-wear and shoes; there’s a windowed dressing room whose privacy screen can be drawn back to let in some natural light—the better to see what your new jacket will look like in the real world. Sprinkled throughout, there’s a selection of unique products, like boxing gloves and a record player from Hermès’s Horizon department. Underneath the staircase on the first level, there are four products made specifically for this location: a backpack, a hip pack, a bicycle and a skateboard bag offered in a special-edition cosmos leather. Think of it as a nod to the interplay of high and low that’s always been a component of Manhattan’s DNA, and feels especially present in this neighborhood.

Hermès joins a litany of stores, covering every inch of the shopping spectrum, in the retail colonization that’s happened in the Meatpacking District recently. From many of the space’s large windows you can see the cruise ship-sized Restoration Hardware store on Ninth Avenue; Marni, Vitra and Bond No. 9 aren’t far away. Farther west on Gansevoort, there’s even a Madewell, that much-loved offshoot of J.Crew. The discount-hunting gentleman in the Patagonia jacket must have been headed there before the Hermès store opened. When the tour concluded, he was spotted downstairs examining the scarf selection, with a bag from the lower-priced store in tow. Premium be damned.