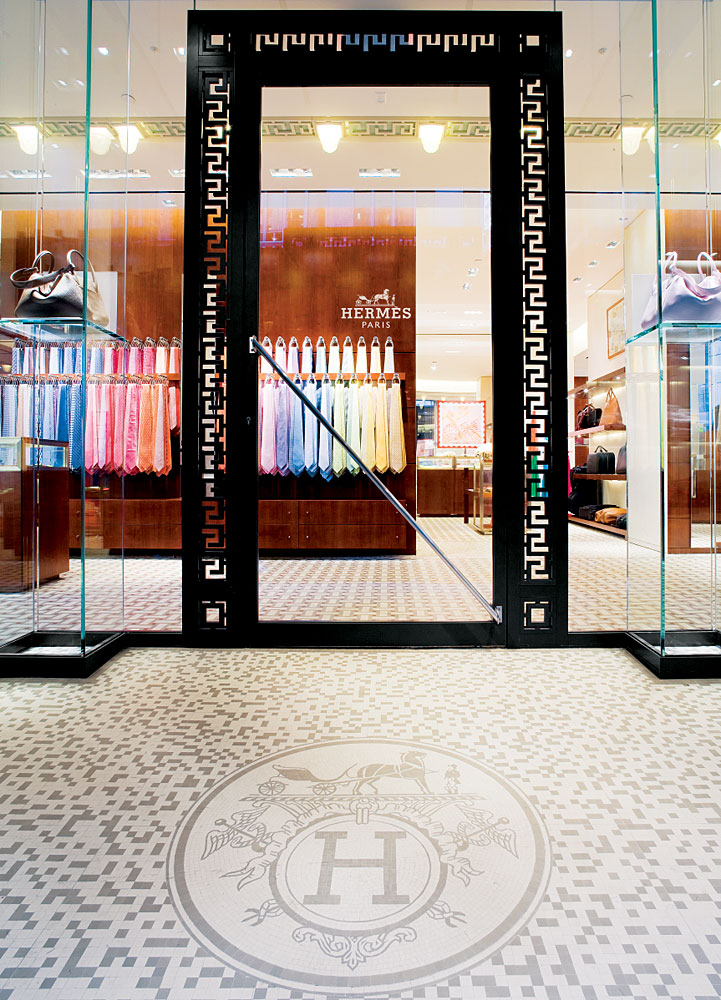 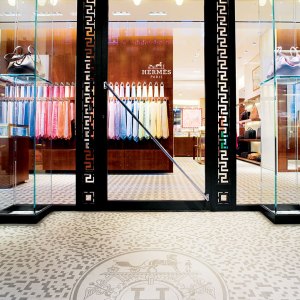 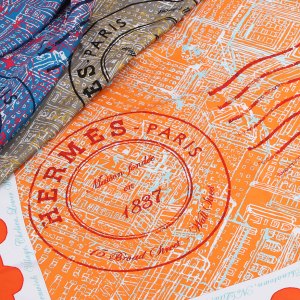 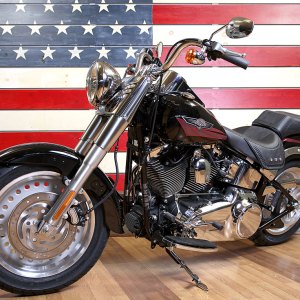 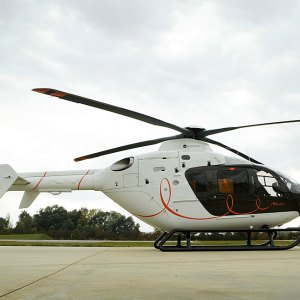 When Thierry Hermès opened his saddle shop in 1837, in Paris, the cobblestoned streets rang with the clip-clop of horses’ hooves. Today, the window of the brand’s recently opened Broad Street store, located across the street from the New York Stock Exchange, showcases an example of 21st-century horsepower: a customized Harley-Davidson motorcycle. The one-of-a-kind bike, priced at about $50,000, is outfitted with a seat, saddlebags, and handgrips, all made of saddle-stitched buffalo leather. The display is intended to reflect the company’s equestrian heritage while, at the same time, enticing the area’s predominantly male audience to step inside the shop. To further promote the brand and its masculine image,

Hermès made the one-of-a-kind motorcycle and helicopter for its own purposes, but over the past 170 years, the family-owned company has fulfilled a broad range of commissions for its clients. These have included a crocodile travel bar (made for Sammy Davis Jr.), a red leather interior for an Aston Martin, and the white goatskin–covered interior walls of a Paris apartment designed by Jean-Michel Frank. A separate division, Hermès Gainier, fulfills the custom orders. “We have a client in Chicago who wanted her library walls covered in Hermès leather, and we did them for her,” says Robert Chavez, Hermès USA president and chief executive officer. “People ask us to customize the interiors of their cars or their yachts. Because this division exists, one of the many custom opportunities that recently came up was the helicopter.”

For its l’Hélicoptère par Hermès, the company partnered with Eurocopter and redesigned the helicopter manufacturer’s popular EC 135 business model, instead of retrofitting an existing helicopter with a leather interior. The futuristic design features upholstered calf leather seats and banquettes covered with Hermès Toile H canvas. The exterior is accented with the brand’s familiar brown and orange colors. “The aircraft has been completely redesigned, from the landing gear and door handles, which are more rounded and aesthet­ically pleasing, to the modification of the cockpit and the four VIP seats in the back,” explains Laurence Rigolini, a corporate vice president at Eurocopter. “Typically, when you’re buying a helicopter, you spend a lot of time choosing the body and the interior. In this case, we worked with the designers from Hermès who did all the work for you.” The helicopter, priced at more than $8 million, will be put into limited production (one every two months) this year.

The helicopter is an extraordinary example of Hermès’ diverse offerings, which also include porcelain tableware, watches, and a line of furniture designed by Greek-born architect Rena Dumas, wife of retired Hermès chairman and chief executive Jean-Louis Dumas. Still, the brand is most famous for produc­­ing leather goods, using the finest Freu­denberg calf hides and other exot­­ic skins made at the Hermès-owned Gordon-Choisy tannery in Montereau-faut-Yonne, France.

Hermès’ independence gives it the ability to expand into such eclectic fields. It is one of the few established luxury brands that was not acquired by conglomerates during the late 1990s, and unlike most of its peers, it is not encumbered by heavy debt.

The success of its colorful, collectible scarves, the long waiting lists for its Kelly and Birkin handbags, and its Jean Paul Gaultier–designed women’s ready-to-wear clothing lead many to consider Hermès a women’s brand. But nearly half of the company’s estimated $4 billion in annual sales are attributed to men’s items.

The Broad Street store served as an impetus for Hermès to expand its men’s offerings. In addition to an extensive range of ready-made belts, shoes, wallets, briefcases, and day planners, the company introduced men’s saddle-stitched leather bags and a $44,000 crocodile briefcase. Also, to mark the store opening, Hermès released a Bulls and Bears necktie that depicts one of those animals on each side and can be worn in accordance with the state of the stock market. And its watchmaking division produced 10 rose gold Wall Street–edition Cape Cod watches.

Also new to the United States is sur-mesure (bespoke) and demi-mesure (made-to-measure) tailored clothing, which has been available at the Paris flagship since 1994. Hermès now offers the service at its Madison Avenue and Broad Street stores and will add it to the Beverly Hills store this spring.

“Obviously the Faubourg store has well-developed sur-mesure and demi-mesure businesses, but we weren’t quite ready for made-to-measure in the U.S. because we needed to focus on building a clientele for the prêt-à-porter [ready-to-wear] aspect of our business first,” explains Chavez, who says that the Madison Avenue shop was used as a testing ground, “to get the kinks out” before offering made-to-measure on Wall Street. He points out that you can customize your suit in unique ways. “If your wife has a favorite Hermès scarf pattern, or there is a special color or design you like, we can line your suit with that color or pattern, or we can create a matching vest with the back made of the scarf fabric,” says Chavez, noting that Hermès’ silk atelier in Lyon, France, retains all of its tie and scarf designs—more than 3,100?total. The price of an Hermès demi-mesure garment starts at about $4,500, compared to the $2,500 opening price for a ready-made suit. A sur-mesure suit can cost as much as $30,000, depending on the fabric and amount of customization.

The company’s leather goods, silk scarves, and neckties long have overshadowed its ready-to-wear apparel. “We are victims of outside views; men sometimes think we are just a tie company,” says Véronique Nichanian, who has been designing Hermès’ men’s ready-to-wear collection since 1988, when she was hired by fifth-generation Hermès heir Jean-Louis Dumas (who retired as chairman in 2006).  “I took it as a challenge to see if my designs could stand up to time like the Kelly bag,” adds Nichanian, who now works with Dumas’ son, Pierre-Alexis Dumas, and his niece, Pascale Mussard. They serve as Hermès’ artistic codirectors.

Hermès accessories are available at in-store boutiques in Richards of Greenwich, Bergdorf Goodman Men in New York, and some Neiman Marcus stores. Its ready-made menswear is sold only at the company’s stores, of which it owns 244 worldwide. Hermès plans to open new stores in San Diego, Las Vegas, and Denver this year, and in Seattle and Scottsdale, Ariz., in 2009.

Nichanian prefers to use the word timeless instead of classic when describing the style of an Hermès patron. “The difference is that classic can be boring,” says Nichanian, whose latest spring collection includes India-influenced madras and seersucker slacks and jackets, sheer cotton shirts, and plunging V-neck sweaters. “I’m trying to build a style, not do something different from season to season,” she says. “A man’s clothing should mix together in a seamless manner with things that he’s purchased from previous seasons.”

Throughout her two decades at Hermès, a brand that was the first to add zippers to handbags and outerwear and that introduced the square-cut silk scarf, Nichanian has demonstrated her own innovative inclinations. In addition to incorporating neoprene, which is typically used for wet suits, in one of her earliest collections, Nichanian was among the first designers to experiment with matte finishes on crocodile and alligator. “When I first proposed the idea for a matte crocodile waistcoat, the leather craftsmen told me it couldn’t be done,” she recalls. “But they did it for me, and now everyone does matte finishing. People sometimes think of this house as old and rigid, but it’s actually quite energetic.”

Hermès has given Nichanian and Jean Paul Gaultier, who designs the women’s ready-to-wear collection, full access to the firm’s archives and the museum that contains them. The brand’s executives call the museum “the secret garden of Hermès.” It is located in Paris, in the former offices of Émile-Maurice Hermès, the company’s third chairman. He started the archives in the 1920s. The museum, which is open to VIP clients by appointment, features a secret faux-book-covered door that allowed émile to escape undetected when salesmen came calling. The facility houses 18,000 objects—including pieces produced by Hermès and some non-Hermès pieces that museum director Ménéhould de Bazelaire deemed artful and inspirational. The holdings include an 18th-century leather trunk, made for a French soldier, that incorporates a pullout bed and a head form to store one’s wig; a mahogany and red leather men’s home valet created in 1936 by Hermès in collaboration with French architect and interior designer Paul Dupré-Lafon; a green leather box in the shape of an apple to store, of course, an apple; and a lunette de jalousie, a monocular that offers a sideways view, so that one could observe, from across the theater, a spouse suspected of being unfaithful.

When Nichanian first joined Her­mès, she spent a great deal of time in the archives, studying the unique stitching on an 18th-century shagreen box so that she could reproduce it on a blue stingray vest for one of her first collections. Although she rarely visits the vaults now, Gaultier, on the other hand, “loves to take energy and inspiration from the past, so he spends a lot of time here,” says de Bazelaire. She explains that Gaultier based many of his form-fitting fashions on a black satin equestrian outfit that belongs to the museum and once was owned by Julie Hermès, wife of Èmile. Like all Hermès creations, says de Bazelaire, “these objects are made with a great deal of intelligence so that in the future, when they are no longer useful, one can still see the poetry and beauty in them.”

One day, the Hermès motorcycle and helicopter may be added to the museum’s exhibits—in company with a leather-covered wheelbarrow commissioned in 1946 by Edward VIII, the Duke of Windsor, for his wife, Wallis Simpson. “The Duke came into the Paris shop one week before her birthday looking for a gift, and the saleswoman suggested gloves and perfume,” explains de Bazelaire. “To that he replied, ‘No, she has wheelbarrows full of those things.’ So the saleswoman suggested they create a small wheelbarrow to store them.”