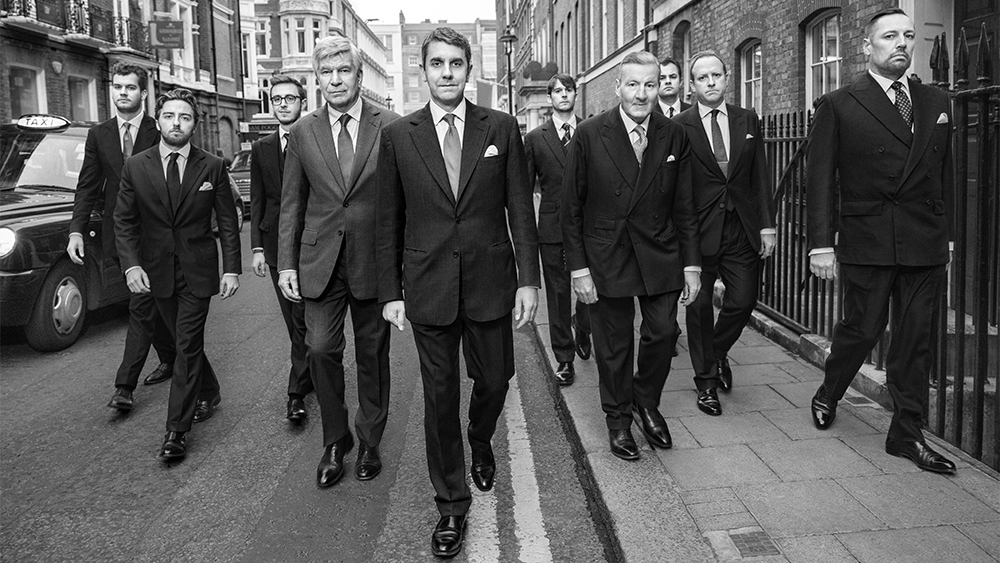 It’s no secret that Savile Row has been in a precarious situation for several years. Changing tastes and rising rents have revealed cracks in the bastion of tailored menswear. Now that Covid-19 is reshaping the world as we know it, those cracks could prove fatal. Yet, in a typically stoic, stiff-upper-lip British way, Savile Row remains surprisingly sanguine. It’s still operating to the best of its abilities, despite the circumstances, and is readying the broadside to come out of this all guns blazing. Now more than ever, we need to rally behind it.

The prevailing issue on Savile Row has always been business rates, such as property taxes and rents imposed by a handful of landlords. According to Anda Rowland, Director of Anderson & Sheppard, the landlords “don’t take into account bespoke tailoring’s relatively low margins.” It’s an opinion shared by Simon Cundey, Managing Director of Henry Poole, who says the landlords “set a precedent for us with these rates and it’s scary as hell. Even before this situation, we were thinking ‘What on Earth is this?’ and we could see some businesses pulling out.” Both companies have the largest workforces on The Row—31 for Anderson & Sheppard and 45 for Poole. If they’re finding it difficult, it should give some indication of how the smaller houses are faring.

To make matters worse, it’s an increasingly challenging time for all British businesses as the US increased tariffs on exports by 25 percent last year. Furthermore, with the continuous relaxing of corporate dress codes (Goldman Sachs now simply asks employees to “exercise good judgment” each morning before coming to work), there’s less need for an expansive wardrobe of suits for work. This should merely mean that tailoring businesses must evolve and adapt to changing needs, but sadly some didn’t receive the memo.

Last year Savile Row’s Hardy Amies and Chester Barrie both closed down for a mixture of reasons, including financial hardships, creative differences and an inability to get in sync with the times. A heavier-hitting blow was issued earlier this year, though, with the announcement that Kilgour was closing. “It’s horrible. It’s absolutely horrible,” reflects Cundey on the house that’s contributed to the allure of The Row since 1880. That’s brought the tally up to 13 empty shops on Savile Row—a street not much longer than 500 feet. Landlords shouldn’t be blamed entirely, but the rates are largely considered unsustainable for craft businesses and give little incentive for newer, more agile houses to set up shop.

Unsurprisingly, social distancing measures and government protocol resulted in shops closing and trunk shows being canceled or postponed. However, it’s not all doom and gloom as Savile Row is still fulfilling orders, to a degree. “Production hasn’t been affected and is still ongoing and we remain in daily contact with the team,” Richard Anderson says of his eponymous house. It’s the same situation at Norton & Sons, where director Patrick Grant says that they’ve “closed the store for the first time in over half a century, but our sewing tailors are still working from improvised workrooms in their homes.” Nimble as this setup is, it has its limits. Since the teams can only work up to a basted fitting, the final product will still have to wait until social distancing measures ease up. And, naturally, new clients can’t be fit. But if you’re an existing customer, you can support your tailor by placing an order. At the very least, it’s promising that there’s still work to be done for these skilled craftspeople—many of whom are self-employed, independent contractors.

At Cad & The Dandy and Huntsman, it’s a different situation, as both have been contributing to the Covid-19 effort by producing PPE equipment. James Sleater, owner of Cad, tells us they’ve received innumerable requests from hospices, ICU nurses and general practitioners in desperate need of medical apparel. “We have 12 coat-makers making about 150 scrubs a day,” he informs us. Not only is this noble work but it boosts the in-house morale. It’s also a small step in galvanizing The Row together, which is vital for their collective well-being. As Sleater puts it, if Savile Row aims to survive it will have to be through “strength in numbers.”

With The Row’s business owners now at home, they’ve been alleviated of their usual hectic days and can look ahead. Henry Poole is working on releasing an entirely new concept that will diversify its collection with additions unlike anything else in its plus-200-year history. “We are broadening the offering with a different type of soft canvassing that gets you to the Neapolitan type of lightness. You still get the Poole silhouette, just without the weight. It’s totally different,” says Cundey. Meanwhile, Richard Anderson says that “this period has given us the time to think about new designs for autumn; where our signature safari jacket has been reworked from a never-before-seen Prince of Wales check fabric.”

On the home turf, change was already afoot before the pandemic. Last year, Drake’s opened a new store on The Row and J.P. Hackett moved into the old Hardy Amies building. “They were the best candidate to take over. It’s a full maison,” Cundey notes of Hackett’s new vision. Ciffonelli also planted its tricolor flag around the corner, and Thom Sweeney is on track to open a 3,100 square foot bespoke and ready-to-wear store in the autumn, complete with a barbershop and cocktail bar. All of these names have a clearly defined aesthetic and engaged clientele, which will no doubt help draw people to The Row even more.

Menswear stylist and journalist Tom Stubbs was recently appointed as Savile Row Attaché by The Pollen Estate, the largest landlord in the area, who’ve given him the keys to 31 Savile Row and tasked him with injecting the street with new energy. “I’m calling it a creative atelier,” he says of the new space, and he’s working on several ideas—exhibitions, pop-ups, events, you name it—to help diversify The Row and increase its appeal. “We need to get some interesting stuff in there, and that’s what I am going to do.” Top of his list is rehousing Kilgour, saying “We must keep that bloodline going.” He’s also going to house Dobrik & Lawton, a new tailoring house with razor-sharp lines and a healthy amount of attitude and he’s in talks with Bianca Saunders, a rising star in the next generation of young British designers. With 25 brands in total (which aren’t exclusively British) on his list, everything he’s planning will nod towards The Row’s tradition but with a distinctly contemporary approach.

Regenerating The Row doesn’t end with new tailors and brands, as Stubbs is working on bringing food and drink into the equation. It’s an aim shared by his peers: “It needs to be fun! We need to have a great bar that serves coffee in the morning and cocktails in the evening. We need a barbershop or a proper newsagent,” says Rowland. Sleater agrees: “Savile Row needs an offering of lifestyle entertainment,” noting nearby Mount Street’s success in marketing a street with inviting bars with outdoor seating and floral displays.

When it comes to London’s tailoring scene, so long as it survives the storm of Covid-19, it seems that there’s plenty to be excited about in the near future. The crisis will, however, change our attitudes towards everything from how we consume to what we consume. “I think people will value craft and localism more than ever before in a post-coronavirus world,” says Grant. The current situation is teaching us to value and cherish the things that may have previously taken for granted, and many of those things can be found on The Row. All we need to do is show up.