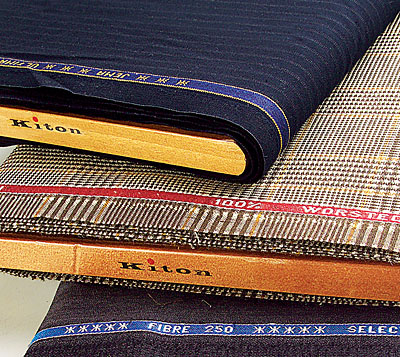 During a group visit to Kiton’s Naples, Italy, factory in 2001, one of the guests questioned whether the suit being shown was among the world’s finest. Company founder and president Ciro Paone rose from his chair and, with an air of indignation, pointed across the room at the offender before launching into a testimonial for the garment.

He explained that the suit requires 25 hours of hand labor because of the delicacy of the superfine wool fabric—a cloth composed of fiber measuring 15 microns, or about one-fifth the diameter of human hair. Such fine cloth, he said, would crimp and crumble if forced under the needle of a sewing machine. He then ticked off the hand-sewn details of a typical Kiton suit: sleeves that are attached to an unusually small, high armhole; the fine irregular stitching around the buttonholes; the high notch on the lapel that no machine can produce; the slight curve on the chest pocket held in place by two sideways, V-shaped “mosquito” stitches; and the way the canvas inner lining is loosely attached to the interior body so the suit does not wrinkle as the cloth compresses. “Questo è poesia, certo!”(This is poetry, for certain!) he declared.

“Quality needs a lot of attention, a lot of love, and control,” Paone continued. To illustrate his point, he set aside the 25-hour suit and retrieved from the closet the brand’s first K50 model—so named because it requires 50 hours to produce, twice as much time as a typical Kiton off-the-rack suit. The K50 is made to order by a single master tailor, Enzo D’Orsi, who is so skilled that he does not need to use a pattern; he simply chalks the fabric according to the client’s measurements and begins cutting. Annually, Kiton offers fewer than 50 of these suits, which is the limit of D’Orsi’s production capacity. Such exclusivity is impressive, but Paone maintained that the collection is further distinguished because it employs the world’s rarest fabrics, including superfine merino wool, baby cashmere, and vicuña. Today, the K50 collection remains Kiton’s top-of-the-line bespoke offering.

Kiton has been making suits since 1968, when Paone, a former fabric salesman, established the brand with three of Italy’s most prominent tailors: Cesare Attolini and brothers Enrico and Corrado Isaia. Creative differences resulted in Paone buying out his partners a short time later, and a competitive rivalry ensued, as each has spent the past 40 years trying to top the others’ sartorial accomplishments. Over the decades, Paone concentrated on refining the craft of hand tailoring, which, he contends, Savile Row tailors, as well as such brands as Oxxford Clothes and Brioni, have abandoned for the economic incentives of mass production.

In recent years, Paone has applied his standards to dress shirts, outerwear, jeans, and bespoke footwear. He contends that if you wear a handmade suit, you should not sacrifice quality when selecting sportswear and accessories. To maintain control over the quality of these other wardrobe items, Kiton acquired factories—including Wonderland, in Parma, Italy, where the company produces its outerwear—and hired master shirtmakers and cobblers to work in its  expanded Naples facility.

Nevertheless, tailored clothing remains Kiton’s forte. In a fashion realm that marks change in millimeters, fabrics are the lingua franca for telling a new style story each season. Every premium suitmaker differentiates itself by offering proprietary cloths, but Kiton is the only manufacturer that works with fabric mills to develop nearly all of the fiber blends and complex weaves used for its suits. Paone, who suffered a debilitating stroke last summer but still visits the factory every day, is known to carry in his pocket swatches of fine fabrics, including rare hybrids of cashmere/linen, cashmere/silk, and Super 210 wool, which is made from fiber measuring 12.9 microns.

Paone’s ancestors, who were from Naples, also purchased cloth in England and Scotland, as long ago as the mid-1800s. They sold the materials to Italian tailors, many of whom eventually emigrated to Argentina and continued to purchase their materials from the Paone family, which had expanded into an international business. By the turn of the 20th century, the Paones were operating fabric shops in Naples, where Ciro later began his sales career catering to the local tailors.

When, in the 1950s, suitmakers adopted machinery that facilitated the speedy manufacturing of ready-made clothing, Paone noticed that his master-tailor clients had begun purchasing less-expensive cloth to remain competitive. According to Bizzocchi, Paone told these tailors that if they worked for him, he would supply them with the finest materials so they could continue producing premium-quality garments by hand. With this plan, Paone laid the foundation for Kiton. Naturally, Paone sought to distinguish his brand further with original and exclusive fabrics. “Ciro Paone is the only one I know who, 15 years ago, was talking about micron counts instead of referring to fabrics as Super 100s and Super 120s, because he knew that the micron is the only real measurement of fabric that counts,” says Bizzocchi, explaining that the lower the micron number is, the finer the finished cloth will be. “He was the first to show lightweight cloth made from superfine 15-, 14-, and 13-micron wool, and now he is offering 12.8-micron fabrics.”

Paone was undeterred by the conventional wisdom that such ultrafine materials were too delicate for the rigorous demands of tailored clothing. Under his direction, Kiton developed several exclusive and extremely limited fabrics. One of those materials, conceived in the late 1990s, was called 360 because it blended Super 180s wool with Super 180s cashmere. The company offered it only through Neiman Marcus because the quantity was so limited. About the same time, Kiton introduced 14-Micron, a four-ply wool fabric made from 14-micron fiber that continues to be a best seller because it looks and feels like cashmere but, like wool, keeps you warm in winter and cool in summer and resists wrinkles. In 2001, Kiton was among the first to offer lightweight wool woven from rare merino fiber measuring a mere 13.2 microns, about the same size as vicuña, a fiber from a South American animal that was an endangered species at the time. That cloth was so scarce that Kiton could produce only 45 suits. A year later, the company produced 20 suits from a limited supply of cloth made from sheep’s wool measuring less than 12.8 microns. Kiton will surpass that benchmark this spring with a new cloth made from wool fiber measuring only 11.5 microns.

These delicate and rare fabrics, which can cost as much as $4,000 per yard, are extremely difficult to work with and demand the skills of only the most accomplished tailors, which explains why suits made from them can command as much as $40,000.

Paone prefers lightweight fabrics for both summer and winter suits because they naturally conform to the body and are more comfortable than heavier materials. For spring, the company offers sport coats made from 65 percent cashmere and 35 percent linen, an unusual combination of winter- and summer-weight fibers that provides the lightness and soft hand of cashmere, which tempers the wrinkles associated with the pure linen. Cashmere also figures prominently in a range of sport jackets weighing from about 5.6 to 10.5 ounces. “Depending on the climate, a man can choose the cashmere weight that is right for him,” says Bizzocchi. He adds that Kiton prefers to make sport coats, whether for winter or summer wear, from fine-gauge cashmere, because the cloth absorbs dyes differently from wool, creating a more colorful mélange.

This spring, Kiton also will produce a limited number of $34,000 suits made from a rare blend of 93 percent vicuña and 7 percent silk. A jacket constructed from this material weighs less than 10 ounces, which is comparable to the weight of two silk scarves.

Even the doubter at Kiton headquarters six years ago was duly impressed that day as Paone explained that every cloth—from summer-weight linens to winter-weight cashmere blends—is washed in cold water and naturally dried between sheets of cardboard before it is made into a Kiton suit. The 200-year-old process, which few cloth- and suitmakers use today, retains the fiber’s natural oils that machine drying destroys. For Paone, perfection may be in the details, but, in his words, “fabric is what gives soul to the suit.”