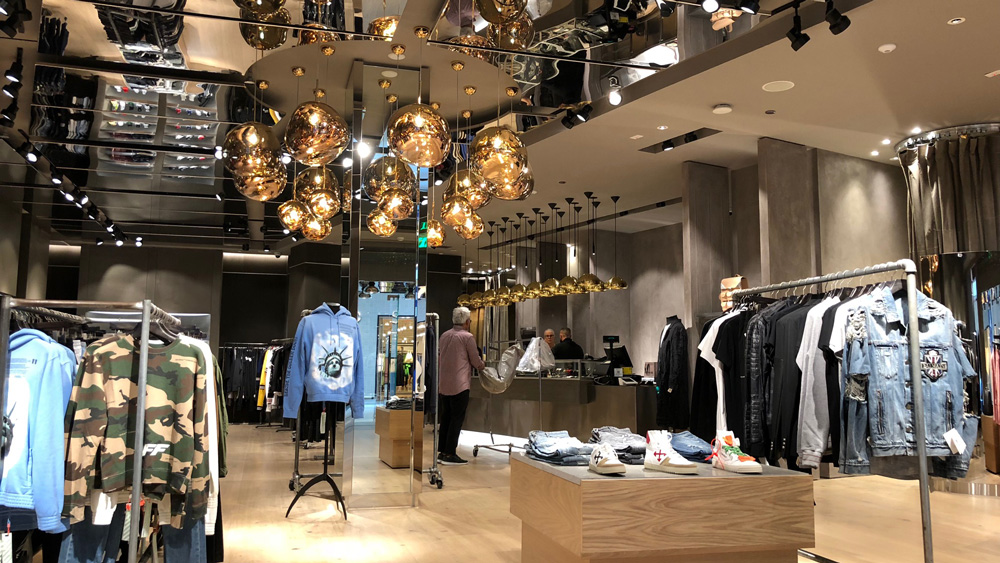 With its gleaming stainless-steel facade and racks of designer menswear, Traffic Los Angeles’s sleek new store inside the Beverly Center looks—to the uninitiated—like an exceptionally stylish, exactingly curated boutique. And while that casual shopper certainly wouldn’t be wrong, Traffic is far more than your standard luxury retailer. When it comes to fashion on the West Coast, you’d be hard-pressed to find a store more influential.

Founded in 1977 by Michael and Sara Moldovan, Traffic has long been at the cutting edge of retail. They outfitted clients in the likes of Dolce & Gabbana, Alexander McQueen, and Paul Smith long before the brands became household names, working closely with the Hollywood set to become a go-to for everything from bold red-carpet dressing to elevated daywear. In 1984 the Moldovans made the jump from Hollywood Boulevard to the Beverly Center, which, at the time, was one of the most opulent malls in the country. Over three decades later, Traffic is the center’s longest-standing storefront—and, with its new 6,000-square-foot, Tom Dixon­–designed digs, is a bastion of the future of brick-and-mortar.

“We worked hard to preserve our DNA,” explains Sara as she walks through the new store, pointing out features like Traffic’s signature polished concrete floors, now elevated with Tom Dixon’s iconic undulating pendant lights, plush corrugated leather walls, and curved dressing rooms lined with suede. Mirrorlike stainless-steel panels all made by a single artisan line the ceiling, reflecting the racks of menswear from the likes of Off-White, Comme des Garçons, and Dsquared2 below. “True fashion lovers still enjoy a visually stimulating, colorful, and tactile experience,” she says. “You just can’t get that same feeling shopping online.”

What you also can’t get online is the sense of discovery that Sara and Michael have carefully cultivated over their 40-plus years in business. “We want men to feel like they are finding collections that are interesting and exceptional,” she adds. To that end, the Moldovans put their exceptional taste to work—scouring the market for pieces from up-and-coming brands. Current favorites include Garcons Infideles, a punky, glam-rock-inspired Parisian brand founded by the son of Paul & Joe designer Sophie Albou. “We used to sell shirts from [Ablou’s father],” explains Michael, “so it’s fun to have what really is the third generation in the store now.” Other popular newcomers include a host of streetwear-inspired brands like Korean label Juun.J (whose bold red bomber jacket with detachable vest has been flying off the shelves) and England­-based Represent.

Traffic also stocks its share of more established names—think Haider Ackermann, Balmain, Raf Simmons, and Thom Browne—but its selection is often unique. The store carries limited quantities of everything, not only to ensure that clients like Pharrell and John Legend don’t show up wearing the same brocade Dolce & Gabbana blouson to that week’s big soiree, but also because it is often the only store in the world to order certain runway pieces. “We’ll do anything it takes to make the customer happy,” Michael explains, “but sometimes we just can’t get our hands on these pieces again because we were the only ones that bought them.”

And often that exclusivity is exactly what keeps clients coming back to Traffic. They may not be able to get their hands on that same exquisite metallic blazer they saw on Instagram, but they are sure to find something just as covetable. “It’s like wine tasting,” laughs Sara. “We have just feel what we like and what to buy.” For now, that includes a dressed-down mix of collectible sneakers, upscale denim, and bold jackets—a quintessentially West Coast look that the store helped pioneer years ago. It’s something that, like Traffic, isn’t going anywhere anytime soon.