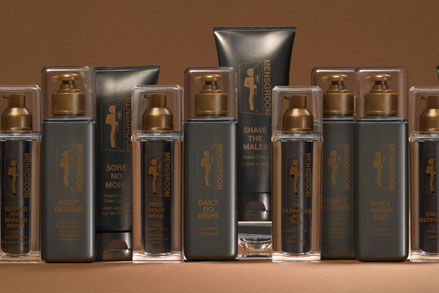 In 1903, German drugstore owner Hans Schwarzkopf created a special powder formula that became the world’s first shampoo. It would be another 24 years before the same inventor would create the liquid version used by the world today. Now Schwarzkopf’s grandson, Gerd Schwarzkopf, has created Mensgroom, a complete collection of men’s toiletries designed for those not inclined to spend more than a minute longer than necessary in the bathroom. Naturally “the length of that minute depends on which side of the bathroom door you’re on,” says Schwarzkopf, a 60-year veteran of the hair-care industry whose wry sense of humor is evident in each of the 16 products, priced from $20 to $45. Firmly Rooted shampoo, for instance, is made from birch sap and marsipium tree bark and designed for receding hair lines. Soothe the Shaven Beast after-shave balm incorporates mannetake mushroom and green pea extract to combat the agony of razor burn. When in doubt about a product’s purpose, the company’s logo and helpful mascot, Washroom Guy, the international male symbol used on men’s bathrooms, stands at the ready on the company’s Web site to answer all grooming questions. Every product also comes with a cartoon illustration of its use on the inside box flap “for guys who like pictures more than words,” Schwarzkopf explains. (800.859.3029, www.mens-groom.com)