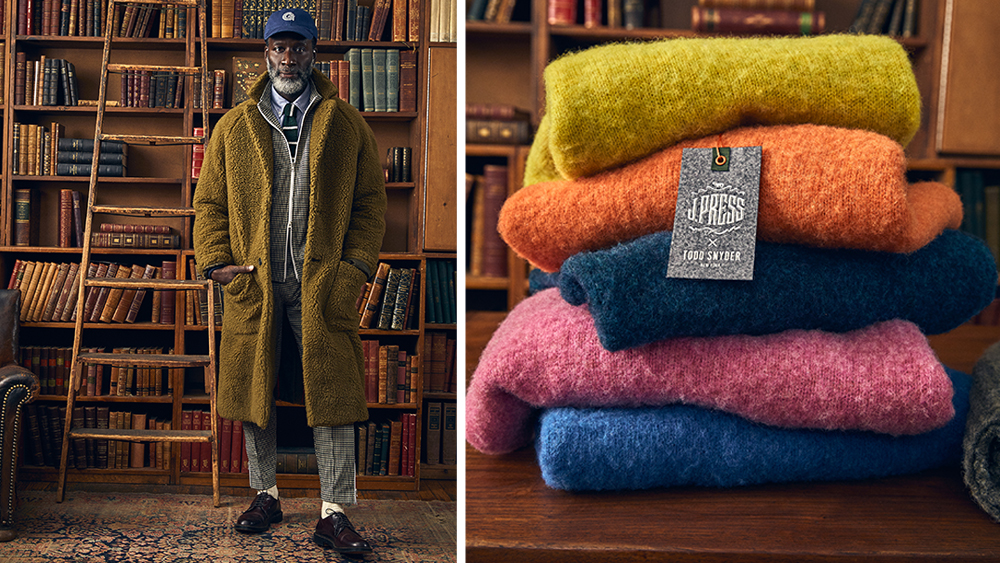 Hot on the heels of his second collection with L.L. Bean, Todd Snyder has applied his touch to another American brand with a century-plus history. This time it’s Ivy style-originator J. Press, whose signature items—including the sack suit, the duffel coat and the Shaggy Dog sweater—have changed little since the Kennedy administration but are getting a very 2021 update courtesy of the New York-based designer.

“To me, J. Press is one of those brands that will never go out of style,” Snyder tells Robb Report. “Not only were they one of the creators of the classic Ivy League look, but the quality of their products is unmatched. It’s the kind of brand that is passed down from one generation to the next, but at the same time is a bit under the radar, so I’m excited to hopefully broaden awareness of an under-appreciated American icon.”

Snyder, who approached J. Press with the idea to collaborate and was given access to the label’s catalog archives, designed a collection of 38 pieces representing “Snyder-ized” takes on J. Press originals. For instance, the iconic Shaggy Dog sweater, named for the distinctive texture of its brushed Shetland wool, turns up in tones like pistachio or granite rather than the expected preppy pastels; the sack suit gets a more modern fit and ditches gray flannel in favor of a bold check tweed or crimson boating stripe; and the duffel coat embraces an orange-infused camouflage.

While the cuts and colors may differ, the foundations remain unmistakably J. Press. “Every item still has at least one element of our DNA, whether it be silhouette or fabric, so it feels close to our ethos as a brand,” says J. Press merchandising director Robert Squillaro. “Todd obviously appreciates the history of J. Press and wanted to stay true to the brand.”

However, the influence goes both ways: the collection also includes typically Todd Snyder pieces with a J. Press twist, like chore coats in a black-and-white herringbone Harris Tweed. It also taps into Snyder’s long love affair with athletic apparel by featuring sweaters with varsity-style chenille patches and J. Press’s bulldog mascot throughout.

“We both share an appreciation for sharp tailoring, quality materials and all-American style,” Snyder says of the shared affinity between the brands. “This is one of the most luxe collaborations I’ve worked on because I wanted to make sure it felt super special and reflected J. Press’ unparalleled history. I’ve also long been inspired by men like Frank Sinatra and Cary Grant, who were both J. Press fans, so it felt like a natural fit.”

The collection goes live online at 11 a.m. ET on Friday, November 19, and will also be available at Todd Snyder’s New York City flagship store on Madison Square Park; select pieces from the collection will also be sold by J. Press online and in-store.

The collaboration is considered to be a one-off for the time being, although Squillaro expresses a desire for a second team-up should reception to the first prove positive. For his part, Snyder imagines that a hypothetical round two might include a modernized version of the classic varsity jacket.

For now, admirers of the timeless collegiate style embodied by J. Press or the downtown-modern aesthetic of Todd Snyder can appreciate that both, if even for a brief moment, will intersect.