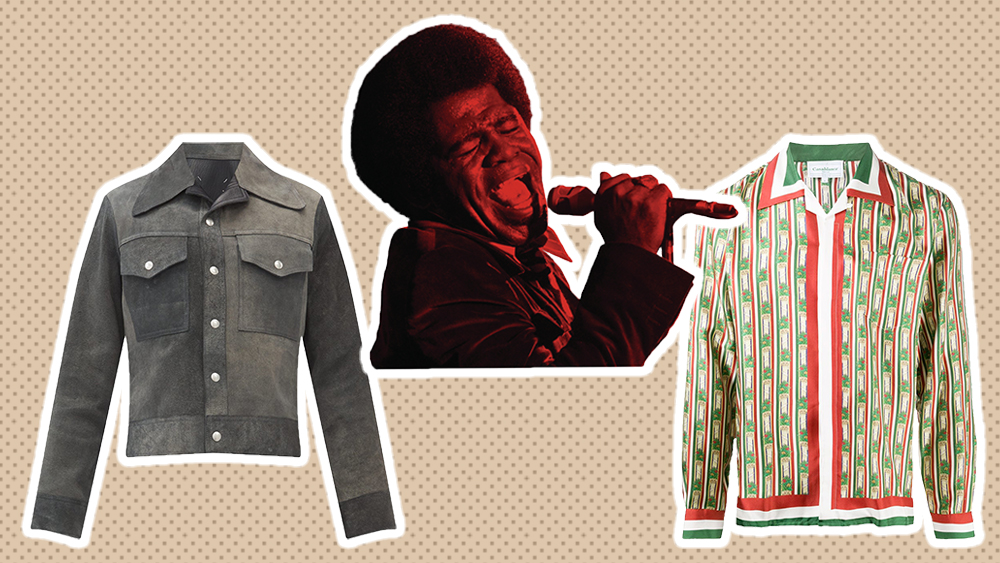 James Brown is most often described as the “Godfather of Soul.” That’s a grand nickname, but it’s merited: over his five-decade-long career, Brown transmuted gospel music into modern, secular sounds that still retained the heart of a soul singer. Powerful and full of pure funk, he was one of the first ten inductees into the Rock and Roll Hall of Fame and a vital influence for many later music genres. But Brown wasn’t just a singer. He was a virtuosic performer, coining his very own on-stage shuffle, swinging his mic stand up and down and regularly dropping into splits. His fashion sense was just as iconoclastic.

Much like his sharp vocals and spirited delivery, Brown’s uniform was precise and full of flamboyance. Raised in Georgia, Brown spent his childhood performing buck dances for local military troops, later joining an a cappella gospel group called “The Famous Flames.” Sartorial codes of the Southern gentleman—crisp oxford shirts, bow ties, jet black shades—wove their way into Brown’s wardrobe and, as his fame expanded into the 1960s, he mixed these items with skinny satin suits and double-breasted waistcoats. It was a modern silhouette with classic touches, just like his sound.

Then came the ’70s, the decade during which Brown brought funk to the world. Brown dressed his groove with an explosion of brightly colored suits—often finished with huge satin buttons and extravagant lapels. His go-to accessories were Cuban-heeled boots (what better to shuffle in?) and a sky-high coif (eat your heart out Bruno Mars). This head-to-toe flair would eventually incorporate flared trousers, daringly low-cut jumpsuits, oversized capes and statement sunglasses. It was all pretty excessive, but Brown carried these clothes with assured confidence.

While unabashedly bold, Brown’s way of infusing tailoring with soul—and yes, funk—remains a menswear touchstone. Just look at the current fall collections and you’ll see nods to him everywhere, from Gucci and Tom Ford to Wales Bonner and Missoni. While we don’t suggest trying to ape his look literally (it takes a special man to pull that off), here are seven Brown-inspired pieces that can give you some of his legendary swagger.

James Brown prioritized three things with his suits: sharpness, color and huge lapels. Embrace those in with this suave velvet DB —a perfect texture for the colder months—and your winter style game will be soaring.

Always smart with his accessories, Brown often tied a colorful pocket square around his neck to inject a bit of print into an off-duty outfit. This is an easy style win, and this particular pattern from Drake’s—inspired by historic kilim rugs—feels properly funky.

What would James Brown’s wardrobe be without his collection of waistcoats? We dread to think. Ideally, you want to match it to your suit, but a classic style like this one from Kingsman will always look smart with a pair of dark trousers.

Sure, Brown was a master of extravagance, but his wardrobe also held a fair amount of essentials. His go-to was a black polo-neck sweater. Style this one with the suit previously mentioned for maximum effect.

James Brown loved a flared jumpsuit (cut very low), but it’s a style few others can wear with such panache. We’d suggest flexing your flamboyance through a shirt instead. Chances are Brown would have loved this number from Casablanca.

Super casual style wasn’t really a thing for James Brown. By day, he’d trade his tailored blazer for a statement jacket, most famously cut in a soft brown suede. This one from Maison Margiela is a real beauty—pair it with a shirt and necktie for a faithful nod to the Godfather.

Brown once claimed, “The one thing that can solve most of our problems is dancing.” The best boots to do so in? Black, leather and heeled—aka this undeniably cool design from French label Husbands.