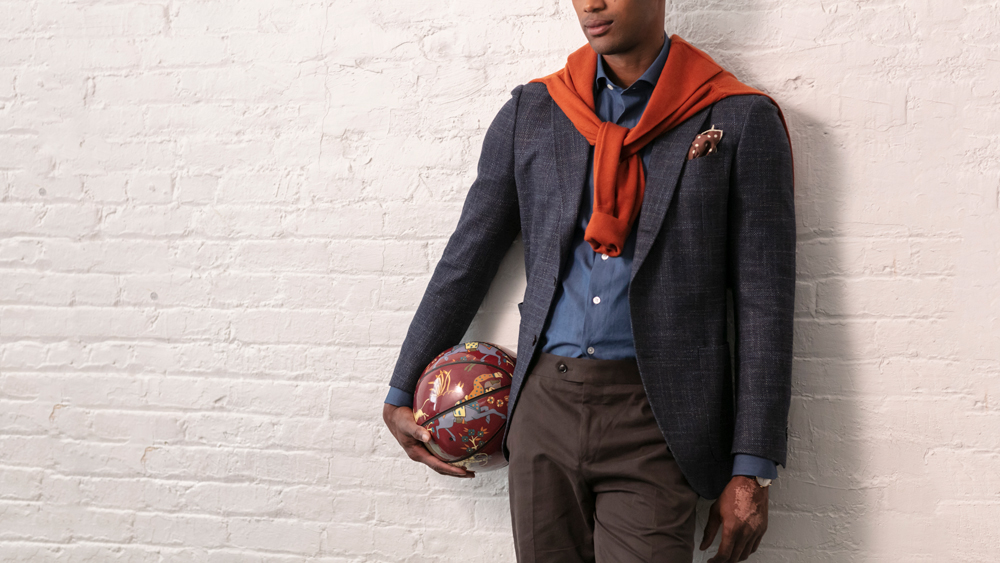 “Savile Row is part theater, part commerce,” explains the sharp suited John Ballay as he stands in Knot Standard’s new showroom overlooking LA’s sunny La Cienega Boulevard. “We’re not trying to replicate that performance.” Instead, the young brand, which Ballay co-founded in 2012 (he’s now the CEO) and has since grown to eight showrooms across the country, has adapted those sometimes-stuffy rituals for the thoroughly 21st-century man, bringing custom-fitted suits (nearly) to the masses.

The process in this new showroom, which features small dressing rooms and fabric books neatly stacked on minimalist shelving, is nearly identical to what unfolds in Austin, New York, or Washington, D.C. A man makes an appointment and comes in looking for a suit tailored exactly to his tastes and proportions; he sits down with an iPad-wielding stylist who walks him through the makes and models (which include modern suits, tuxedos, and more casual separates that can be tweaked and tailored to their exact style); a few quick measurements are taken; and he is out the door, often in under 45 minutes. As little as three weeks later his new suit is delivered, usually at nearly a third of the cost of one made by one of Knot Standard’s predecessors across the pond. Should he want to order the exact same style in Loro Piana’s or Dormeuil’s newest range of ultra-luxe fabrics? No problem. Once his measurements are into the system, it’s as simple as sending a text.

This breakneck pace is made possible by skipping what is perhaps Savile Row’s most fiercely guarded tradition: hand cutting. Instead, Knot Standard’s suits are laser cut and crafted using robotics (typically in China, where the most cutting-edge robo-tailoring technology has been developed) to the digital pattern generated automatically from each client’s measurements. This is why, assuming your body hasn’t changed from your last commission, you can order a new suit with a few clicks from anywhere in the world. No doubt this is a departure that some bespoke die-hards (Robb Report editors included) will balk at, but Ballay insists that it doesn’t diminish the quality of the resulting suit. Instead, he argues that the quality actually gets better when you skip the cutter with a lifetime’s worth of experience. “Typically, when you order a bespoke or made-to-measure suit, it is never exactly right on the first try, even if you’ve worked with that cutter before,” Ballay explains. “With our technology, we are able to produce an identical suit every time because we’ve all-but eliminated human error.”

“We’re trying to scale Old World traditions,” he explains, “and technology helps streamline that process tenfold.” Though Ballay is careful to note that this efficiency doesn’t mean a lack of personalization. Instead, he says clients can work within the brand’s wide range of preset customization options, which include over 70 points of customization per garment and over 7,000 fabric choices, to create their perfect style–an approach that is slightly more defined than the process at a traditional Savile Row house. “If you want the Savile Row experience, it is cool to go through with it. We have clients that have done the more traditional routes, but have made the switch to us because the process here is easier.”