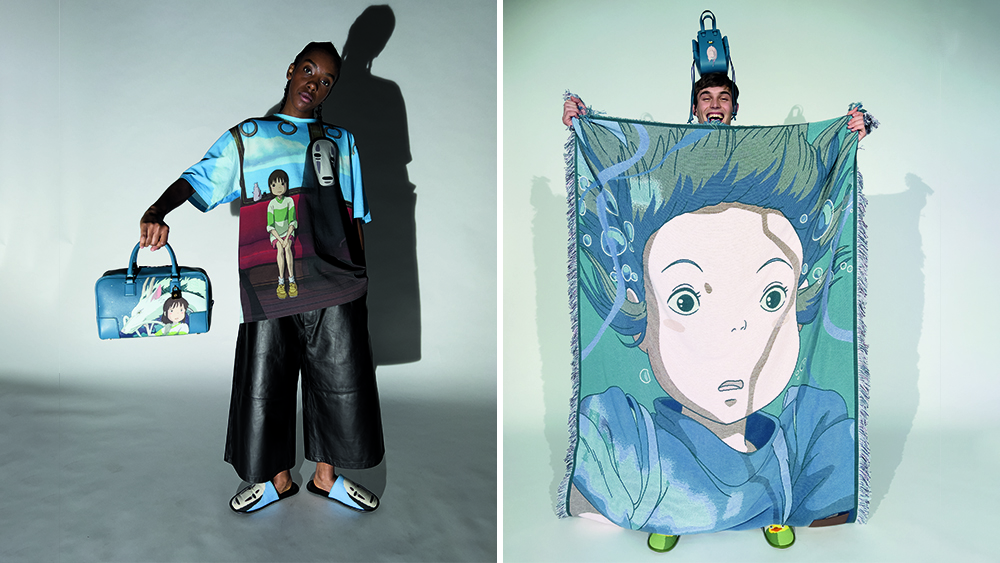 Jonathan Anderson’s Loewe is no stranger to fantasy—or a covetable collab—and now, the brand has unveiled a capsule collection inspired by Spirited Away, one of the most popular and critically acclaimed animated fantasy films of all time.

One does not merely walk into illustrator Hayao Miyazaki’s office and ask to license Spirited Away imagery for clothes and accessories, however. The collaboration is the latest in a multi-year partnership between Loewe and Studio Ghibli, the iconic Japanese animation studio behind Spirited Away, as well as My Neighbor Totoro, which received its own Loewe capsule collection in January 2021. Additionally, the Loewe Foundation announced in October 2021 that it would provide financial support to exhibitions and programming at the Ghibli Museum in Tokyo. A statement about the collection, which is being released January 7, highlights that Loewe and Studio Ghibli share “love for the possibilities of craft—and the painstaking nature of working by hand.”

Such a connection is evident in the clothes themselves. Highlights include a white button-up emblazoned with the character No-Face, a black sweater covered in adorable fuzzy “soot sprites” and cozily cut hoodies showcasing the film’s young protagonist, Chihiro. This being Loewe, handcraft is at the forefront: Many of the pieces are made from intricately woven intarsias and jacquards, and others make use of the traditional Japanese boro technique, which patchworks mended and indigo-dyed scraps.

Fits across the board are generally loose and relaxed, the idea being that these pieces become, as Anderson puts it, “quite simply, a wearable movie.” The accessories are no less fun, with classic Loewe shapes like the Amazona, Puzzle, Hammock bags and more showing cheeky cameos of Spirited Away characters.

All in all, it’s a fun collaboration that is sure to be collected by Studio Ghibli’s many fans, though it has an ethos to which we can all relate. “The idea of creating something, of making, has never been more pivotal than in these times of turmoil, because craft relates to people and there is a clear sense of responsibility for it protects the things that people are forgetting are important in this industry,” says Anderson. “When I was looking at animation, I realized that the connection between Loewe and Studio Ghibli Inc. is a mutual love of craft and artisanal techniques, expressed in the respective languages.”