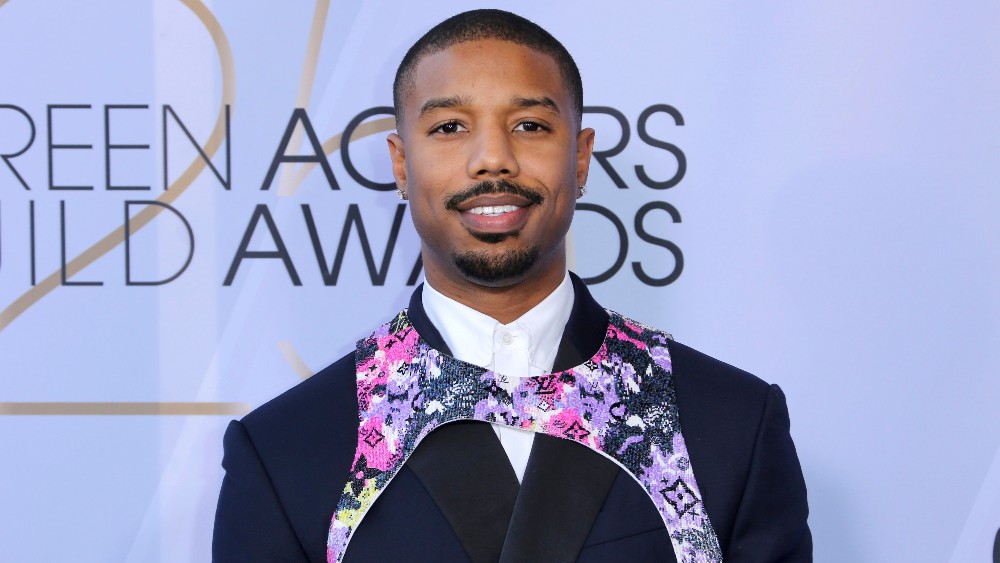 Hollywood’s hottest actors are looking fit to be tied—literally.

At last night’s Screen Actor’s Guild Awards, Black Panther and Creed star Michael B. Jordan walked the red carpet in a classic midnight-blue double-breasted tuxedo with black lapels paired with a crisp white shirt. Over that staid ensemble, though, he wore an asymmetrical harness which featured a painterly print and Louis Vuitton’s signature logos. The entire look came from the luxury brand and played both sides of the label, pitting their traditional tailoring against the more avant-garde flair of current men’s creative director Virgil Abloh.

Jordan’s stylist, Ade Samuel, called the look “classic with a twist” on Instagram, while the actor explained his decision by telling Variety: “Why not? It was just like f–k it. I’m going to do it.” That’s as good a reason as any in our book.

Classic with a twist @louisvuitton custom fit 🥶 || Head over to @whowhatwear IG story at 10am pst TODAY to see my comments on my favorite #SagAwards looks! @michaelbjordan x #AccordingtoAde 💋

And Jordan isn’t the only one embracing this kinky formal-wear look. Boundary-pushing thespian Timothée Chalamet wore a bedazzled harness—also from Louis Vuitton—to the Golden Globes earlier this month.

And while this is certainly a way for stylish A-listers to shake up their formal-wear game, there are other hints that harnesses may just be a real thing for fashion-forward men to add to their arsenal.

Not only is Louis Vuitton currently selling a white and a blue version of the harness—or a “cutaway vest” as they call it—for $2,530, other brands are also dipping their toes into the S&M style movement. Alexander McQueen, for example, is selling a button-up shirt with a floral appliqué harness detail for $995 at MrPorter.com (pictured below) while the up-and-coming British label Craig Green is selling a white poplin shirt ($690) with a black pattern that looks like a yoke. Meanwhile, the buzzy label Alyx has been selling strap-on bags called “chest rigs” and leather torso harnesses for those who think their two-piece suits are looking a little uninteresting and want to spice it up.

Even in the recent Dior Men collections, headed up by designer Kim Jones, tactical-style vests and harnesses have been spotted. And while we’re guessing that 99.9% of guys will give this one a pass, there are even hints of the harness in the less-daunting cross-body bag trend that’s currently at its height that everyone from Gucci to Prada are offering up.

Still, there are obvious pitfalls. Fashionista warned that “If you choose to follow in Chalamet and Jordan’s sartorial footsteps, be prepared to face some criticism from confused passersby and industry insiders alike.” However, the site notes that with great risk comes the potential for great reward: “Hey, it’s a small price to pay for flexing on the ‘gram, right?” Indeed.