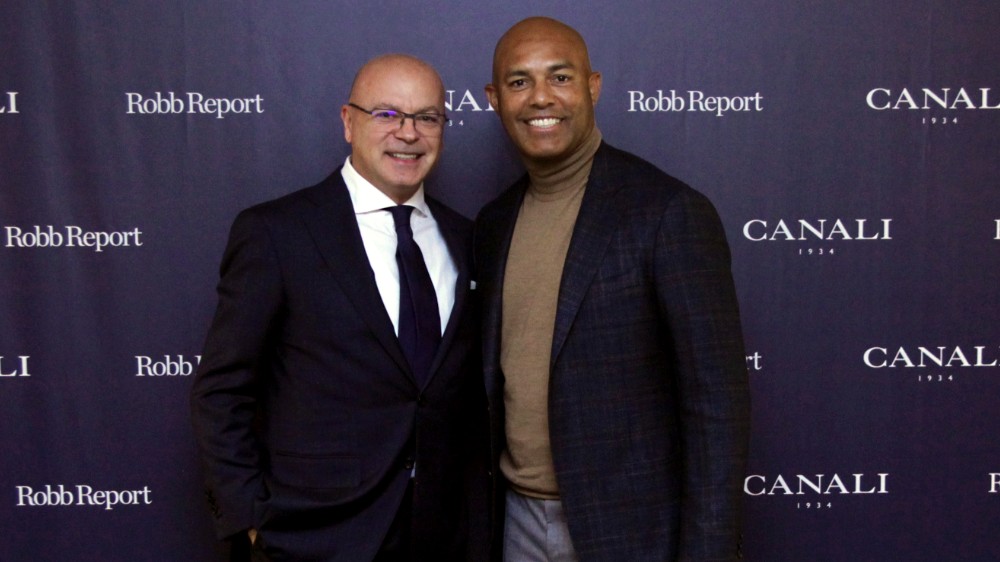 New York Yankees great Mariano Rivera knows exactly what he likes. Throughout a 19-season career that saw him become Major League Baseball’s all-time saves leader and the first player to earn a unanimous induction to the Hall of Fame, Rivera showed that when something worked for him—whether it’s his team or his famed cut fastball—he stuck with it. And things aren’t any different off the diamond, where the pitcher has formed a decade-and-a-half-long relationship with Italian menswear brand Canali, even starring in an ad campaign for the brand in 2010.

On Thursday night, Canali, with a little help from Robb Report, closed down its Madison Avenue boutique to fete Rivera. A packed house of friends, family and fans were on hand to pay tribute to baseball’s greatest closer and one of its most elegant pitchers. But before that, the former ballplayer sat down with Robb Report to talk about his own personal style, the bond he’s formed with the brand and his beloved Yankees.

How’d you pick your outfit today?

I don’t like to be too colorful, too flashy. I like to be conservative. I want something I feel good in and that I like. It doesn’t matter if it’s high-quality—if I don’t like it, I won’t wear it.

What is the first thing that sticks out to you about an item of clothing, be it a shirt or jacket or suit?

Good fabric, definitely. Something you feel comfortable in, whether it be linen, wool, cashmere. All that stuff. You just want something that feels good on your body. Something that you can wear. That’s what I like. I don’t try to be difficult, but at the same time, I like to be comfortable.

You and Canali go back years now. How did the relationship start?

When I was playing I would go shopping all the time. I went to a guy in Westchester County, he had this store and there was a Canali suit there. He had some kind of connection with the Canali family and introduced me. I felt comfortable with them. They’re a good family. They represent themselves well.

What was it about the brand’s clothing that drew you in?

The style and the fabric. The style is very classic. Not flashy, not throwing colors and other things in your face. But at the same time, the fabrics feel so good. A lot of men, when I’m wearing my suits, they ask me, “Mariano, what are you wearing?”

Are there any specific items from the brand that stick out to you?

Oh, I have a few. I have a cashmere jacket that I’ve had for 10 years and I don’t want to give up. They feel so good when I wear them. I have a few items, but that one—I have a few of it—is amazing.

Why does the brand still resonate with you after all these years?

I’m a man that when I have a relationship with someone, I’m a friend forever. I like to represent Canali’s product and will continue to do that.

So those sorts of connections are important to you?

It’s October and we’re in the midst of the playoffs. How do you feel about the Yankees this year?

I feel great. We have been in positions like this before. [Editor’s note: the Yankees are now down 3-1 to the Astros in the American League Championship Series.] I always believe we have the players and they will continue fighting.

You were known during your career for your ability to perform under pressure, especially during the playoffs. Do you miss being out there this time of year?

No. I did everything in my power not to miss it. When I left the game, I was happy and content with my career. I loved it! But I don’t miss it. I did enough of it.

But you still keep up with the team?