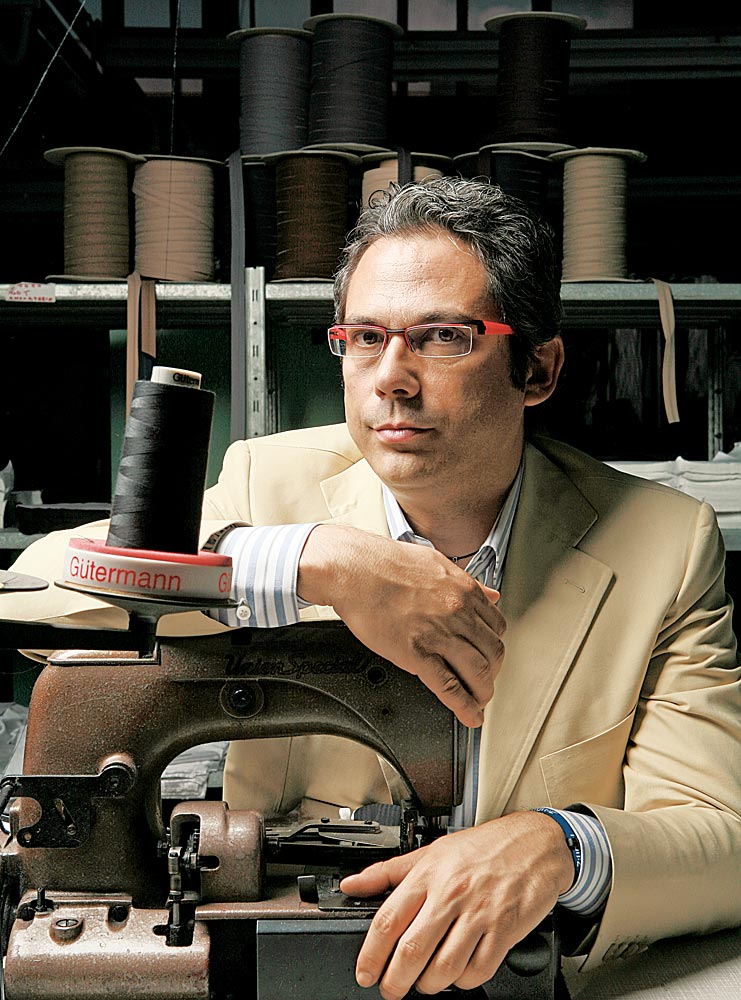 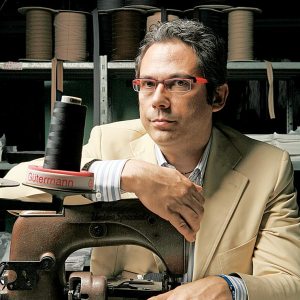 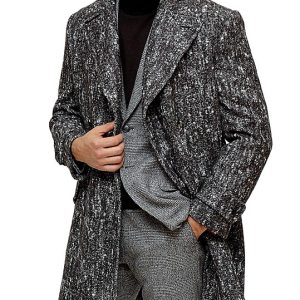 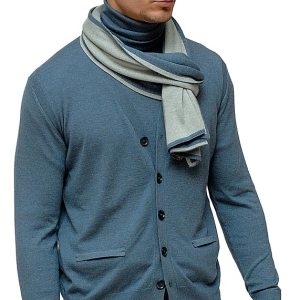 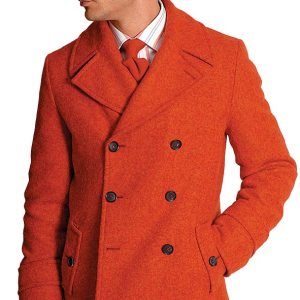 A glass of red wine that accidentally spilled on his trousers prompted Italian fashion maverick Gianluca Isaia to explore the possibility of creating a waterproof fabric made entirely of natural fibers to protect his luxurious suits. After months of experimentation with an Italian textile mill, he unveiled a waterproof wool fabric called AquaSpider, from which evolved a series of innovative, proprietary Aqua materials that are the foundation of Isaia’s stylish new designs.

The 45-year-old’s inventive spirit and unabashed knack for mixing classic, tailored lines with edgy materials and colors have pushed this third-generation suitmaker to the forefront of Italian fashion. Isaia’s distinctive design philosophy will be on vivid display in December at the long-awaited opening of his flagship boutique on Via Verri in Milan’s Golden Triangle shopping district.

The Milan store reflects its owner’s singular sense of style and somewhat unorthodox pairings, which have included a $5,000 plaid cashmere suit with inexpensive leather fisherman sandals. But, Isaia insists, there is a like-minded customer for his quirky mode of dress. He describes his client as “a man who is comfortable enough in his own skin to take the best of one world and combine it with something from another, to create a style that is uniquely his own.”

This idea informs the aesthetic of his new store, a two-level, 3,000-square-foot space bedecked in warm woods and cool, white, hexagon-cut Carrara marble that strikes the right balance between classic and contemporary. The main level showcases the full collection of suits, sportswear, shoes, and accessories; pieces are arranged on mannequins in the way that Isaia foresees his apparel being worn on the streets. The upper level offers ready-to-wear designs and an area devoted to made-to-measure clothing that includes an interactive lounge with touchscreen monitors detailing each garment’s construction and materials.

Not immediately visible is the shop’s VIP club room. It is tucked away on the second floor and has a bar, sofas, and—in keeping with Isaia’s playful personality—a PlayStation. The by-invitation-only club serves Isaia’s best customers and those who require privacy when they shop. “It will be like a little men’s club, but it will also offer a place to have a little fun,” says Isaia, adding that the store’s mix of masculine sartorial style with easy sportswear will appeal to the man who is just as comfortable in a denim emporium as he is in a tailor’s shop. The Milan location is the first fully owned Isaia store in a series of shops scheduled to open in Shanghai, Macao, and New York before the end of 2009.

This expansion into the retail arena represents a new era for the Italian fashion brand, which was established in 1957 by Isaia’s grandfather, a textile salesman named Enrico Isaia. Enrico’s three sons eventually succeeded him in the business, and by the time Gianluca entered the company in 1989, it was already known for producing suits for major American retailers such as Brooks Brothers, Paul Stuart, and Louis Boston, among others. Nevertheless, Isaia, who grew up in the age of designer sportswear, wanted to create a younger, more modern kind of tailored clothing he might wear himself.

Thus his collection fuses the look of signature designer jackets (the short stature and slender lapels on sport coats by Gucci and Yves Saint Laurent come to mind) with the precision hand-tailoring that is characteristic of classic suits by Brioni and Kiton. The suits, which start at about $3,200, are cut with slightly pinched shoulders and a high armhole that gives the illusion of a trim waist. The distinctive canoe-shaped chest pocket, called the barchetta, is used by any number of Italian tailors, but Isaia also crafts its own pocket variation called the pignattiello. “This is a very typical Italian pot in which we cook beans,” Isaia says of the pot-shaped patch pocket that graces many of his suits and sport coats. Even the trousers have been modified: Isaia’s are athletic and lean but not uncomfortably snug, and they are rarely pleated.

Yet Isaia’s inventive use of fabrics, which began with the creation of AquaSpider, defines his collection. This waterproof wool is produced by treating the individual yarns before they are woven into cloth, rather than by applying a protective membrane to the finished fabric. The technology has inspired an entire range of Aqua fabrics, including AquaCashmere, AquaChino, and, for spring 2009, AquaLight, a superlight wool with half the weight of its conventional counterpart. Isaia is also giving classic textiles a contemporary edge. He favors the look of vintage suit textiles but dislikes their heavy appearance and feel. His solution has been to scour a century’s worth of mill archives to find bold checks, stripes, and plaids that he can reproduce in lighter-weight materials and modern color combinations, such as this fall’s Napoli blue, bright orange, tan, and various shades of gray. Moreover, he translated the traditional, heavy Falkland Island wool—a popular fabric for overcoats in the 1930s—into a lighter-weight cloth called Tonic for his new collection.

“My grandfather was in the cloth business, selling to the best tailor shops in Naples, before he opened his own company,” recalls Isaia, who has made creative fabrics his signature. When he introduced sportswear in 2002, for instance, he chose a blend of cashmere and alpaca for jean jackets. Even his sweatshirts are made of cashmere. This year, when he unveiled his first collection of travel bags, Isaia made them from the same AquaCashmere cloth found on the brand’s new Superga-designed sneakers, which start at $395. As an extension of his love for unconventional materials, and to encourage his clients to express their individuality, Isaia is inviting customers to bring their old jackets—whether they are from Isaia or another brand—to his Milan store to have the fabric reworked into a pair of Superga sneakers designed for Isaia. His goal, he says, is for clients to “never have to throw away an old jacket.”

The Best Wireless Charger Stands to Power Up Any Device