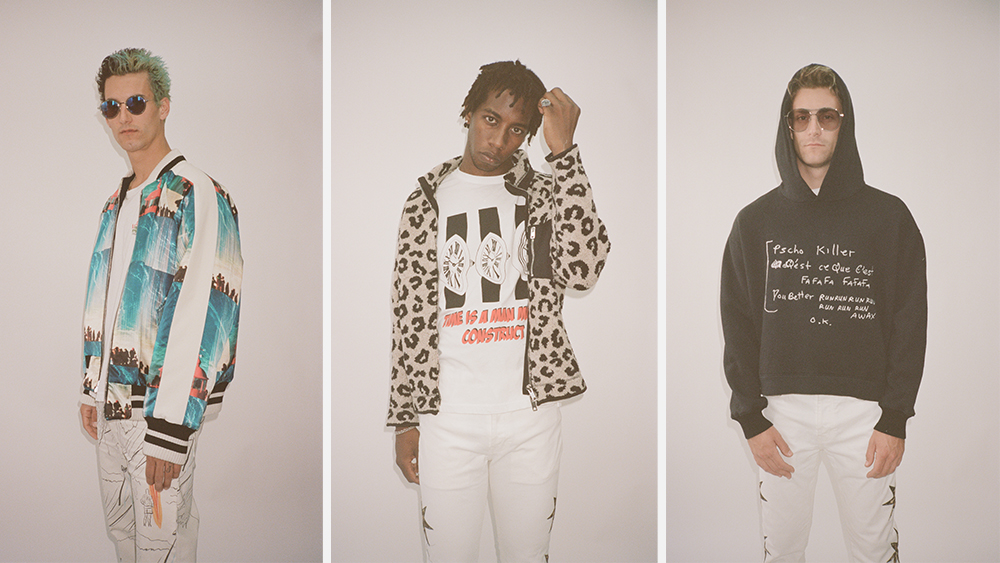 Lost Daze makes clothing for those who aren’t afraid to be shrouded in mystery. When it comes to both its backstory and its price point, this luxury streetwear brand is pretty much the polar opposite of accessible. The two-year-old, LA-based label began generating buzz, seemingly out of nowhere, when Kanye West was spotted in one of its $1,500 tiger print cashmere-bouclé fleeces. Travis Scott sported Lost Daze jeans in his music video for Hot; Usher wore a Lost Daze silk shirt to Grammy’s after-parties. Eager to learn more, I reached out for an interview and quickly discovered that this wasn’t your typical hype beast brand. Rather than the usual designer banter, I got a series of pseudo-philosophical, Yoda-esque ruminations.

“Is there ever really a beginning?” the anonymous design collective behind the brand muses when asked about its origins. “I’m sure it must have started somewhere, but I can’t seem to remember. A modern calendar would show two terra-years, but I haven’t felt that way in a long time.”

Designed by a team of creatives who are adamant about maintaining anonymity, the Lost Daze collective has 15 years of experience in fashion (a bit of digging on LinkedIn revealed tenures at Amiri and Outerknown). While the brand’s ethos may be esoteric, its designs are anything but. Lost Daze’s breed of funky, SoCal-psychedelia has been picked up by retailers like Moda Operandi and The Webster and cultivated a long, diverse list of A-list fans including Offset, Diddy, Heidi Klum, and Takashi Murakami. Still, the designers confess that they have yet to dress their dream customers: “John Mayer and Ray Kurzweil.”

When asked to describe the Lost Daze aesthetic, the team offers a string of inscrutable, rhetorical questions: “What does a vintage shirt from the future look like? Which year of the Atlantis Outer Reef Galaxy Classic had the best merch? What do you put on to grab a coffee on Venus?” The answer, ostensibly, is a wardrobe of embroidered leopard-print wool bombers in blousy silhouettes, intarsia-knit cashmere cardigans with illustrations of skeletons, half-and-half silk button-downs that combine clashing patterns like tarot iconography and fiery car crashes to maximum visual effect, and t-shirts emblazoned with cryptic one-liners like “Crying Room” and “Dead on the Inside” — of course.

Oblique as the designers are on many points, they are very clear when it comes to quality. The items are “manufactured from the finest materials” like Italian leather and double-faced cashmere and “pieced by hand by local, highly skilled craftsmen,” with prices that range from $300 for a t-shirt to almost $1,900 for a trucker jacket, although the designers assert “you cannot put a price on a memory.” Right. When asked how Lost Daze differs from other luxury streetwear brands out there right now, the team quips: “Our street is the passage of time along a rapidly eroding linear plot.”

Each season’s offerings are accompanied by a short story that reads more like a riddle. The most recent chapter, “The Splendor of Space,” features a time traveler, Piglet, and his brother, Pooh, as they explore a new world founded after the polar ice caps melted. The tales are meant to unpack the existential inspiration behind the clothing but, more often than not, they obfuscate the collection’s meaning altogether. “Years ago, we began feeling memories that may not be ours,” the enigmatic designers say. “Our team felt it was imperative to collect these stories and find their greater meaning, much like a dream journal for other people’s dreams. Or maybe they’re ours? Who knows.”

Details on a pair of Lost Daze jeans.  Lost Daze

“Our goal is to continue to tap into the underlying connection between the contrasting ideas of techno-futurism and nostalgia,” the team explains. “Ideally, the growth in awareness of our own mission and goals will allow us to align with other like-minded and different-minded people on the same journey.” Adding: “We are on a journey with no destination and no origin. It’s all gravy.”