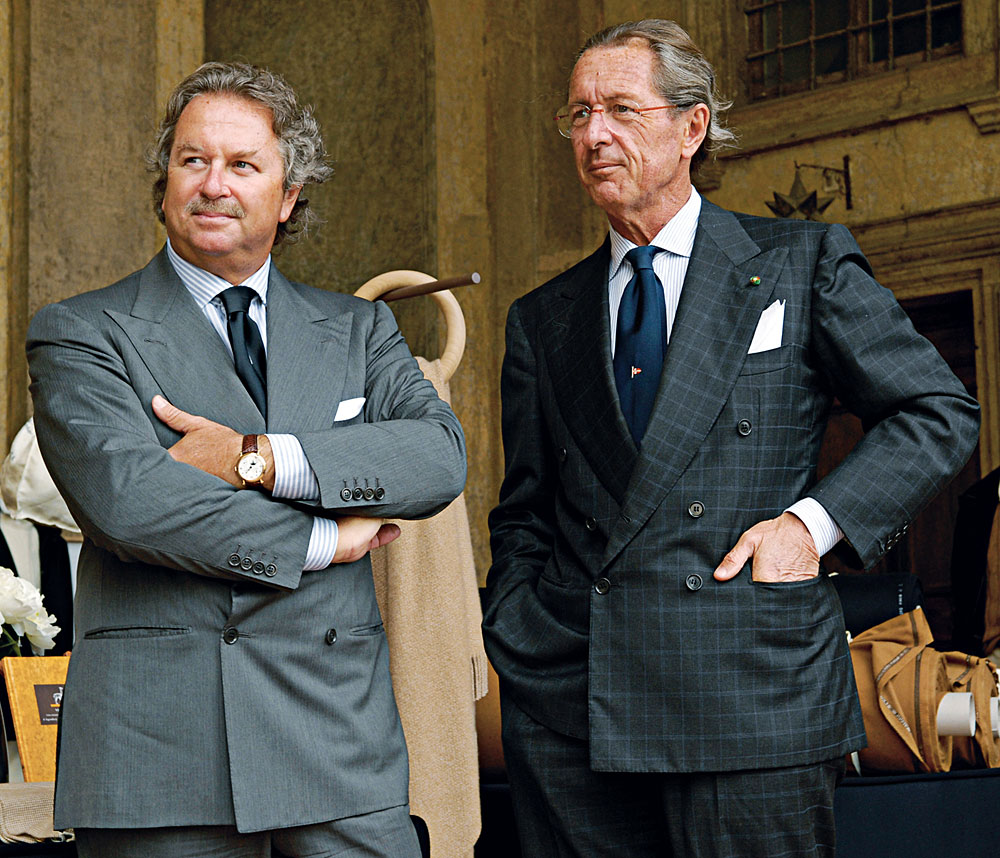 Somewhere in the Altai Mountains of Outer Mongolia, Pier Luigi Loro Piana and an army of rifle-toting security guards have reached their destination. Their caravan of jeeps has traveled for 15 hours along dirt roads from the village of Dadal, just north of the country’s capital, Ulaanbaatar. It is an arduous drive, but Loro Piana, the Italian textile tycoon, has grown accustomed to it; he has been making this trip every spring since the mid-1990s, and he often returns in late fall. The guards are here to protect the bags of cash that Loro Piana has brought with him: The nomads he has come to meet do not accept credit cards or checks for the fleece of the baby Hyrcus goats that they breed.

A city of gers, or Mongolian tents, has been erected around a temporary wooden fortress in which the business of buying and selling commences; these transactions will continue for three or four days. One by one, the farmers enter the compound with their bundles of baby-cashmere fleece, each carrying from five pounds to as much as 100 pounds. They present their bundles to Loro Piana, who scrutinizes the fiber like a gold prospector looking for fat flecks of ore in his sieve.

Loro Piana, who has spent most of his 58 years studying the raw ingredients of textiles, relies as much on his sense of touch as his sight to determine whether a farmer’s offering meets his standards. The fleece must have been combed off a Hyrcus goat—not sheared—before the animal was a year old, and each strand must measure 13 to 13.5 microns in diameter. Above all, the fleece must be pure, not mixed with denser fleece from mature animals—a not-so-secret trick that farmers use to transform small payloads into much larger ones. Because Loro Piana will pay more than twice as much for baby cashmere as for regular cashmere, the incentive to cheat is compelling.

Loro Piana’s namesake textile-and-clothing brand is the only foreign company allowed to deal directly with Mongolia’s goat breeders, rather than through a broker. The Mongolian government granted him this permission because he has supported the country’s lucrative cashmere industry for years by sharing his technical know-how.

Loro Piana, a convivial man known to friends and family as Pigi (a contraction of Pier Luigi that rhymes with “Fiji”), is as comfortable speaking with the head of a major U.S. department store as he is with an Australian merino sheep farmer. He brings a sense of humor and much enthusiasm to his negotiations with the Mongolians. Together with his older brother, Sergio—the brand’s 60-year-old co-chief executive—Pigi has leveraged his unprecedented access to the nomads into his company’s status as the exclusive distributor of baby cashmere, whose cultivation the Loro Pianas pioneered.

At first, the herders were reluctant to collect this fine wool, both because the baby-goat population is small (and the yield is therefore low) and because catching and combing each animal requires considerable time. “It took us 10 years to convince the farmers to comb the goats for the first time at an earlier age—between three and 12 months—and then store the raw material until we go there to collect it,” says Sergio, who is being interviewed while on a yacht in the Mediterranean during the Loro Piana–sponsored Tre Golfi yacht races. Sergio is taller than his brother and has glasses and a more serious disposition. He notes that a kid goat produces a meager 30 to 40 grams of superfine fiber only once in a lifetime, while an adult goat can produce 150 to 200 grams of denser fiber every other year. Because a single sweater requires fleece from 19 kids, Sergio explains, “It took us another 10 years to collect enough fiber to launch our first collection of baby cashmere, which we did in 2005.” (Loro Piana’s fall 2009 baby-cashmere line comprises more than 30 items, including $3,500 throws, $9,000 peacoats, and $13,000 mink-lined knit bomber jackets. The company sells the pieces at its 120 stores worldwide.)

The Loro Piana family’s involvement with fabrics dates to the early 19th century, when Pigi and Sergio’s great-great-grandfather Giacomo Loro Piana worked as a cloth merchant. In 1924, their great-uncle Pietro founded the family textile business in the Piedmontese municipality of Quarona, in northern Italy; the headquarters is still located there. After World War II, their father, Franco, recognized the opportunity to expand the company by exporting its cloths throughout Europe, Japan, and the United States. When Sergio and Pigi joined the business in the mid-1970s, they immediately put their stamp on the brand by exploring New Zealand, Australia, and the Chinese Himalayas in search of rare raw materials from which the company could produce finer fabrics.

Loro Piana’s sales have increased from $2.5 million in 1975 to approximately $620 million last year. Although Sergio and Pigi, at this point, could easily turn over control of the business to the family’s next generation and retire relatively young to their neighboring Portofino beach houses, they have chosen instead to live as modern-day Marco Polos.

Before leading them to Mongolia, their quest for the rarest raw fibers took the Loro Piana brothers to the Peruvian Andes, home of the vicuña. The vicuña is a once-endangered animal whose fur typically measures a nearly microscopic 12 microns or thinner—about one-sixth the thickness of human hair. The brothers intended to reintroduce the material made from that fur, also called vicuña, to menswear.

That task proved to be formidable. Sergio says, “By the time we arrived in Peru, in 1981, the Peruvian government was essentially treating vicuña and cocaine the same.” For a cut of the profits, he says, politicians routinely turned a blind eye to the poachers who were slaughtering the animals. As with the Mongolians, it took more than a decade for the Loro Pianas to convince the Peruvian government that it was sitting on “the Ferrari of fine fibers” and that it would ultimately make more money if it controlled the distribution (and thereby the price) of the fiber. The key to that was persuading the Andean campesinos, or rural folk, to develop a way to catch and shear the swift-moving vicuñas and sell their fleece to the highest bidder.

Eventually the campesinos and local government were persuaded to change their way of doing business, and in 1994, the Peruvian government named the Loro Pianas to the head of a consortium that would control the worldwide distribution of vicuña. (The consortium also included the Peruvian-owned Incalpaca brand and Italy’s Agnona.) The Loro Piana firm was soon in control of the world’s largest supply chain for the precious fiber, and it eventually was weaving much of the vicuña cloth used by bespoke

Suitmakers worldwide and producing its own small collection of vicuña fashion items. So when their agreement with the campesinos ended in 2003, the brothers spent the next five years pursuing a way to continue sourcing vicuña; they wanted to protect a 22-year investment that was paying lucrative dividends.

Last May, during the annual Grand Premio Loro Piana Piazza di Siena equestrian event in Rome, the Loro Pianas announced that they had purchased 5,238 acres of land in the Andes, in Peru’s Lucanas region. The plot sits at an elevation of about 12,000 feet. Looking every bit the fashion mavericks, in almost-identical double-breasted gray suits with exaggerated peaked lapels, the brothers told the audience crammed inside the Villa Medici that they were in the process of fencing the land—which is about six times as large as New York’s Central Park—and converting it into the world’s largest privately held vicuña reserve. It is illegal to own vicuñas in Peru, but by owning the land the animals live on, Loro Piana has secured its source and eliminated the need to bid against its competitors for the right to sell the fiber.

“Suffice to say it’s going to remain a small operation, but a very important one in terms of prestige,” Sergio says. “I don’t know anyone who would spend 30 years to acquire 200 animals just to satisfy a dream to have access to the finest fiber in the world.” Then, after a pause, he adds: “Except us, of course.”

Sergio and Pigi’s travels have led to discoveries of fibers even rarer and finer than vicuña or baby cashmere. Since 1997, the brothers have conducted an annual contest among merino-wool growers in New Zealand and Australia, rewarding the one who cultivates the finest fiber. The company uses these extra-fine wools (the reigning champion wool measures 11.7 microns across, which is finer than even vicuña) for its Record Bales collection; they are transformed into 50 tailor-made suits only after a finer wool is found. In 2002, the brothers also formed an alliance with New Zealand sheep farmer Fiona Gardner. She bred a flock of unique black sheep whose wool Loro Piana now uses in its Pecora Nera (Italian for “black sheep”) clothing collection.

“Because we are family-owned we can follow a long-term vision, even if it seems crazy, and not have to worry about the time and money we put into an operation like the development of baby cashmere in Mongolia, or the many years we did the same to secure vicuña in Peru,” says Sergio. “Our reward is that we are able to open a totally new frontier in the world of fine fabrics.”