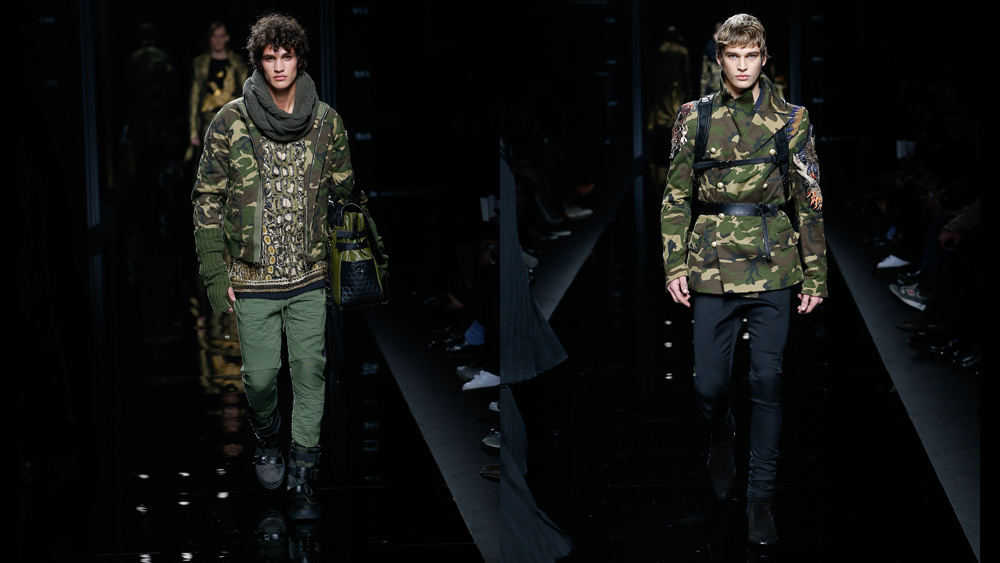 Unlike many passing fashion trends, the military influence seems ever present in the Zeitgeist of modern style. In the late ’00s, cropped officers’ jackets started making the rounds, followed by an onslaught of camouflage in a variety of creative forms.

More recently, both field and bomber jackets have been making an appearance in collections from some of our favorite fashion houses—Hermès, Berluti, and Zegna, among many others. Still, for fall 2017, military looks are continuing to evolve as they head for the runway.

Balmain’s military offerings this year returned to the classic tones of olive drab and traditional camo, though the pieces themselves meld multiple fashion trends. In one look, we saw a camouflage double-breasted field jacket adorned with brightly colored patchwork, blurring the lines between classic field and contemporary statement jacket. A second look revealed a more traditional camouflage bomber paired with muted green moto-style pants in a more technical/athletic fabric.

Both Berluti and Ralph Lauren took a distinctly different approach to their military chic attire for the coming fall. Leaning heavily on earthy browns, Berluti offered up a loosely fitted trench coat with contrasting details on its cuffs and pockets. Ralph Lauren went decidedly monochromatic with its tonal brown outfit, combining sneakers and cuffed trousers with cargo pockets with a more formal single-breasted field jacket, also speaking to the melding of styles seen elsewhere.

Emporio Armani’s latest foray into the military realm is more of a loose interpretation, though both looks are impactful to say the least. First, a patterned black jumpsuit could easily pass as military garb for an upcoming Luc Besson sci-fi flick, while a black, edgy shirt and trouser combo under a luxe fur-trimmed jacket have a faint Top Gun meets The Matrix undertone.