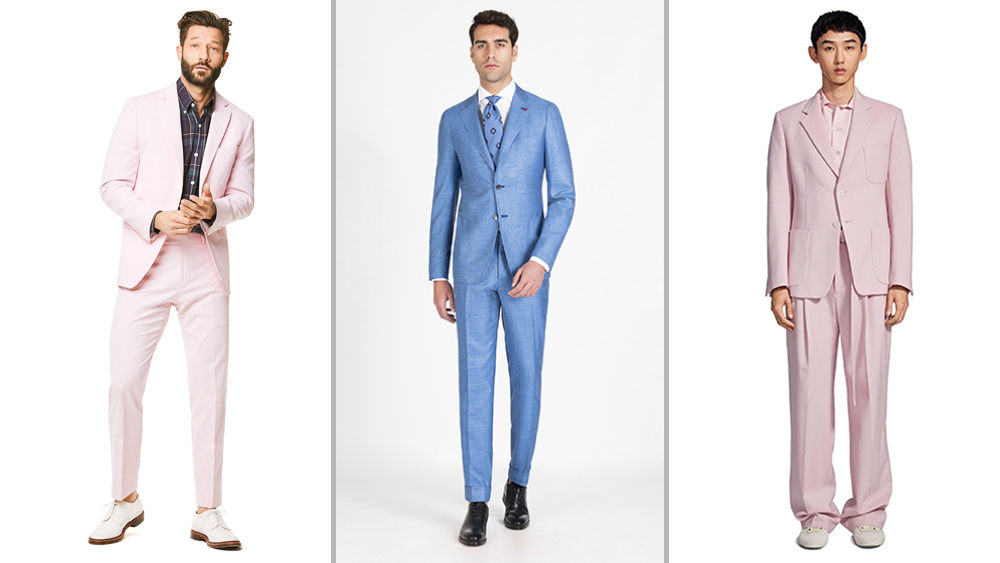 After a long winter of bleak black, navy and gray, spring’s arrival means it’s time to start embracing color. And there’s never been a better time to broaden your palette beyond the standard neutrals. Spring menswear collections were awash in sunny hues, from calamine pink at Dior to Tiffany blue at Zegna. Even if you don’t identify as a particularly dandyish dresser, the beauty of this season’s vividly-colored looks is their remarkable wearability.

And the easiest way to add a hint of tint to your wardrobe is in a classic suit — such a traditional silhouette tempers bolder shades. A colorful suit can be surprisingly versatile, bringing a bit of pep from the office to summer weddings and beyond. We’ve rounded up 13 of the best options available now; so say goodbye to greige and delve into the mood-enhancing, swagger-boosting world of color.

This sherbet-esque, orange suit is muted enough to be worn like a neutral, making it a fantastic alternative to a basic tan. It’s a warm, golden hue that provides a universally-flattering, just-back-from-the-beach glow (Jacket: $4,840; Pants: $1,670; Shirt: $890).

Guys have been avoiding pink for too long, and Todd Snyder’s suit proves why the color is worth reconsidering. This barely-there shade looks just as good with a shirt and tie as it does with a t-shirt and sneakers (Jacket: $448; Pants: $228).

Chances are there’s no shortage of blue suits in your closet— but are any of them half as fun as this cyan linen number? Unexpected but still supremely elegant, this suit ($4,425) manages to make Mediterranean breeziness boardroom appropriate.

Formal wear can be so predictable. But this suit ($4,300)— in emerald green mohair with a subtle sheen — strays from the norm without going too far. It’s an ideal marriage of propriety and personality.

Nothing says summer quite like the combination of coral and linen, making this suit a winning choice for warmer months. Think of it as a way to wear your Nantucket Reds beyond the beach (Suit: $1,295; Shirt: $275).

With its unlined construction in a featherweight cotton poplin, this suit has all the ease of a t-shirt and shorts — a lifesaver for those days when the temperature makes wearing a full suit seem torturous. Even better, break it up by teaming the jacket with a pair of crisp white jeans (Jacket: $540; Pants: $275).

Mauve can be an intimidating color for most, but Paul Smith, a master of irreverent suiting, makes it a picture of country club perfection in a lightweight Loro Piana wool, punctuated with windowpane checks (Jacket: $1,230; Pants: $775).

Seersucker is a summer staple, but Paul Stuart punches up the old classic by swapping the usual muted blue for a vibrant turquoise. The cut may be traditionally natty, but the eye-catching color and laid-back patch pockets have a refreshing appeal ($1,895).

A monochromatic suit, like this stone blue stunner from Lardini ($1,275), lets superior fabrics and finishes truly shine. In this case, it’s a subtly textured cotton-linen blend finished with intricate tone-on-tone to-stitching. And even with all that fine craftsmanship, it still wears like your favorite chinos.

This suit nods to decades past with a seventies-style wide leg pant and a fifties-era powder pink, but its look is unmistakably modern. It’s a prime example of off-duty tailoring: polished yet far from fussy (Jacket: $1,595; Pants: $795; Shirt: $395).

For those who are wary when it comes to testing the waters of colorful attire, Kiton’s suit ($6,995) is a great introduction. The cut and print say quintessential Milanese menswear, but the vivid cerulean blue adds a sly twist — just the kind of neo-traditional mash-up that the Italians do so well.

Embracing color doesn’t only mean brights and pastels; deeper tones can have just as much impact, as evidenced by this suit in a rich burnt orange ($1,698). Pair it with a denim shirt for spring and summer and dark knits come fall.