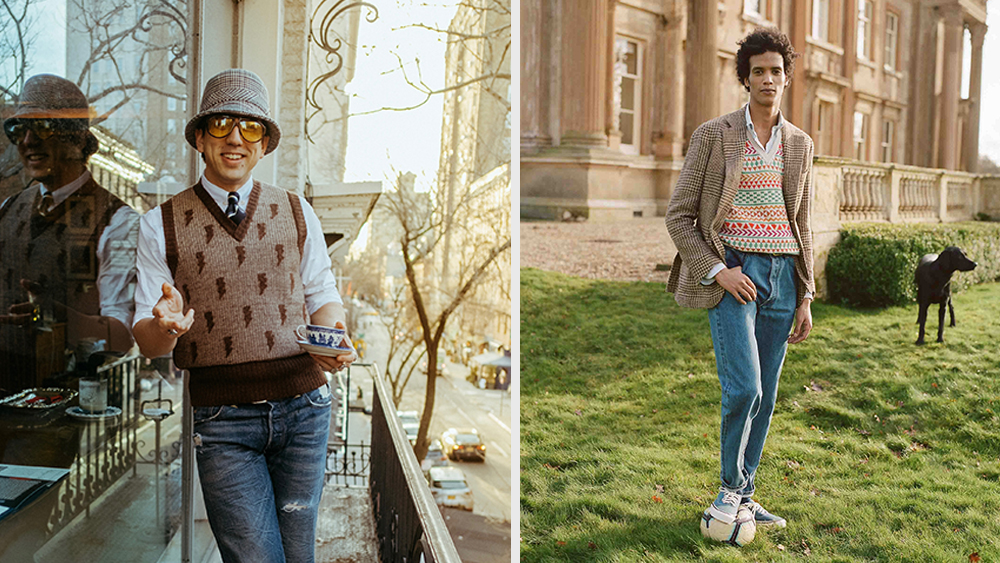 Until recently, the 21st century has not been kind to the sweater vest. When it did appear in the popular culture, it was invariably of the drab, finely knit and solid-colored variety that either indicated a cold scold, fussy poindexter or some combination of the two: think Andy Bernard from The Office, Jonah Ryan in Veep, and former Republican presidential aspirant Rick Santorum.

Now, deep into spring 2021, it seems as if the promise of the bold sweater vest is finally being fulfilled. As part of its first collection of the new year, Drake’s dropped a multi-color take on the Fair Isle vest that replaced traditional designs with a more contemporary and abstract geometric pattern. It quickly sold out online. And Ralph Lauren, which regularly offers a Fair Isle vest with each season, introduced a kaleidoscopically colorful option made from 11 different yarns and marked by motifs resembling roses and horseshoes.

While each represents a more dynamic turn, Fair Isles have long stood on the funkier side of the sweater vest spectrum. The pattern itself is named after one of the Shetland Islands off Scotland’s Northern coast, whose knitters created geometrically patterned sweaters using multiple colored yarns of hearty Shetland wool. The Fair Isle sweater may have remained a local curiosity if not for Edward VIII, the Prince of Wales, who brought them to the attention of the British aristocracy and soon the rest of the world.

There’s no scarcity of traditional Fair Isle vests on the market today, and many makes from the 128-year-old Shetland knitter Jamieson’s feel sufficiently bold for the current moment. However, there’s nothing quite like commissioning a Fair Isle of your own, a service that knitter Irina Lapko is happy to offer.

Lapko, who has more than a half-century of knitting experience under her belt, has assembled a library of hundreds of Fair Isle patterns discovered through pattern books, exhibitions and more. It typically takes her four weeks to complete a Fair Isle vest, which she knits entirely by hand from Shetland wool to ensure perfect pattern matching and to eliminate the need for seams.

Her Fair Isle Vests, which begin at $1,100, can be commissioned via direct message on Instagram (with the caveat that there may be a waiting period, dependent on workload). Among her recent clients is the English artist and designer Luke Edward Hall, who commissioned a Fair Isle vest incorporating the Greek motifs that feature in his own work.

Hall, who considers the sweater vest a staple in his spring and autumn rotation, enjoys the contrasts they create. “I like the effect of shirt sleeves next to the patterned knit, and they work well under jackets too.”

Another entry in the bold fold comes from New York-based designer F.E. Castleberry, who recalls sporting the style as a high school student in the late 90s. “Sweater vests are deeply nostalgic for me,” he says.

Castleberry’s jacquard v-neck vests are hand-loomed in New York and made-to-order with a three-week turnaround. They lean into decidedly maximalist territory with abstract geometric motifs or a repeating lightning bolt pattern, making an impression that feels more Downtown and less Brideshead Revisited.

“While I think of them as preppy first, they could also be punk,” says the designer. “Punk has always been about appropriating what was perhaps considered establishment. We like to blur the lines between both.”

This boundary-crossing ethos also applies to how Castleberry incorporates them into his wardrobe. “I love wearing them with a button-down shirt underneath, sometimes with a tie, sometimes with jeans or tailored trousers. For women, I like them often without anything underneath. They’re terribly versatile.”

Such versatility may be the sweater vest’s greatest virtue, even at its boldest. As a garment that is, by definition, an in-between, it’s that much easier to pull off.