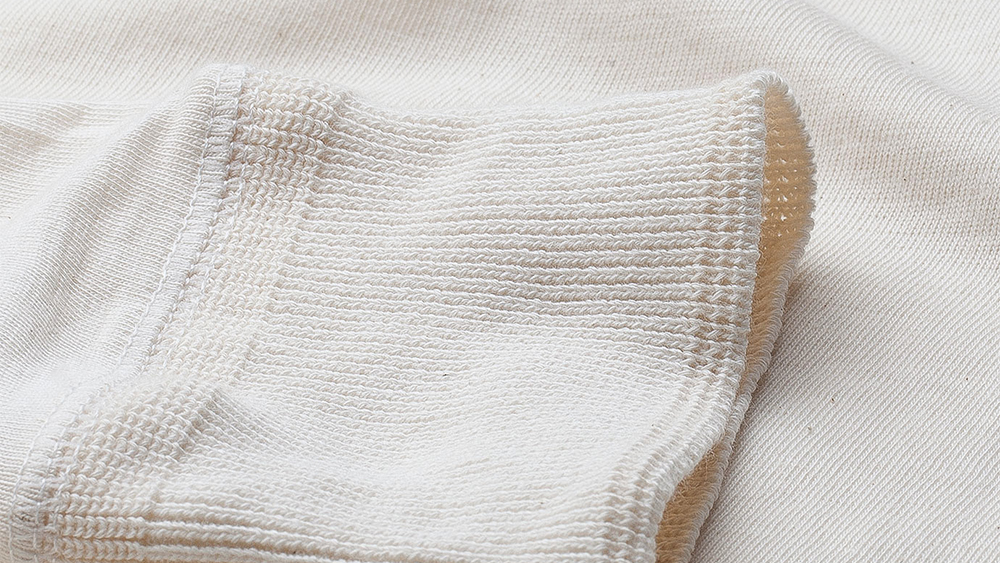 Reviving a historic manufacturer is a challenge. But repurposing it from a behind-the-scenes maker that the world was never destined to know into an international brand? That is quite a mission. However, Peter and Gitta Plotnicki didn’t think twice about nurturing Merz b. Schwanen back to life, despite the considerable legwork required.

Back in 2010, the Plotnickis were puttering about a flea market in Berlin when they discovered something Peter reverently tells us was “destined to alter the course of our lives.” Said discovery was a humble work shirt from the maker Merz b. Schwanen, a company that was established in 1911.

A labor of love: Peter & Gitta Plotnicki.  Merz b. Schwanen

“It was slightly washed out, but still soft,” Peter reminisces. “It was made of natural cotton fabric and had a flat knitted rib with wonderful details. It had triangular inserts under the arms, and the label with its lettering made with fine viscose threads. On top of that, it had no side seams. But more importantly, the fabric was so unique and rare. We had never felt a jersey like this before.”

An old workshirt doesn’t sound like anything to write home about, but it was to the Plotnickis. The following year, which conveniently coincided with the company’s centenary, they had the German knitwear maker from the Swabian Alps back up and running. Prior to embarking on this resurrection quest, the couple worked as freelance designers in the textile industry and, over the course of 20 years, collaborated on several projects together. As a result, rebuilding a business together wasn’t an entirely alien concept. “We love designing garments, creating and having the chance to make thoughts and ideas become a reality. It simply makes us happy,” Peter says.

Despite the excitement of relaunching the business, the immediate challenge they faced was a big mechanical one. “The machines are from the 1890s to 1960s, so how long was it going to take to revive these old loopwheelers, and are we going be able to find spare parts?” Peter explains. It wound up taking a whole year to restore the machines; the duo own currently own 30 of them. “The machines are reliable, but not perfect. The small irregularities within the fabric are an essential part of the garment’s characteristic look and feel—a bit like ‘good times gone by,’” he adds.

The second challenge they faced was their audience. “Could we enthuse customers for these authentic clothes made on original loopwheelers?” Thankfully, the answer was absolutely and, today, the brand can be found at the likes of No Man Walks Alone, Trunk Clothiers and The Rake. These three retailers are known to be discerning and detail-orientated, and clearly, they understand the appeal of Schwanen’s basic garments—sweatshirts, T-shirts and underwear—made the old-school way.

The fact that Merz b. Schwanen produces its garments on these vintage machines is what sets it apart from the competition. “The big difference between the modern circular knitting machines and the old loopwheelers is that on old ones you don’t knit, but warp. This is quite a technical aspect. In contrast to knitting machines where you knit row after row, loopwheelers warp the fabric loop by loop,” Peter explains.

The end result is a garment without a lateral seam—when made with top-quality raw materials like long-staple organic cotton, this ensures products that are comfortable, durable and long-lasting. “You don’t have any tension in the fabric,” Peter adds. Furthermore, the machines don’t create much waste as nothing is cut away to construct the final garment. It’s the antithesis of most mass-produced jersey basics on the market: prioritizing slow, thoughtful craftsmanship and a lighter ecological footprint.

With next year drawing scarily near, Peter and Gita will soon be celebrating their 10th anniversary at the helm of Merz b. Schwanen. As ever, the Plotnickis are marking the milestone with their typically understated attitude. “We try to stay focused and keep an eye on our vision. We simply want to make good basics,” Peter concludes with saying.

If this year is anything to go by, we should all be investing in the very best basics, built to last, and let the statement pieces go by the wayside. Merz b. Schwanen’s succinct, timeless collection is certainly one to rely on, whatever lies ahead.