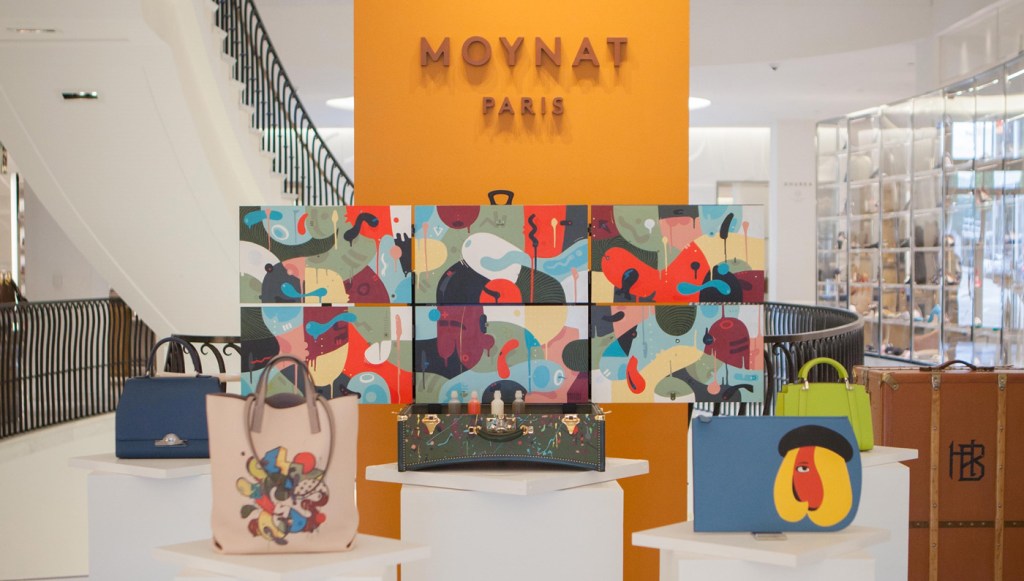 After opening its first U.S. boutique on Madison Avenue last year, luxury French leather house Moynat has headed out west. Established in 1849, the Parisian heritage brand—known for exceptionally made trunks and leather goods—opened its traveling “Le Trunk Show” at Barneys in Beverly Hills on February 6. The shop-in-shop has previously touched down in Paris, New York, Tokyo, and Seoul and will be open for the next six months at Barneys before heading off to the next destination. The Los Angeles version of the pop-up will feature exclusive designs from Moynat’s collaboration with Mambo, a Franco-Hungarian artist and L.A. transplant best known for his energetic and colorful street art.

The Mambo for Moynat collection delivers a playful sensibility to the brand’s signature leather marquetry range—the permanent line features designs of trains and early 20th-century-style cars.  The collection’s centerpiece is a paint-splattered limousine trunk featuring a design assembled from pieces of canvas cut from the flooring of Mambo’s studio, and the trunk is equipped with a fold-out easel. Other pieces include whimsically designed document holders and totes that all feature graphic marquetry detailing or hand-painted elements ($460 to $2,400). Our favorite is Mambo’s take on the Sweetness Galaxy Quattro tote (priced at $2,400), which punches up the extremely functional design (it features two sets of handles in varying lengths and is reversible) with an expressive graffiti-style graphic hand-painted on the stone-colored top-quality Taurillon Gex leather.

The traveling Le Trunk Show is the latest move to announce the return of the storied brand to an international audience. Founded by Pauline Moynat, who in 1849 was the only female trunk-maker in the world, the company closed its doors in 1976. Since being revived by luxury powerhouse LVMH in 2011, the brand has opened flagships in Paris, London, and New York as well as boutiques in eight other cities around the globe. Ramesh Nair, Moynat’s creative director since the brand’s relaunch, has focused on updating its designs for the modern traveler. Under his direction, the house’s designs now include shoulder bags, totes, and—of course—hard-sided trunks that feature whimsical and luxurious details, but remain firmly connected to the house’s practical roots. (moynat.com; barneys.com)