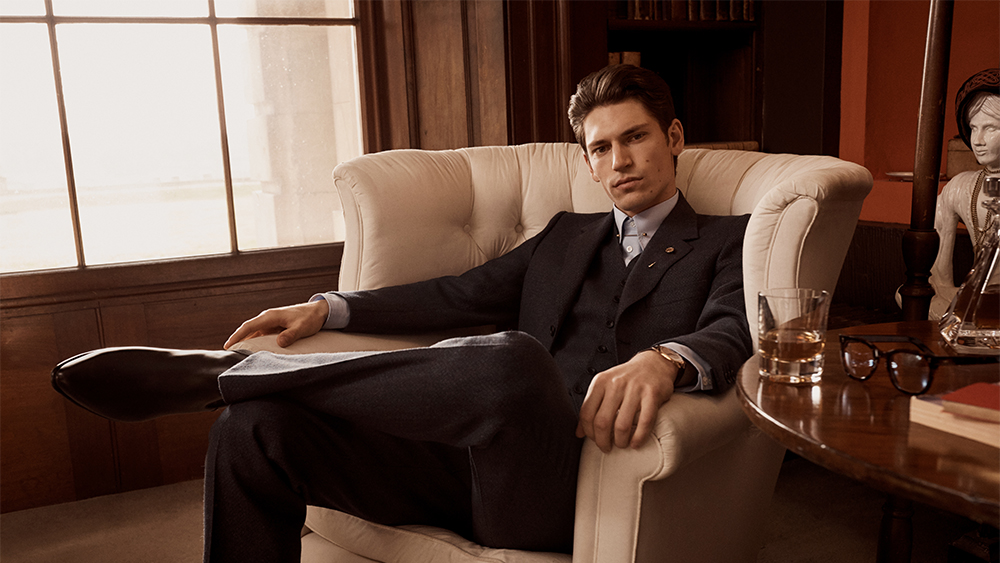 The escapist pleasures of a great movie have been made especially clear over the past few months. With nowhere to go, an engrossing film is about as close to a getaway as one can get. But, for the sartorially inclined among us, a handsomely outfitted movie has always carried a certain joy: not only is it entertainment, but it’s also fashion catnip. Few films of recent memory have demonstrated a dedication to style that rivals the Kingsman series—after all, a tailor shop not-so-loosely based on Savile Row’s Hunstman is film’s namesake. While the much-anticipated prequel The King’s Man had its release postponed until February 2021 due to the pandemic, its costumes are ready to inject a bit of nattiness into your life right now, via the latest Kingsman collection on Mr Porter.

The Kingsman collection launched with the first film in 2015, making the enviable wardrobes of the on-screen characters available to us style-minded laymen. Cinematic connection aside, it is a one-stop-shop for a quintessentially British wardrobe, with contributions from such Anglo icons as Turnbull & Asser, Drake’s, George Cleverley and Smythson. Since it first bowed, Kingsman has grown into a robust menswear brand with a life of its own—Mr Porter reports that it has become one of the retailer’s most consistent best-sellers (no small feat when you’re up against the likes of Tom Ford and Gucci).

The latest edition, which launched this week, draws on the WWI-era fashions of The King’s Man in everything from suits and sunglasses to umbrellas and barware—even a Jaeger LeCoultre timepiece inspired by the brand’s historic ‘Couteau’ pocket watch from 1907.

“I think we were all a bit surprised to see that menswear trends from 100 years ago felt so modern,” says costume designer Michele Clapton, who designed the new collection in addition to kitting out Ralph Fiennes, Tom Hollander and co for the movie. “Certain items, like the military-inspired Oxford coat, are near replicas from the film and are firmly rooted in early 20th-century style.”

Of course, plenty of modern menswear staples can be traced to military garb, so this film’s WWI setting offered an especially rich period to mine. And as Sam Kershaw, Mr Porter’s buying director, notes, the era’s fashion is well-synced with menswear this fall: “There is an obvious military moment happening. From combat boots to field jackets, we’ve seen designers and consumers embrace the utilitarian trend both on and off the runway.” On that front, Kingsman includes rugged burnished leather outerwear and a killer pair of boots from Cleverley.

But as any viewer of the previous films will know, tailoring is at the heart of the Kingsman world. Kershaw counts the collection’s three-piece suits as his personal favorites from the new lineup. Where the suits in the film, dapper as they are, feature high, roped shoulders and dense fabrics, the Kingsman collection gives the three-piece a more au courant ease. “We re-wove the fabrics to be lighter and reworked the shoulder to give it a looser feel,” he tells us. “A lot of work went into making these changes, but when you put it on, you’d never notice the difference.”

And as Clapton points out, the three-piece is due for a reappraisal: “Today, three-piece suits are most often used in formal settings; in the 1910s they were an everyday staple…worn as casually as a pair of jeans.”

For those less inclined to a waistcoat, there are some equally debonair double-breasted numbers. “Four-button, double-breasted suits were a prevalent trend during the early 20th century but have also had a resurgence in recent years from the likes of The Row and Gabriela Hearst,” says Kershaw. Other standouts include penny- and pinned-collar shirts from Turnbull & Asser, a dusty green velvet smoking jacket and an array of cozy knits.

As the most diverse Kingsman collection to date, the latest offering is brimming with options for both town and country. Even more additions will drop in February alongside the film’s release but, until then, Kingsman is a sartorial escape in itself. If you can’t watch them on the big screen, you can cop their style in real life.