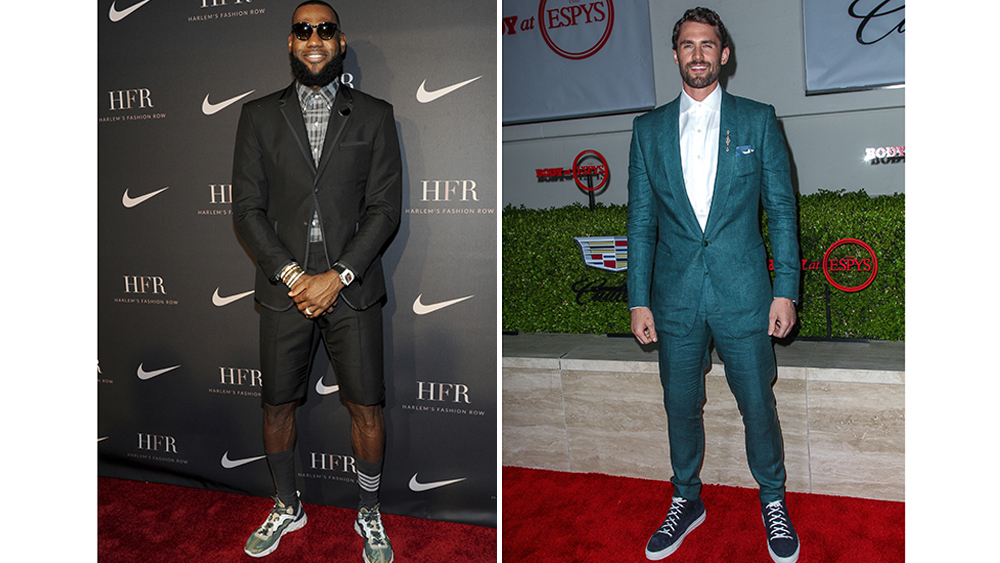 As one of the few leagues to continue playing with relative normalcy over the past year, the NBA has been a boon to deprived sports fans. It has also been catnip for menswear aficionados. In the absence of fashion runway presentations, the arena entrances of today’s style-obsessed gladiators are a viable showcase for fashion trends. There is no shortage of Instagram accounts, such as @LeagueFits, devoted to the likes of Los Angeles Clipper Serge Ibaka preening in fit-for-purpose Tom Ford, or James Harden and P.J. Tucker flexing in print-on-print getups on the actual red carpet that the Houston Rockets have rolled out in the tunnel before games.

Not surprisingly, at a time when original Air Jordan 1 sneakers are fetching more than a half-million dollars at auction while influential sports like golf remain trapped in a fashion sand trap, the design world has rushed the sidelines like Spike Lee at a Knicks playoff game. At Fendi, Silvia Venturini Fendi has created an activewear collection inspired by the game, right down to the logo-laden high tops. In a first for Louis Vuitton, the prestige house’s menswear designer, Virgil Abloh, a hypebeast magnet and avowed Chicago Bulls fan, has collaborated with the NBA on an ongoing collection of haute sportswear comprising the basketball equivalent of boardroom-to-cocktail-party dressing: everything from game-arrival gear to travel essentials, such as the label’s signature bags plus dapper blazers and trousers for mandatory press conferences.

Meanwhile, Rhuigi Villaseñor, the Philippine-native designer of Rhude—which counts Dwyane Wade and Kevin Durant as customers—is a superfan who claims to have learned English by watching Kobe Bryant’s post-game interviews. “I mimicked the swagger, the eloquence and the way he spoke with a purpose,” Villaseñor says of Bryant, whose “Black Mamba” jersey, which Bryant co-designed with Nike, has consistently sold out since his unexpected death last year. “It helped me understand the power of language and influence,” he says. Similarly, the low-key luxe offerings of cult label Fear of God, as well as its sportswear-inflected collaboration with Ermenegildo Zegna, are inspired in no small part by the oversize blazers, tucked-in T-shirts and jeans—roomy enough to fit a basketball in each leg—worn by stars such as Michael Jordan on their travel days.

“Jordan really nailed his look when he started out,” says Fear of God designer Jerry Lorenzo. “The jeans got a little too baggy towards the end, but in the early ’90s, he was it, and remains a big influence of mine.”

Fashion and basketball are a mutual-admiration society that makes sense, says Kesha McCleod, a celebrity stylist who has dressed everyone from James Harden and Chris Bosh to Rosie O’Donnell. “It’s a business, and looking good is part of the game,” says McLeod, who has previously worked with NBA rookies, giving them a crash course in style as part of the league’s onboarding. “You’re not going to get the Coca-Cola deal or a brand ambassadorship with the look that basketball portrayed back in the day.”

McCleod is referring to the baggy clothes, do-rags and chains-over-shirts popularized two decades ago by former Philadelphia 76er Allen Iverson, which then-commissioner David Stern targeted, in 2005, with an NBA dress code requiring players to wear business-casual attire at all league-related activities, including press conferences and charity events. It was a controversial attempt to make the game more marketable and led to a lot of ill-fitting suits as well as accusations of racism, given the dress code was largely targeted at hip-hop style in a league of mostly black players.

Ironically, that dress code, since relaxed, has ushered in a virtuosic embrace of menswear at its most expressive, exemplified by the sartorial derring-do of stars like Kevin Love, Russell Westbrook and LeBron James, who owns a proper fashion-plate moment in a shrunken Thom Browne short-suit with an alligator man bag.

If the cut of one’s tailor has become an extension of a player’s personal brand, a part of the canon of masculine connoisseurship alongside cars and cigars, it helps that today’s status-conscious exemplars of male glamour are combative by nature. “It’s like seeing your friend have a great bottle of wine and wanting it, too,” McLeod says. “These guys are highly competitive and are pushing each other to be more expressive and original.”

But fashion, as any astute observer will attest, is one big retro cycle. It remains to be seen whether LeBron and Co. will jump on the bandwagon of average Joes everywhere in ditching their designer tailoring for the type of baggy sweat suits that would make Allen Iverson proud.