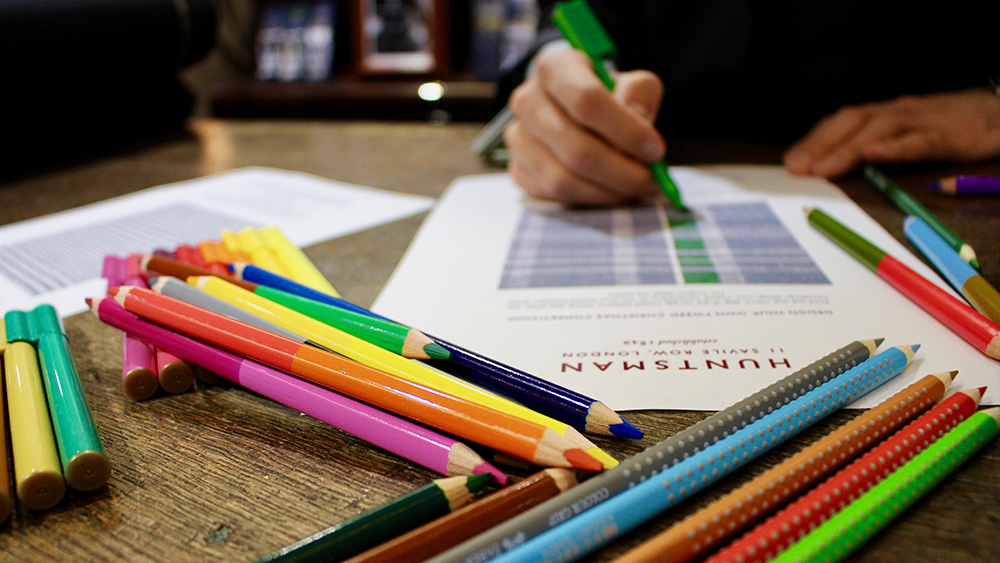 Tweed, that most sturdy and brawny of weaves, was created as a performance fabric in the Scottish Isles to endure inclement Caledonian winters. It became stylish in the 19th century for its association with aristocratic sporting activities; landowners would create their own “estate tweed,” the colors often mimicking moorland hues. For those who fancy playing lord of the manor, without the hefty upkeep of the shooting lodge, Savile Row’s Huntsman is offering the public a chance to design their own tweed. The winning design will be produced by one of the brand’s Scottish mills and crafted into two pairs of customized slippers.

Now in its third year, the competition was inspired by the 170-year-old tailor’s Bespoke Tweed service, which allows clients to let their imagination run wild and commission their own signature design — some diverting from the old-fashioned rule that one’s tweed shouldn’t scare the birds. Since tweed has morphed from country to town, it is now fully acceptable to wear more playful offerings, so this is a chance to let creativity take over. It’s an ideal project for those that are currently confined to home quarantines.

Once the winning design is chosen, a sample will be woven in-house at Huntsman, which boasts the only working handloom on Savile Row. The Huntsman tailors will fine-tune the colors of the initial swatch before it is sent to Huntsman’s family-run mill in Scotland to be fully produced, registered within the Huntsman tweed archives, and crafted into the winner’s bespoke slippers, emblazoned with one’s choice of insignia.

The brand has an illustrious past, dressing everyone from David Bowie to Coco Chanel to Queen Victoria’s Household. The competition allows you to follow in the footsteps of such boldfaced names as Gregory Peck and Hamish Bowles, two of the many notable clients who have called on Huntsman’s Bespoke Tweed service to create one-of-a-kind threads.

A judge surveying entries in the inaugural Design Your Own Tweed competition.  Huntsman

“Designing your own tweed is now available to all. Huntsman is delighted to offer entrants the opportunity to understand a tweed’s provenance, whilst being daring and creative with color,” says Pierre Lagrange, owner of Huntsman. “The competition gives entrants a direct look into the Huntsman archives and how our exclusive house tweeds have been created for over 170 years. Each year we have been astounded by participants’ designs and are always inspired by their creativity. We look forward to receiving this year’s submissions.”

The entries will be reviewed by a distinguished panel of international judges, including Robb Report editor-in-chief Paul Croughton, who will cast their votes on the top twenty. From there, Campbell Carey, creative director of Hunstman, and Lagrange will choose the winning design, which will be announced on June 3rd. Participants can enter by downloading one of four tweed patterns from Huntsman’s website, coloring it  and sharing their designs on Instagram with the hashtag #HuntsmanTweed2020 by May 6th.