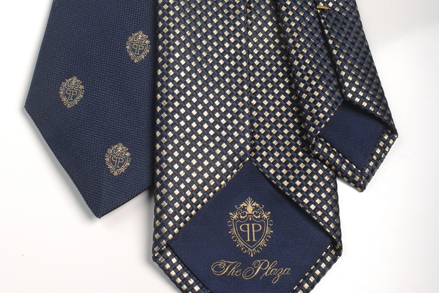 When Robert Valdes-Rodriguez was working as a Wall Street banker he wore a lucky designer-made tie that he credits with helping him close deals with numerous corporate chief executives, hedge-fund managers, and international finance officials.  However, when the classic blue pin-dot tie began to lose its luster and it was time to replace it, Valdes-Rodriguez was disappointed to learn the company no longer made that particular model.  That disappointment led to a career change and the introduction this fall of RVR neckwear. Now the former banker creates traditional men’s woven silk neckties, including a replica of his lucky original, which he promises will never go out of style.  He even uses his former profession as a springboard for new tie ideas. “Because I was in the trading business I saw that metals were coming back,” says Valdes-Rodriguez of one of the company’s early best sellers: a $210 Italian silk that’s been dipped in liquid sterling silver. When the buyers at the Plaza Collection, the new retail shops at the newly reopened Plaza Hotel in New York, saw the sterling tie they immediately commissioned RVR to create a signature $300 necktie. The result is a line of navy and 24-karat-gold ties?the hotel’s signature colors?that is currently being sold exclusively through the hotel’s boutique. (646.436.1883, www.rvrneckwear.com)